Time of flight is the measurement of time taken to travel a distance in order to determine distance, speed, or properties of the medium. Time for a signal to reflect off an object is often measured to determine the object’s location.

How is time of flight calculated?

Consider a time of flight example consisting of a light and sensor on one end and an object on the other. A pulse of light travels to the object, is reflected off of it, and returns to a sensor right next to where the light originated: 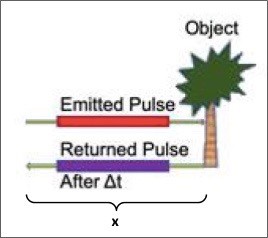 By definition, speed (s) is the distance travelled (d) divided by the time taken (t): s=d/t

Rearranging the equation for speed and inserting our values for distance and speed, we get x=ct/2

Since the speed of light is a known value (approximately 300 million m/s), by measuring the time it takes for light to travel to an object and back, we’re able to measure how far away the object is. This is the basic idea behind a time-of-flight camera.

Using light to measure distance is a common application, but this same idea can be generalized to any object or wave travelling at any speed, through any medium, and the source and sensor do not need to be next to each other. The time of flight principle could then be used to determine properties of the medium, or measure an unknown velocity travelling a known distance.

Is LiDAR time of flight?