LiDAR (light detection and ranging) is a remote sensing method that uses laser beams to create a 3D scan of the surrounding area. LiDAR is an important means of proximity sensing in autonomous vehicles.

What is LiDAR and how does it work?

LiDAR works by emitting pulses of laser light and measuring the return time between the emitted signal and the signal that is reflected after bouncing off of a nearby object. Since LiDAR uses light signals, the distance to the object is easily calculated by multiplying the time of flight by the speed of light. The use of light also makes for very quick return times. 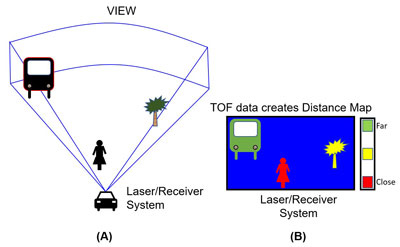 The distance map in (B) shows the objects detected in (A) by a LiDAR laser/receiver system. The closest object (in red) has the shortest time of flight, while the farthest (in green) has the longest.

By continually emitting these short laser bursts, and in multiple directions, the system can create a distance map of all of the surrounding objects that updates instantly and continuously. 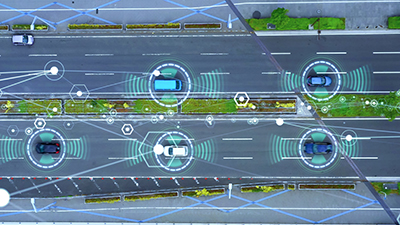 Illustration of autonomous vehicles emitting LiDAR signals in multiple directions to detect objects on the road.

How does a LiDAR laser/receiver system work? 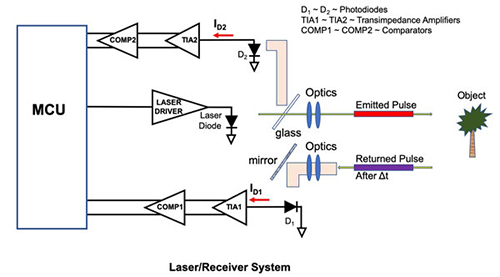 The block diagram above shows a typical operating circuit. The laser driver initiates the light pulse towards the object, and the returned signal reflects into the photodiode D1 which converts the light to current. The transimpedance amplifier TIA1 converts the current to voltage and amplifies the signal to then be sent to the comparator COMP1, which converts the analog signal to a digital one. The D2/TIA2/COMP2 system works similarly to record the initial signal, and all of this information is processed and stored by the MCU.

LiDAR and radar are similar in that they both measure time of flight to determine distance from an object, and the difference is what type of signal they use. Where LiDAR is Light Detection and Ranging, radar is Radio Detection and Ranging, and these are the types of waves that each system emits. Light waves are in the nm to μm wavelength range, where radio waves are in the cm to km wavelength range. 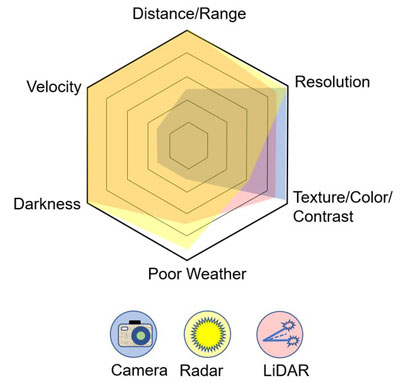 LiDAR’s smaller wavelengths make it able to create more precise and accurate distance maps, detecting smaller objects and greater detail. Radar’s longer wavelength range makes it less sensitive to changes in the medium through which it travels (such as poor weather). Because of these differences, the two are often used together (sometimes with cameras) to form vision and driving capabilities that exceed those of humans.