In this design solution, the key features of the MAX40080, a precision, fast sample-rate, digital current-sense amplifier are introduced and linked to the benefits that they bring to the real-world applications in various industries. In particular, the design solution describes the fast internal ADC sample-rate, the smart modes of the device to save power, and the programmable input range that reduces offset error.

Digital current-sense amplifiers (CSAs) have become very popular in the past few years across a broad range of applications. In additional to measuring current, digital CSAs also find use measuring voltage, digitizing the data with an internal analog-to-digital converter (ADC) and reporting the data in a digital format, typically either as I2C or SPI. Some CSAs also compute power as a digital multiplication of current and voltage.

The advantages over traditional analog output CSAs are significant. First, there are systems where current must be measured at various points and linking all these measurements to a common I2C or SPI bus saves several GPIO pins on the microcontrollers (MCUs). Digital CSAs also save ADCs inside the MCU, freeing them up for purposes other than measuring system current and/or voltage. Finally, often the current measurement happens at a point in the system that is located physically away from the MCU. In this case, transmitting digital data is more robust and noise-immune than sensing a distant analog current or voltage.

Most digital CSAs on the market integrate ADCs with low sample-rate and low bandwidth, normally in the low kilosamples per second (ksps) and kilohertz (kHz) range, respectively. That makes them suitable for applications where the current does not change very often. However, if there is a sudden current change, the system monitoring will miss it. In contrast, the MAX40080 integrates a 13-bit ADC with a programmable sample-rate that can be as high as 1Msps.

In the first example, the fast sample-rate digital CSA measures fast current surges and optimizes system performance in large processors. It monitors power consumption to maximize performance for systems with multiple CPUs, memories, GPUs, etc. It observes which blocks in the system are most power-hungry by monitoring current surges and acting quickly.

In the second example, the fast sample-rate digital CSA enables safe fast-charging of Li-ion batteries. During charging, a metallic lithium (Lithium dendrites)(1) forms on the negative electrode which is eventually a source of battery failure. To prevent dendrites from forming, battery chargers use a train of current pulses instead of a fixed steady current. The fast sample-rate digital CSA enables measuring these current pulses accurately.

The MAX40080 current measurement features a signal bandwidth up to 50kHz. With a sample rate as high as 1Msps, it is possible to oversample the current and voltage measurements and increase their accuracy by using integrated moving-average digital filters. Such filters are programmable with an I2C command register and they range from an average of 8 samples up to 128 samples, with step increments of x2 in between (average among 8, 16, 32, 64, and 128 samples). The averaging process reduces the noise floor and increases accuracy.(2)

The MAX40080 fast sample-rate and high performance requires 2.7mA of supply current when the device is fully active. As always, speed and performance come at the cost of power consumption. However, the device offers smart modes that can effectively reduce power to the point where the MAX40080 becomes suitable even in portable consumer applications such as tablets, smartphones, and notebooks/laptops.

Secondly, there is an internal timeout on the I2C such that if no host commands are received for as long as one minute, the MAX40080 will automatically enter standby mode, reducing power consumption to 2.7µA.

Last and not least, the MAX40080 features four additional modes of operation called "selective active mode" that work with a fixed low sample-rate, from 4sps down to 1/4sps, that consume very little power. The device can be programmed to enter these modes during periods where fast current surges are not expected. For example, in data center systems at night. Note that even in these "selected active modes", the overcurrent threshold and alarm generation are still functioning. If an overcurrent situation happens, it will still be detected, but not as quickly as if the device was in normal active mode with fast sample-rate. 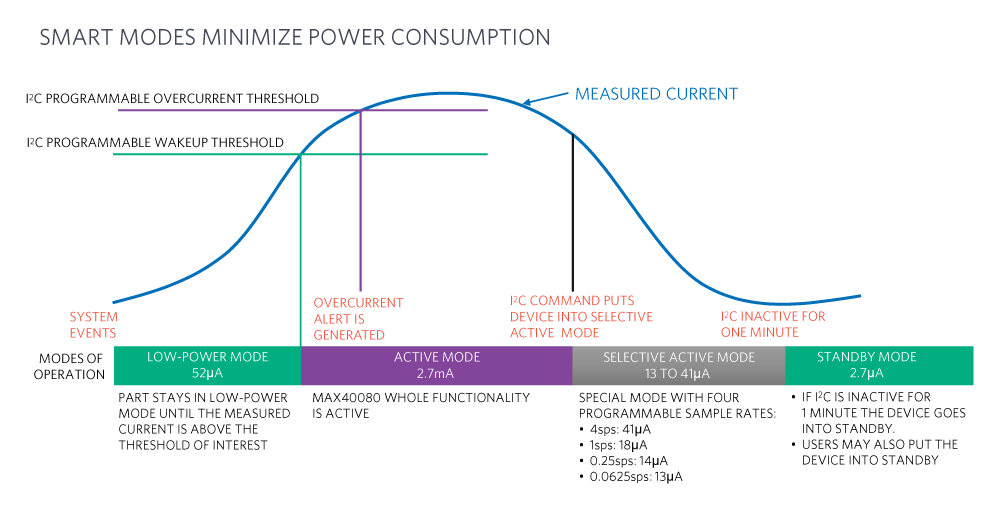 In applications that require measuring two distinct current levels, the accuracy of the lowest level is often compromised because it is limited by the offset voltage of both the current-sense amplifier and the ADC that follows.

A practical example is an IoT sensor system using an MCU with integrated BLE, where the MCU wakes up periodically, takes one measurement and transmits it wirelessly. When the MCU is active, the system current is in the range of tens of milliamps, but when the MCU sleeps, the system current drops into the microamp range. Because the two levels differ by several orders of magnitude, the sleep current measurement suffers from offset limitations.

The MAX40080 features a programmable input range of either ±10mV or ±50mV, selectable through the I2C port. Internally, those ranges correspond to 125V/V and 25V/V gain options, respectively. These two gain options provide the flexibility to measure large and small currents, while preserving system accuracy by reducing the ADC offset error. In fact, thanks to the two gain options, both large and small currents can be brought near the ADC full-scale range making the ADC offset error negligible.

The MAX40080's offset voltage contribution is already low, with only 25µV max at 25°C, which enables using a small resistor value and thereby reduces power dissipation.

The MAX40080 digital CSA is a versatile device that finds a home in broad market applications. The digital output has higher noise immunity than an analog one and allows connecting multiple current-sense devices on the same digital bus. This frees up GPIO pins at the MCU and frees up ADC channels as well.

Because of its fast sample-rate, the MAX40080 can measure current surges and fast transients like those found in computing systems with powerful processors and those in battery chargers. At the same time, it also features smart modes that reduce power consumption and make the device attractive for battery-operated systems such as smartphones, tablets, and laptops. The programmable input range and very low voltage offset enhance accuracy both at large and small current measurements.