The thrill of all-encompassing surround sound is one of the thrills of the modern cinematic experience. Incredibly, AR/VR equipment manufacturers are looking at ways to bring this experience out of the cinema and into the confines of a wearable head mount — also called nearfield surround sound. In this article, we look at the limitations of common audio amplifier solutions before presenting a tiny easy-to-use (plug 'n' play) class-D amplifier and show how it can be used to make this ambitious objective a reality.

“The screen is a window through which one sees a virtual world. The challenge is to make that world look real, act real, sound real, feel real.” The words of Ivan Sutherland, the American computer scientist and internet pioneer who was widely regarded as the "father of computer graphics” succinctly states the challenge of creating a truly immersive augmented or virtual reality (AR/VR) experience (Figure 1). While much effort has focused on creating stunning visual panoplies, attention is now beginning to shift to further enhancing the audio and tactile components of the AR/VR adventure. Indeed, Jeffrey Yau, a researcher at John Hopkins University-Baltimore summarized the results of recent experiments carried out on the relationship between sound and touch. "We hear with our ears and feel with our skin, but our brains may combine this information in specific ways. Frequency information from the two senses appears to be always combined." For developers, this may mean that future improvements on the audio and tactile aspects of AR/VR will be done in tandem, rather than independently and in parallel. 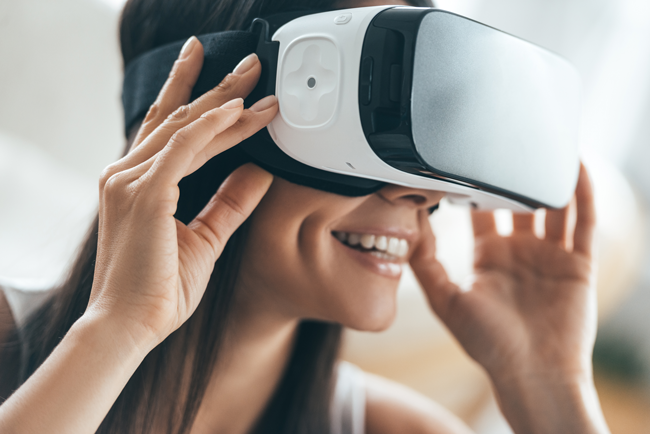 In this design solution, we consider the type of audio experience that high-end AR/VR equipment manufacturers are looking to provide and the challenge of making that possible within the limited space constraints of a wearable head-mount. We discuss the importance of haptic feedback to the AR/VR audio experience before proposing a high-efficiency, plug-and-play digital class-D amplifier that can be easily scaled to achieve both the desired audio and haptic experience in a tiny, space-efficient solution.

Surround sound is defined as a system of stereophony involving three or more speakers surrounding the listener to give a more realistic, modern cinema theater effect. It uses a 7.1 configuration (3 left, 3 right, a center channel, and a sub-woofer) to create an even more realistic surround sound experience. The task of placing eight speakers (plus an amplifier) at various locations, even within a generously proportioned room, to provide optimal sound quality is not trivial. Incredibly, AR/VR equipment manufacturers are now seeking to recreate this same nearfield surround experience within a wearable head-mount (Figure 2). 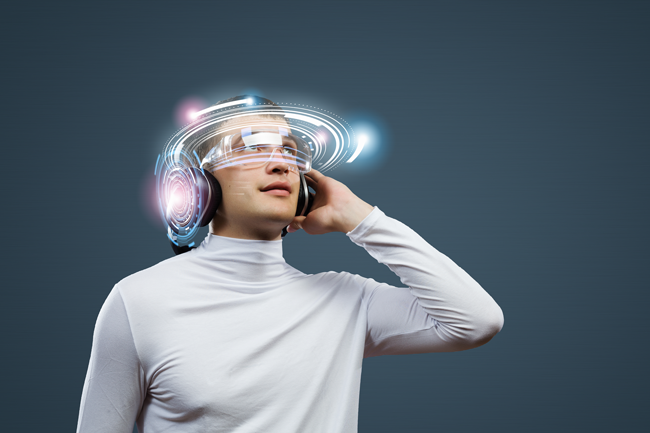 Unlikely as this may sound, they are also looking for ways to use haptic rockers to create audio synchronous reverberations, thereby providing wearers with an even more satisfying sensory experience. As anyone who has been to a cinema to view a film or an auditorium to listen to a classical orchestra will know, sound is only one part of the experience. The coincident vibrations that the audience senses greatly enhance the overall experience.

3D Audio in a Head-Mount

Faced with the daunting task of creating what amounts to the design of immersive 3D audio in a head-mount, the key to making this happen lies in choosing an appropriate audio amplifier to meet the design specification. Interconnecting up to eight speakers within the framework of a wearable head-mount requires using an audio IC that not only comes in a tiny package but also allows for straightforward board routing. The amplifier should be as efficient as possible (90% or higher) with the ability to operate from the lowest possible supply voltage. This helps minimize power consumption and thereby extends the battery life of the headset. Like all modern audio applications, high-fidelity sound quality (high PSRR, low noise, and wide dynamic range) is almost beyond re-stating.

Another critical specification of the amplifier is its EMI performance. With multiple traces traversing various lengths across the board, it is important that the audio amplifier rejects unwanted signal frequencies that could become perceptible if passed to the speakers. As if addressing the audio requirements was not demanding enough, the amplifier must also meet the fast turn-on time needed for synchronous connection to a haptic rocker. If the turn-on time is more than a few milliseconds, the haptic circuitry must constantly be kept awake, even when not in use, which wastes power. By using an amplifier with a fast turn-on time, the haptic circuitry is only active when needed.

Typical But Not Trivial Solution 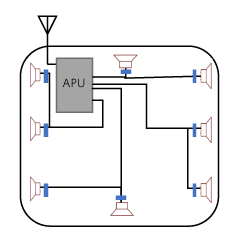 Accommodating four multiwire I2S channels requires a larger board (which may be difficult within the tight confines of an AR/VR headset) and increases power consumption while worsening electromagnetic compatibility (EMC) performance.

The IC shown in Figure 4 addresses all aspects of the design requirements previously considered by using a simpler and smaller solution. 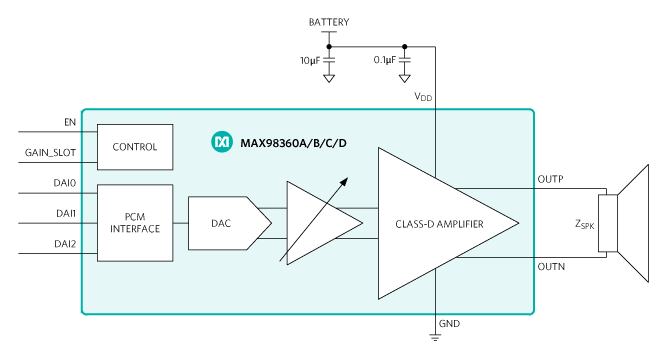 A major advantage of using this amplifier is that it supports 8-channel time division multiplexed (TDM) data. This means that eight different speakers signals can be driven using a single TDM port (Figure 5) from the APU. This greatly simplifies board routing compared to the previous solution and helps keep all of the audio signals in-phase (since they are driven from a single digital audio input port). 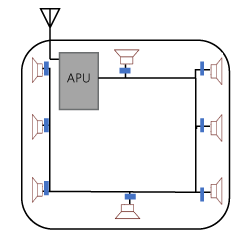 Board design is further simplified by the fact that this IC requires no additional class-D filtering to achieve exceptional EMI performance as shown in Figure 6 (measured using a 12-inch stripline load). 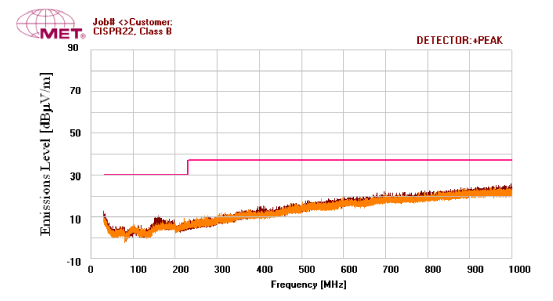 This IC has another notable benefit to help minimize board size/cost. It is available in a tiny 1.9mm2 WLP with a clever pin layout designed to eliminate the need for costly board vias. As shown in Figure 7, the GAIN_SLOT pin (located in the center of the package) can be conveniently connected to VDD or GND (either directly or using resistors) or left unconnected to provide the I2S/left-justified gain settings shown in Table 1. 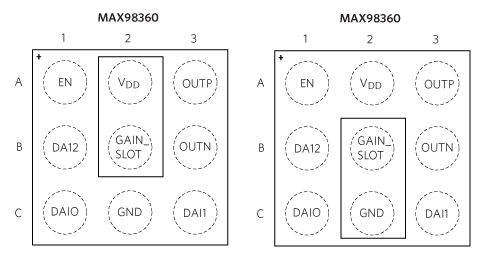 For applications requiring variable gain settings, the GAIN_SLOT pin can be easily routed out using only a tiny 2mil trace with 2mil clearance, as shown in Figure 8. 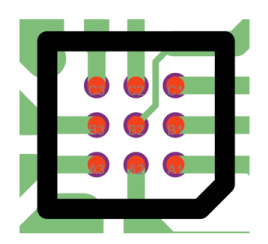 Figure 8. Routing out the GAIN_SLOT pin without using a via.

This IC operates with just one supply voltage, over a wide 2.5V to 5.5V range. Operating at up to 92% efficiency is an important benefit when seeking to extend battery life. It can accept input-logic voltage levels down to 1.2V (meaning level shifters are not required) but it is robust enough to tolerate up to 5.5V. Another useful feature of this IC is that if the DAIx pins are held low, it automatically enters a 1.5µA ultra-low-power, standby mode. This can be used to greatly reduce power consumption in applications where a no-host GPIO is available to control the EN pin. Another advantage is that because it has a very fast 1ms turn-on time (4x faster than similar class-D amplifiers), it can wait in this low-power standby mode even when used with an LRA haptic driver. It should be noted that the EN pin can achieve additional power savings by placing the IC in a shutdown mode where it draws only 15nA of current.

Designers of AR/VR equipment continue to push the boundaries between what is real and virtual. One way they can do this is by providing a superior audio and haptic experience. Once the preserve of the cinema or home theatre, multi-channel audio systems are now being included in high-end AR/VR headsets. In this article, we have discussed the requirements for an audio amplifier to make this possible. We presented a tiny, flexible “plug ’n’ play” Class D digital audio amplifier with the physical and electrical specifications that make it ideal for this application. Apart from AR/VR applications, it is also suitable for use in tablets, notebooks, IoT devices, and smart speakers.

A similar version of this design solution originally appeared in Eelectronic Products on December 14, 2020.