In this Design Solution, a novel architecture for powering an ethanol sensor is presented. This architecture uses a MAX40108 1V op amp to extend the battery life by more than 40% by substantially reducing both the standby current and the average current in active mode

Electrochemical sensors are hidden in plain sight. The most common one is the blood glucose sensor that millions of diabetics use to control their blood glucose levels. Other applications include gas sensors such as CO and CO2 sensors, water quality (conductivity, pH, etc.) sensors, alcohol sensors for motor oil degradation and even sensors to detect explosives.

Most of the applications for electrochemical sensors are portable and battery powered. While a home CO sensor is only normally good for 5 to 7 years, it is likely to need a new battery about every six months to a year. To extend battery life, manufacturers use the latest low-power devices, which draw minimal current from the battery. Maxim Integrated’s nanoPower technology™ was developed with the singular focus of minimizing quiescent current. Any part where the current consumption is less than one microamp in standby or active mode is considered a nanoPower device. Examples of nanoPower products include voltage regulators, operational amplifiers, supervisors, real-time clocks, and microcontrollers.

Since many electrochemical sensors require a fixed bias to operate correctly, they place an extra burden on battery life. In this design solution, we will present a novel architecture that almost doubles the battery life by substantially reducing both the standby current and the average current in active mode. We will use a SPEC electrochemical ethanol sensor to illustrate this architecture (Figure 1). 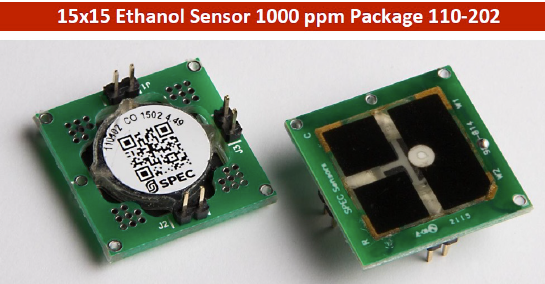 The ethanol sensor featured in this design solution is an amperometric gas sensor, which generates a current proportional to the volumetric fraction of the gas. It is a three-electrode device where the ethanol is measured at the working (or sensing) electrode (WE). The counter electrode (CE) completes the circuit, while the reference electrode (RE) provides a stable electrochemical potential in the electrolyte, which is not exposed to the ethanol. In the case of the SPEC sensor, a +600mV bias voltage is applied to RE.

Figure 2 shows a traditional architecture to bias the sensor and measure the concentration of ethanol in a battery-powered sensor system. While the sensor can operate all the way down to 0.9V, the signal conditioning and the MCU require 1.8V. This voltage is generated from a boost converter like the nanoPower MAX1722x family. In such a system, the MCU, with its integrated ADC, is only active to make measurements, but the boost converter and the signal conditioning (op amp) circuitry are always on since they are used to generate the bias potential required at RE.

With Maxim Integrated's MAX40108 1V op amp, it is possible to power the signal conditioning directly from the battery as seen in Figure 3.

Since the sensor and the signal chain are always active, powering them directly from the battery reduces the output current of the nanoPower boost and thus, the current requirements of the entire system. The MCU will still be powered by the boost regulator, but it is only active to make measurements. Otherwise, it is mostly in standby. Figure 4 shows the detailed circuit block diagram.

As mentioned above, the traditional sensor circuit consumes 150.8µA of standby current and 164.4µA of average current. Replacing the signal conditioning circuit with the MAX40108 reduces the standby current down to 81.9µA, a reduction of 45% and the average current down to 95.7µA, a reduction of 41.79%. As a result, the battery life of the system using the MAX40108 1V op amp is almost double that of the traditional system. Table 1 summarizes the lab results.

While the 0.1% is a very realistic duty cycle as mentioned above, it is worth mentioning that even at higher duty cycles, the battery savings are still substantial. For example, even if the entire circuit is active and transmitting for 200ms every 20s (1% duty cycle), the 1V signal chain would provide almost 25% savings over the 1.8V legacy op amp.

Electrochemical sensors, like the ethanol sensor in this design solution, require a constant bias voltage to operate. This requirement means that the system can never go to full standby or sleep and will always draw current. However, by using a 1V signal chain instead of the traditional low-voltage 1.8V signal chain, battery life can be extended substantially, to almost double.