From the production floor to autonomous drones, robots are all around us, utilizing fast, high-resolution, smaller motors. This fast-spinning, mini motor requires miniature encoders and miniaturized IC package sizes.

All these design specifications seem to be mutually exclusive; for instance, faster signal encoder conversions usually compromise the resolution. This system design is challenging for designers as the swiftly spinning motors continually require complementary sampling speeds. The essential tasks robots perform are movement and sensing, and having analog-to-digital converters (ADCs) in the encoder with high-resolution and fast conversion rates is at the heart of its function. 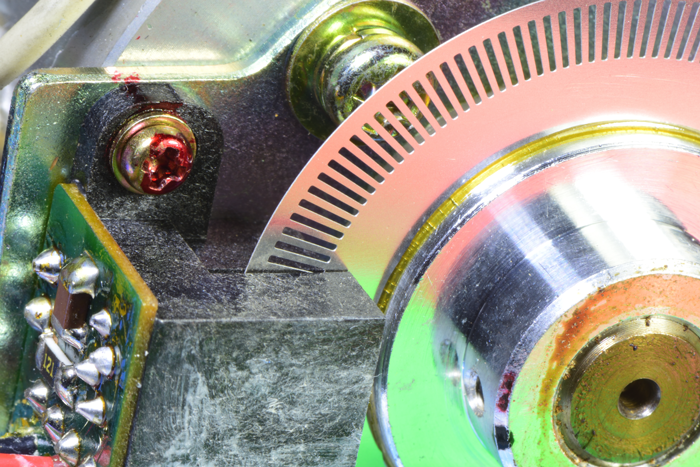 An incremental encoder is an electromechanical motion detector. It has two output signals, A and B, which indicate the direction of movement and distance traveled. Together, these signals determine direction and velocity. The third signal from the encoder determines the motor’s position.

The two types of incremental encoders are linear and rotary. Linear encoders move items in a single dimension or direction and convert linear positions into electronic signals. Rotary encoders move items around an axis and convert the rotary positions or angles into electronic signals. Each output signal corresponds to a constant angle change of the shaft. Motors often use incremental rotary encoders to perform direction, velocity, and position tracking (Figure 2). 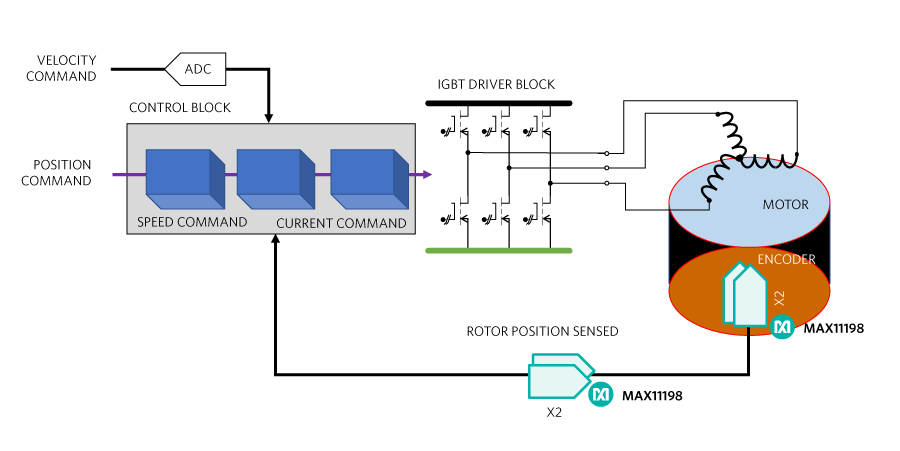 Figure 2. A motor effectively utilizes a rotary encoder, that quantifies the motor’s direction, velocity, and position.

An optical digital encoder transmits light through the slots of the motor wheel. The optical receiver registers a high digital output when the light appears and low digital out in the darkness (Figure 3).

Figure 3. Optical digital encoder showing Channel A and Channel B, where Channel B duplicates the Channel A signal chain.

On the other side of the motor wheel, a photodiode (Figure 3) and a transimpedance amplifier sense the digital light pulse. The transimpedance amplifier’s interface complements the photodiode with low input 0.5pA input bias currents and low 5nV/√Hz @ 1kHz noise. Signals in channel A and B go through their respective comparators to the microcontroller, that captures the final digital events. The key to the Channel A and B arrangement is that the microcontroller simultaneously latches these two signals.

It is important to create a stable TIA circuit in Figure 3 to eliminate uncertainty. The feedback resistor (RF) and feedback capacitor (CF) interacts with the amplifiers input capacitance (CDifferential + Common-Mode = CAMP) and the photodiode parasitic capacitance (CPD). The most efficient TIA circuit is one with a 65° phase margin, Butterworth response. This phase margin magnitude produces a 5% step response overshoot. Equation 1 shows the TIA calculation that emulates a Butterworth response.

where fGBW is the gain-bandwidth-product of the unity gain stable amplifier and CRF is the parasitic RF capacitance.

In Figure 3, the two optical channels, A and B, collect the motor’s direction and velocity data. To measure the direction, the location of the optics and the distance between each optical wheel window establishes a 90-degree phase between the A and B square waves. The motor direction relates to the sign of the phase angle. The phase difference is positive if the rising edge of the A channel precedes the rising edge of the B channel (Figure 4.a). 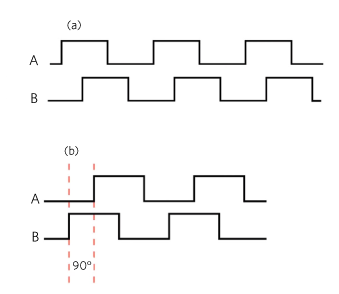 Figure 4. The encoder simultaneously captures the digital Channel A and Channel B signals.

The frequency of either A or B square waves determines the motor speed.

This type of encoder has three signals: Sine, Cosine, and a reference pulse (Figure 5).

Figure 5. Sinusoidal signals comprising of sine and cosine waves where the encoder performs simultaneous samples of both signals.

The analog sinusoidal encoder requires an all-analog signal chain. The extraction of reliable position and speed information from the sinusoidal encoder signals has a certain amount of analog signal pre-conditioning. At the first input of the ADC there is the conversion of SIN and COS signals (typically 1Vpp input signal range) to a differential signal. The differential signal ensures maximum noise immunity and offers the opportunity to appropriately amplify and level shift the resultant single-ended SIN and COS signals in preparation for Analog to Digital Converter (ADC) input stage.

For this example, the signal-chain solution bandwidth is at least 1600kHz. This closed-loop control system requires an extremely low zero latency, which a dual simultaneously sampling ADC provides. The encoder output is 1 VP-P (typical), with differential sine and cosine output signals.

The analog signal-chain requirements are: 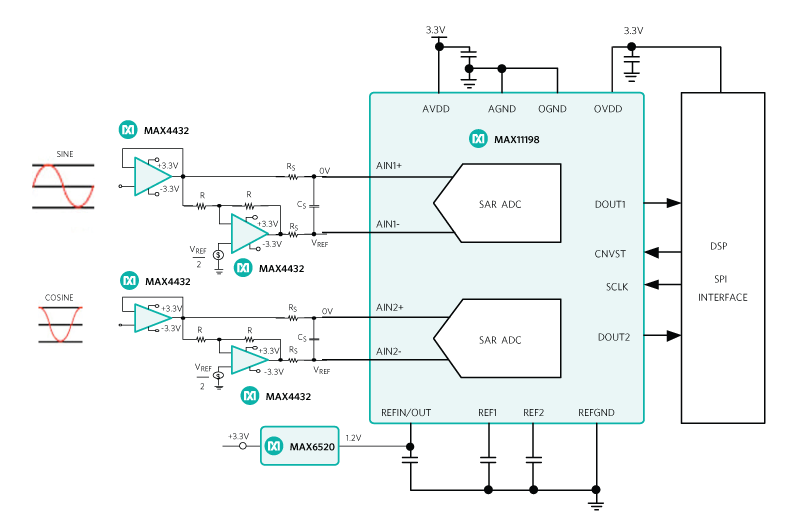 In this example, 2mm x 3mm TDFN MAX11198 is a 16-bit ADC and the sinusoidal incremental rotary encoder has 4,096 periods in one revolution. The calculation for the total number of measurement steps is (Equation 3):

There are two typical implementations of encoders in a motor-control feedback path: linear and rotary. We evaluated the output signal characteristics of the incremental digital and sinusoidal outputs from the analog signal-chain perspective, ensuring signal integrity and optimum performance.

A similar version of this design solution originally appeared in All About Circuits on August 11, 2020.