We live our lives in a wireless world, from our short-range radio toys to our garage door openers, which become our own personal Internet of Things, encircling our entire home. These radio tools and toys connect our lives through short-range wireless transmitters and receivers. Each of these applications presents challenges for radio designers to overcome, from maximizing connection distances to grappling with the WiFi or Bluetooth® regulatory jungle (Figure 1). 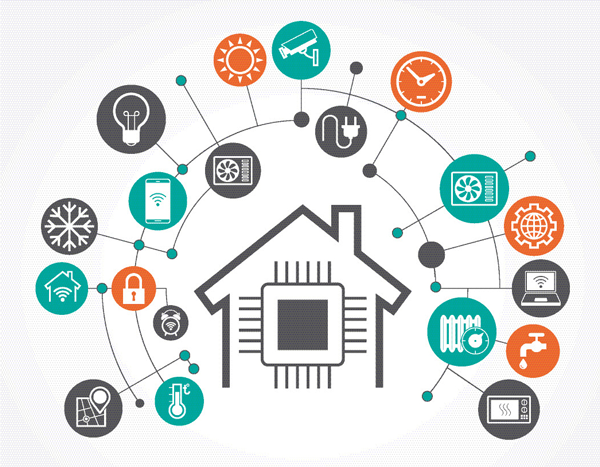 Figure 1. A wireless home or building system becomes a radio jungle when communicating with all functions.

The license-free UHF sub-GHz short-range-device (SRD) is a vital part of these wireless household links. To keep in step with the neighborhood, the number of SRDs around homes are quickly multiplying. However, SRD home systems encounter several challenges related to the communications range, such as proper accounting for the flat-ground/multipath transmission phenomena, transmitter power, and receiver sensitivity.

Short-range radio devices can be unidirectional or bidirectional radio transmitters. The frequency band of SRD transmitters and receivers are commonly in the sub-GHz range, below those for competing wireless regulated technologies, such as Wi-Fi (900MHz, 2.4GHz, 5.9GHz, and others) and Bluetooth (2.4GHz to 2.4835GHz).

The term SRD applies to low-power, sub-GHz radio devices designed to operate across reasonable distances of 100 meters. A simple SRD system, such as a garage door opener, consists of a transmit-to-receive single channel with intelligence and power supplies on both sides (Figure 2). 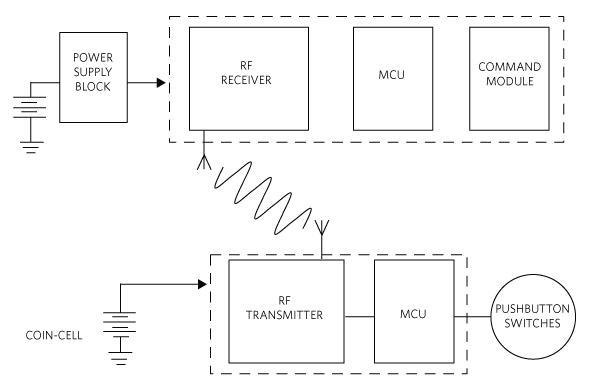 In Figure 2, the communication between the transmitter and the receiver carries information from a simple button or switch. The bottom portion of Figure 2 shows an SRD transmitter block that has a radio frequency (RF) transmitter, microcontroller, pushbuttons or switches, and a coin-cell battery. The top portion of Figure 2 shows the SRD’s receiver block that has an RF receiver, microcontroller with a command module, and a power-supply block.

In the system shown in Figure 2, the transmitter block (bottom portion) is battery-powered, requiring low-power components to support the longevity of the coin-cell battery, while still allowing the RF transmitter to send a signal strong enough to maintain a link over the required distance. 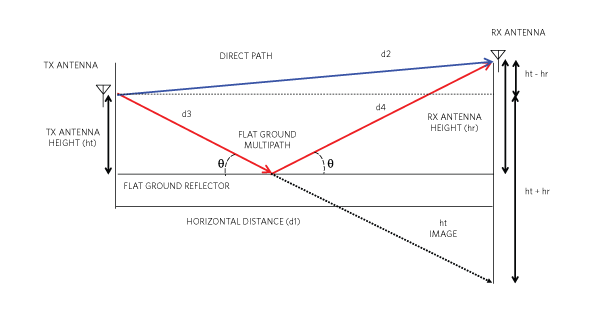 Equations 1 and 2, the Friis calculation, assist in determining the direct-path transmission margin.

Equation 1 calculates the signal transmission power. Notice that the power at the receiver drops by a factor of 1/d22.

Using a 434MHz signal over a 100m transmission path, the transmitter-to-receiver path attenuation is -62dB.

A secondary signal path is generated through the flat ground multipath or ground-reflected route. This distance is equal to d3 + d4 and, in addition to the small change in phase from the extra distance, the ground reflection causes a 180° phase reversal. Losses from the multipath signal further degrade the overall transmission power of the signal seen by the receiver.

Improvements in the SRD communication range can be realized by making changes to the transmitter and receiver as well as making refinements to the antenna design. Signal attenuation occurs through faulty hardware connections, ill-designed antennas, the direct-path channel, or obstructions from physical structures. Figure 4 illustrates a complete 433.92MHz link budget for a 100m transmission channel. 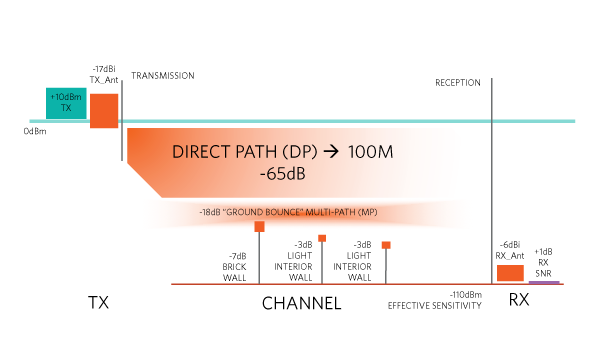 Starting with the transmitter in Figure 4, the transmitter’s power amplifier has an output of +10dBm. The signal then travels through an antenna (TX Ant) that causes a signal attenuation of -17dBi. The signal travels across the channel with two routes, the direct path (DP) signal that accounts for 65dB of attenuation and the multipath (MP) route, which causes an additional 18dB of attenuation. Physical obstructions take another 13dB of power from the signal. Upon arrival at the receiver block, the RX antenna (RX Ant) causes a 6dB loss resulting in a total received signal strength of -109dBm. When using a receiver with a specified sensitivity level of -110dBm, this system configuration only provides 1dB of margin (RX_SNR) when attempting to decode the transmitted signal. In this example, the TX_Ant and RX_Ant values include connection filtering, losses, and impedance-matching errors.

The received signal strength (RSS) can be calculated by subtracting the loss due to each element from the original transmitted power (Equation 3).

The difference between the calculated RSS and the effective sensitivity of the receiver is the margin or RX_SNR.

The often overlooked variables in this calculation are the flat-ground multipath and physical obstructions such as brick walls and interior walls. In the previous discussion, there is accommodation for both the flat-ground multipath and physical obstructions. Looking at Figure 4, what remains of the transmitted signal is a very small amount of RSS, which is prone to noise interference.

From a theoretical perspective, the Link Budget spreadsheet and its related application note, “Radio Link-Budget Calculations for ISM-RF Products,” are good starting points for learning about and calculating the SDR channel evaluation. As a radio system designer will find, this SRD system budget calculator helps determine several useful trade-offs such as receiver sensitivity versus estimated range.

Tricks of the Trade

The MAX4146x family of devices is a high-output-power, low-current transmitter with up to +16dBm of transmitted power while running on a 3V coin-cell battery. This is achieved while keeping the supply current below 12mA in ASK modulation (434MHz, 3.0V) and below 12mA for FSK modulation (434MHz, 3.0V), which has little to no impact on the power budget. The devices provide over +16dBm output power with a high power match or by using “boost mode” with current typically below 45mA.

These transmitters allow more than 30m of extra range without any penalty for battery-powered systems. By using optimized high-power matching and/or boost mode operation, as much as 60m of additional range can be realized.

Better antennas: A better antenna design typically involves enlargement of the physical antenna size. Common SRD operating frequencies are 315MHz, 434MHz, or 868MHz/915MHz. For these frequencies, the ideal length of the antenna should be a ¼ -wavelength antenna equating to 23.8cm, 17.9cm, or 8.6cm/8.2cm, inclusive. For small-form-factor, battery-powered transmitters, none of these lengths are visually appealing or practical, so the design ends up with a transmitter antenna that is smaller than ideal yet “good enough.”

On the receiver side, it is possible to find room for the larger antenna size. Again, for an omnidirectional,¼ λ monopole antenna (PCB trace loop or bent-monopole), there is potential for signal gain rather than attenuation. Changes to the receiver antenna can improve the signal power in Figure 4 from -6dbi to +1dBi or more.

Better RX Sensitivity: Improvements to receiver sensitivity act as a direct improvement to the SNR or link margin of the system. A change in the RX sensitivity from -110dBm to -115dBm directly provides an additional 5dB of SNR. The tradeoff for this improved sensitivity typically comes at the expense of increased power-supply current. More sensitive SRD receivers usually impact the cost of the solution as well. 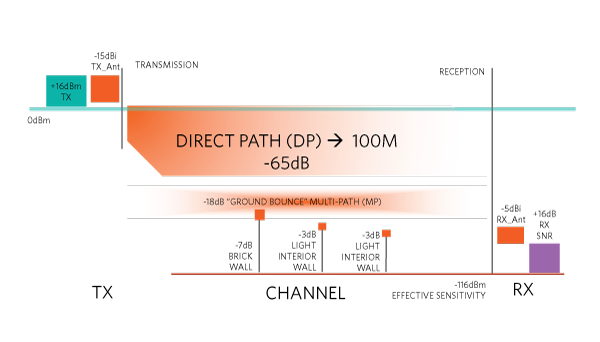 The difference between Figure 4 and Figure 5 is the use of a +16dBm versus +10dBm transmitter, which not only provides an improvement in TX_Ant attenuation from -17dBi to -15dBi , but an improvement in RX_Ant from -6dBi to -5dBi and an improved receiver sensitivity from -110dBm to -116dBm. All these improvements increase the SNR from +1dB to +16dB.

SRDs appear in a large variety of applications that need short-distance and low-power data transmission channels. In many instances, the existing standards such as Wi-Fi or Zigbee are not appropriate primarily because of supply current requirements. These design constraints open the way for use of SRDs. This design solution presents the challenges of making the right SRD IC choices and provides tips for maximizing transmission ranges using a high-gain, low-power RF transmitter.