LEDs have many automotive applications and are used in diverse arrangements from a single LED lamp to LED strings and matrices. Functions like high beam, low beam, fog lights, and daytime running lights (DRLs) can all be implemented with LEDs (Figure 1). Powered from a car battery, the input voltage of LEDs is typically 12V but can be as high as 16V on a fully charged battery. Vehicles employing start/stop technology experience large voltage dips when the engine starts, so the lower limit for the power source can be well below the typical 12V and can often be as low as 5V.

The switching regulators that power LEDs must have high efficiency, operate over the entire input voltage range provided by the automobile battery and must survive 60V ‘dump’ voltage transients. At the output of the voltage regulator, there may be a switched string of diodes that can be fully engaged with 12 LED diodes (42V) or dimmed down to a single LED diode (3.5V). Accordingly, the voltage regulator’s input voltage may vary from 5V to 60V while the output voltage may go from 3.5V to 42V and be above or below the input at any given time.

This design solution reviews the challenges of efficiently powering switched LED strings from a car battery and proposes a novel buck-boost, average current control solution that overcomes these challenges. 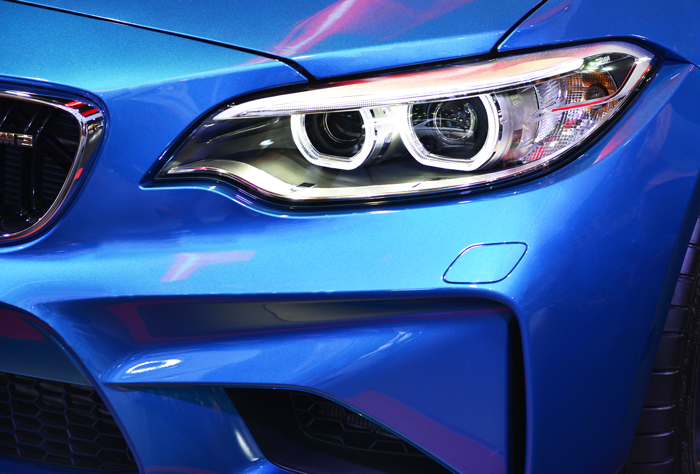 Typical headlight systems utilize a boost converter as a front-end to manage the variabilities of the input voltage. The boost converter delivers a well-regulated and sufficiently high output voltage (Figure 2). Dedicated buck converters, working from this stable input supply, control the lamp’s intensity and position. Each buck converter controls a single function such as high beam, low beam, fog lights, daytime running lights (DRLs), or light position, etc. The matrix manager switches the string diodes in or out, with each buck converter output adjusted accordingly. 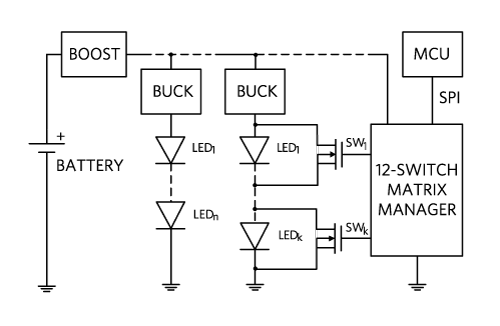 The drawback of this configuration is that each buck regulator works with a boosted input voltage well above the battery voltage even when its output voltage is low. This is the worst-case scenario for the power train switching losses and duty cycle.

Ideally, a customized buck-boost solution is needed for each string, where the string voltage is derived from the car battery with a step-down conversion when possible (buck mode) and a step-up conversion when necessary. With an input voltage as low as possible the system switcihng losses are reduced and the efficiency is improved. Another concern is current and voltage accuracy. The typical peak or valley current-mode buck converter controls the inductor peak current. However, the diode string current is the average current in the inductor. This peak-to-average current error is eventually eliminated by the outer voltage control loop but returns during transient conditions. For example, in Figure 2, the matrix manager may instantly raise the number of powered-up diodes from eight to twelve. The resulting output voltage step produces a current and voltage fluctuation at the output of the buck converter that takes tens of microseconds to extinguish. A high-ratio PWM dimming circuit will sample this current for only a few initial microseconds where the amplitude is dipping, which results in incorrect dimming brightness and color. A control loop that measures average current, as opposed to peak current, would naturally eliminate this problem.

An ideal solution should meet the requirements of smooth buck-boost operation and fast transient response. The LED controller shown in Figure 3 enables such a solution. 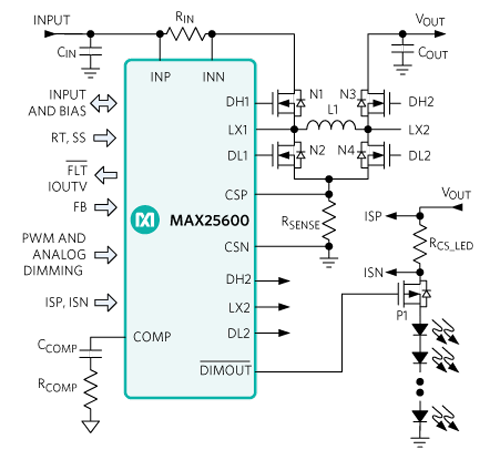 The critical aspect of this architecture is the smooth transition from one mode of operation to the other, when the regulator input and the output voltages are close in value.

In the transition from buck to buck-boost operation, as the input drops closer to the output, the converter’s duty cycle approaches unity. Namely, the ‘on’ time of N1 gets longer, while the ‘on’ time of N2 gets shorter. At some point, the N2 power transistor may not turn on fast enough within its allowed ‘on’ time, leading to discontinuities in the output voltage and current. Even if N1 and N2 were fast enough, the transistors N3 and N4 are in the ‘off’ state during buck mode and, when called to duty, have a turn-on delay due to the respective charge pumps (not shown), which require time to get back into operation. 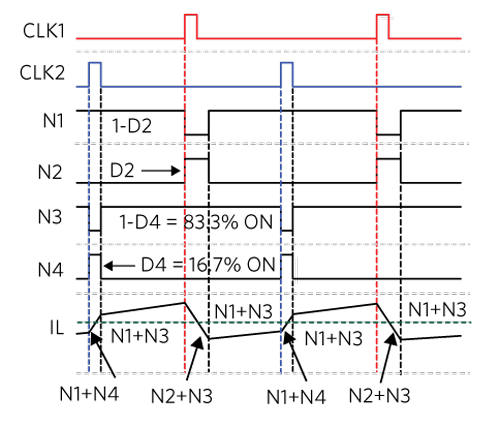 Figure 4. From buck to buck-boost operation.

Accordingly, as the buck DC approaches 85%, the two boost transistors (N3 and N4) kick into action. Looking at the current waveform, we see that by equalizing volt x seconds, we have:

By reordering and simplifying, we obtain the characteristic equation of the four-switch buck-boost converter:

By eliminating the boost converter in Figure 2 and utilizing a buck-boost converter for each LED string, the voltage-regulator input voltage is now reduced to the battery voltage, minimizing each regulator’s switching losses.

Here, the pulse tpw (Figure 6), between the turn-off of N1 and the time RSENSE x IL hits Vε is measured, and a delay equal to tpw is introduced before the turn-on of N1 by the pulse doubler. Hence, the error voltage, Vε, comes to represent exactly the average current Iav. 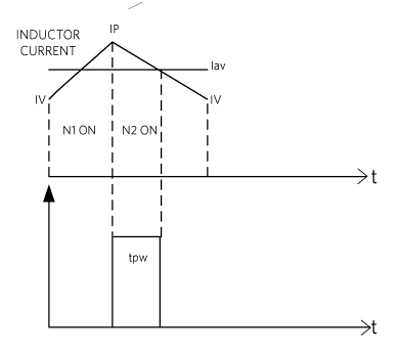 The IC controls LED string voltages from 0 to 60V and provides both analog and digital PWM dimming. It has built-in analog PWM dimming at a 200Hz dimming frequency. The device allows adjustable 200kHz to 700kHz fixed-frequency operation. In addition, ±6% triangular spread spectrum is internally added to the oscillator to improve EMI performance. A fault flag indicates open LED, shorted LED, or thermal shutdown conditions. The adjustable soft-start feature limits the current peaks and voltage overshoots at startup. It also features robust output, open and short protection and is AEC qualified.

A similar version of this article appeared October 28, 2019 on eeNews.