This application note introduces a novel architecture for powering an electrochemical sensing circuit and explains how the MAX40108 low-power, high-precision op amp with 1.0V supply voltage benefits the system.

An electrochemical sensor is often used in wearable devices for health care, such as blood glucose sensors. It is also used extensively in portable devices to detect various kinds of gases, including ethanol, oxygen, CO, and CO2. Most electrochemical sensor applications powered up by a 1.5V single-cell battery use a potentiostatic circuit to control the potential of electrochemical sensor electrodes. The circuit converts sensing current to voltage, while an analog-to-digital converter (ADC) and microcontroller unit (MCU) process the voltage signal in IoT sensor systems. A Bluetooth® module is also included to transfer information from the MCU to a phone or other device (Figure 1). The power consumption is a critical specification in this kind of application. During initial power-up, a charging current occurs through electrodes, taking 30 minutes to 24 hours for the sensor to stabilize. To achieve accuracy, the potentiostatic circuit and electrochemical sensor need to remain ready to use, even when the device is turned off. To save power for the potentiostatic circuit, a 1.0V op amp comes to market as a revolutionary solution to almost double the battery life with the new sensing architecture.

An electrochemical sensor operates by reacting with the gas of interest and generates a current proportional to the gas concentration. The gas is measured at the WE, where the electrons result from an electrochemical reaction flow to or from the WE through an external potentiostatic circuit. The CE works as a current source or voltage supply, supplying current and any voltage needed to drive the WE. During the continuous electrochemical reaction, the WE's potential cannot remain constant itself. The RE must maintain the potential near the WE and supply a reference potential point. No current should flow in or out of the RE. 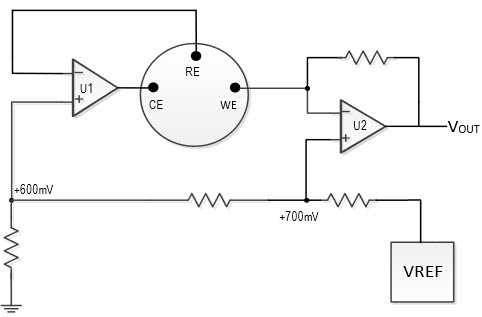 A SPEC® ethanol sensor is used because its recommended bias voltage across WE and RE is +100mV. In Figure 2, the potentiostatic circuit consists of two op amps, U1 and U2. U2 works as a current follower and converts current from WE to voltage. The voltage reference provides +700mV at the noninverting input of U2, making WE hold a potential of +700mV. The current flow from WE comes from CE. U1 works as a current source and voltage supply. The U1 inverting input provides a high-impedance output for RE, allowing no current to flow in or out of RE. As mentioned before, RE needs to measure the potential near WE and supply a reference potential point. RE, together with CE, composes a feedback loop of U1, while the voltage at CE is large enough to supply the current flow from CE to WE. The potential at RE is maintained at a constant level and refers to WE through resistors at the noninverting input of U1; in this case, 100mV.

As shown in Figure 3, a 1.5V single-cell battery provides supply voltage directly to two op amps and skips the 1.8V nanoPower booster, which is different from a traditional design. In comparing the new architecture versus a traditional architecture, a traditional sensor system uses a battery-powered boost regulator to provide supply voltage for all components, including the potentiostatic circuit, MCU, and Bluetooth low energy (BLE) modules. In traditional architecture, the boost regulator and op amps in the potentiostatic circuit are always active, while MCU and BLE modules are in standby mode and only active to take measurement when needed. To save power in the potentiostatic circuit, nanoPower boost regulators, such as the MAX1722x family, can be used. To save power and have high-precision measurement, a low-power op amp with low offset, low bias current, and low power drift are needed for traditional architecture. However, most op amps on the market cannot meet all these requirements at the same time.

To solve this power-saving problem in electrochemical sensor applications, Maxim Integrated® has introduced the revolutionary MAX40108; a low-power, high-precision op amp that works at as low as 0.9V and can be used directly with a 1.5V single-cell battery while maintaining accuracy. The MAX40108 maintains at least a 116dB power-supply rejection ratio (PSRR) over a supply range of 0.9V to 3.6V, which means even when the battery is at the end of its life (usually around 0.9V) the sensor and its potentiostatic circuit can still work. The MAX40108 has an input offset voltage as low as 1µV and a 55pA input bias current. It guarantees to measure small current changes from the electrochemical sensor output and uses as little as 25µA current. Since the MAX40108 is powered directly from a 1.5V battery, as the new architecture shows in Figure 3, the MAX17220 nanoPower boost no longer needs to be active all the time. The MAX17220, MCU, and BLE are on periodically to sample data from the electrochemical sensor output. Even if it consumes more current when the MCU is active, the average current is still low due to the low duty cycle.

A reference design has been built to demonstrate the performance of the MAX40108 in an electrochemical sensing system. Figure 4 is a block diagram of a battery-powered ethanol sensor system using two MAX40108s, the MAX32655 as the MCU, and the MAX17220 as the boost converter. The MAX32655 has an internal BLE module. Manufactured by SPEC, the ethanol sensor remains continuously active; WE and RE are biased at 700mV and 600mV, respectively, with a 100mV voltage across them to keep the sensor on. 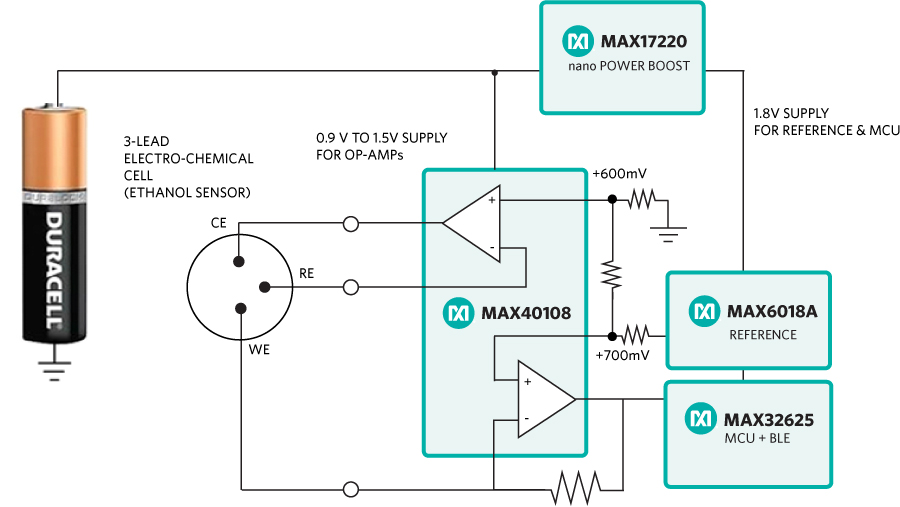 With the MAX40108 powered directly by the battery and the MCU in standby mode, the system’s standby current is only 81.9µA. The traditional structure consumes 150.8µA with a legacy op amp powered by the boost converter. 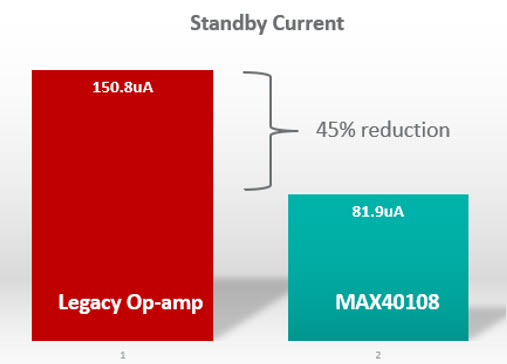 Figure 5. Standby current comparison between a legacy op amp and the MAX40108.

The average current consumption of a system is measured by taking into consideration the MCU’s duty cycle in both standby mode and active mode. For example, Figure 6 shows a timing diagram of system power consumption. The peak current of 14mA is contributed by the MCU from occasionally being active to process data. The current stays at 80µA the rest of time when the time sensing circuit is active and MCU is in standby mode. 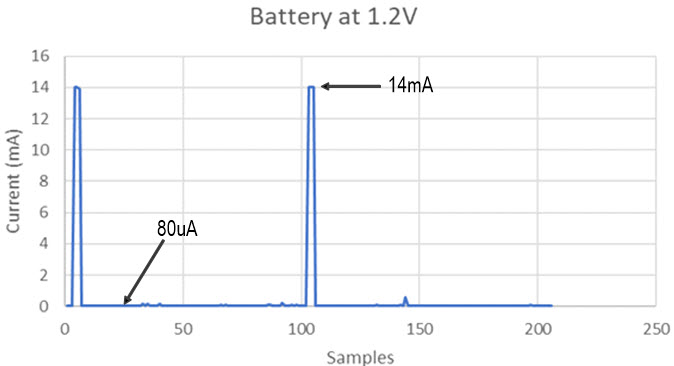 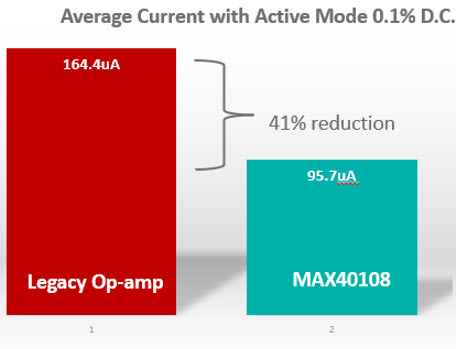 As you can tell, if the MCU is more active, the average current will increase. We did a calculation and found that after reaching a certain duty cycle, current consumption of the system is dominated by the MCU, with each architecture consuming the same power. The relationship of average current vs. the MCU’s duty cycle is shown in Figure 8. The X-axis is the duty cycle; the Y-axis is the battery-saving percentage of the new vs. traditional architecture. The new architecture’s power-saving percentage drops when the duty cycle increases due to the increase of the MCU active current. This is where the duty cycle increases to 3.04%, with each architecture consuming similar power. In real applications, the duty cycle is usually in the range of less than 1% up to 3%. System engineers should consider this specification when choosing their structure.

With the help of the MAX40108 1.0V, low-power, high-precision op amp, designers can use new architecture to power up potentiostatic circuits directly from the battery to save system standby current. This is very useful in biasing always-on sensors such as the electrochemical sensors demonstrated in this article. The MAX40108’s low offset, high PSRR, and low input bias current guarantee a sensor system’s accuracy.