Current limit in a LDO establishes an upper threshold for the current delivered. In a low dropout linear regulator architecture, the input and output average currents, which are connected by a series pass-through transistor, are almost the same.

Why current limit? Any surge in the current demanded by the load and/or triggered by a load fault condition results in an additional input current draw. If the device is not over current limited then this additional current can result in unacceptable system performance like increased load ripple, output voltage going out of regulation and, if not limited, can lead to system failure as well. Hence, there is a need to limit the current against these conditions in the interest of safeguarding the associated electronics within and outside the LDO so that it gracefully handles the fault condition (like output short circuit) and auto-recovers when the fault is removed.

There are multiple ways in which the current limit can be implemented.

The types of current limiting architectures are as follows:

Each of these architectures have their own set of advantages/disadvantages and the choice of one architecture over the other is dependent on the application need, cost, total solution size, and performance.

The MAX38902 are low-noise, linear regulators that deliver up to 500mA of output current with only 10.5µVRMS of output noise from 10Hz to 100kHz. These regulators maintain ±1% output accuracy over a wide input voltage range, requiring only 100mV of input-to-output headroom at full load. Figure 1 shows MAX38902 Dropout Voltage vs. Load Current. Figure 2 shows PSRR vs. Frequency. The key features and performance of MAX38902 LDO are listed in Table 1.

For the reference current limit design in this application note, consider the following operating conditions:

A MAX40009 push-pull, rail-to-rail input comparator is used to limit the current of the MAX38902 LDO. See schematic shown in Figure 3. A DC voltage rail of 4V powers up both the LDO and the comparator supply rails. A fixed reference voltage at noninverting comparator input is formed by the resistor-divider circuit R26 and R27 with its midpoint node tied to noninverting terminal of the comparator. The chosen resistor values of R26 and R27, as shown in Figure 3, set the reference voltage to 3.85V for a 4V input. A series 1Ω resistor senses the voltage drop proportional to the LDO current drawn. Following the resistor, the dropout voltage is fed to the inverting terminal of the comparator. Since the LDO current draw is proportional to the voltage drop across R25 and as the comparator inverting input voltage falls below 3.85V, the comparator output starts to switch high and limits the feedback voltage (FB) of LDO, thereby limiting the current.

Thus, increasing the resistance R27 reduces the current limit at constant input supply voltage and a single resistor can provide the control to have a programmable current limit.

In this example circuit, the current limit is set to ~170mA, ±15% based on tolerance stack up of resistors and comparator internal voltage transition threshold accuracy, Input Voltage DC variation/loading. For tighter tolerance, it is encouraged to use 1% tolerance resistors. 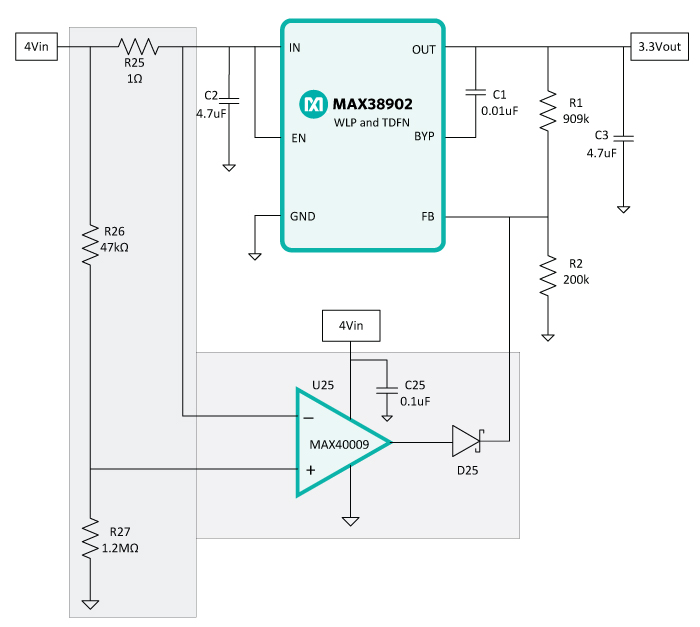 Figure 3. Schematic-added circuit block in gray. (R27 can be replaced by fixed zener with 1% or better tolerance).

Circuit Analysis in the Lab

The circuit behavior is explained with multiple waveforms for each operating corner.

Figure 4 shows the circuit operating in normal operation without any current limit where Figure 4(a) on the left shows the comparator input and output signal performance with LDO load current.

Note that Figure 4 waveform collectively depicts steady state operation in which the comparator circuit does not limit the LDO output current, i.e., not in current limit.

All waveforms are annotated next to their measurements. Consider zooming-in on the waveforms to see this clarity.

The next waveform capture in Figure 5 collectively depicts the steady state operation in which the comparator-based current limit circuit kicks in and limits the current to 165mA. The operating conditions remain the same as explained earlier. Observe that the voltage toggling of the comparator output on Channel 4 and 3.3Vout on Channel 2 in waveform 5b droops from 3.3V to 1.70V while in current limit.

Next, in Figure 6, a single waveform shows a dynamic plot of circuit entering and exiting current limit accomplished with load resistance drop. 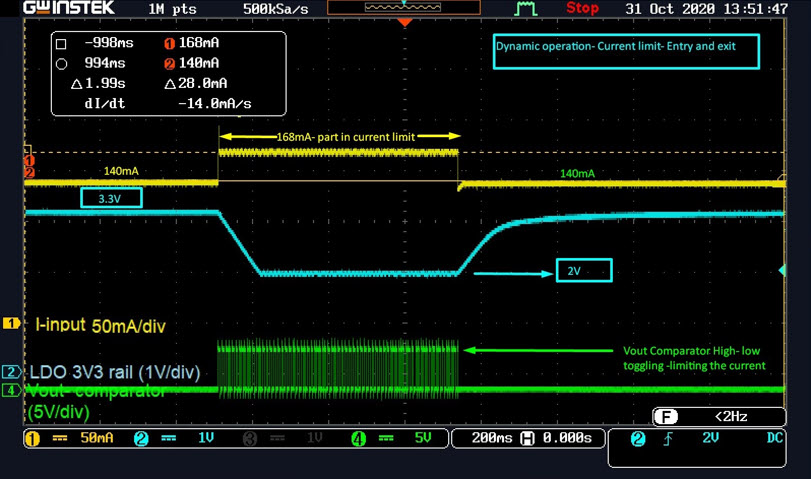 Figure 7 depicts a sudden short circuit on load side while operating in normal operation delivering 3.3V output voltage and current of 140mA. As soon as short circuit is applied, observe that the LDO 3.3V rail drops to 0V on Channel 2. The peak input current seen by system during this condition is 240mA shown on Channel 1. Channel 4 shows that as soon as load short happens the comparator output voltage starts toggling from low to high, indicating that the system immediately enters current limit and after the peak current excursion of 240mApeak, settles to 160mA DC current limit for a persisting output short-circuit condition (observe Channel 1). The peak current seen is dependent on MAX38902 LDO bandwidth and limited by parasitics (trace inductances, cable inductances used in the circuit). 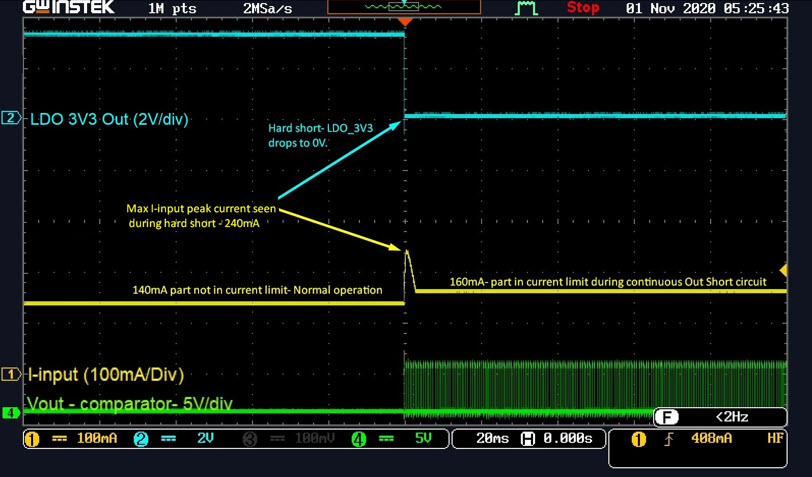 In this application schematic, C1, the bypass capacitance value chosen is 0.01µF, same as used in the MAX38902EVKIT#.

where CBYP is in μF
(This formula flows from the LDO Architecture algorithm and is published in the MAX38902 data sheet in the Bypass (BYP) section under Detailed Description.)

Note that this slew rate applies only at startup. For recovery from a short-circuit per LDO internal bandwidth and architecture occurs at a slew rate approximately 500 times slower. (Refer to the MAX38902 data sheet Bypass (BYP) section under Detailed Description.)

In the waveform shown in Figure 8, a hard short is applied on load side during normal operating condition, however on release of short circuit, notice that the output voltage slew rate on short-circuit recovery is ~0.01V/ms for C1 = 0.01µF and the load current also gradually ramps up. This is an expected architecture behavior of soft-start after a short-circuit fault. Now, consider a case that asserts a load reset (different from a short circuit) and notice that Output Voltage slew rate is faster (as seen in the right portion of the waveform in Figure 8). 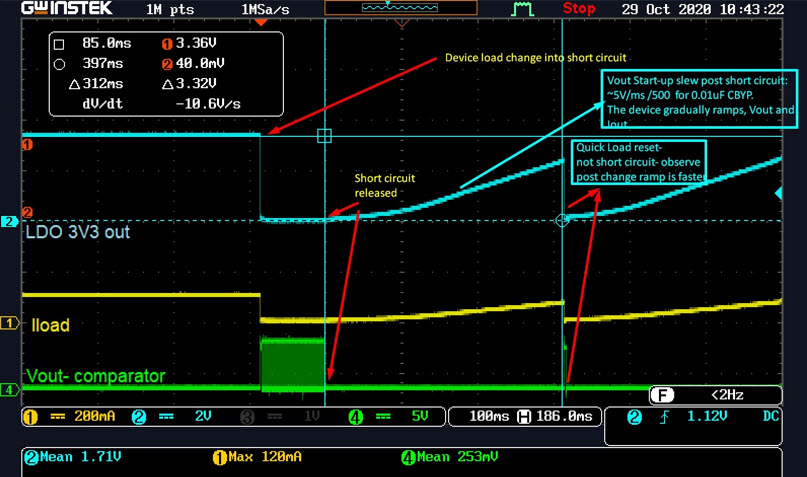 The waveform in Figure 9 shows system startup in short-circuit condition. 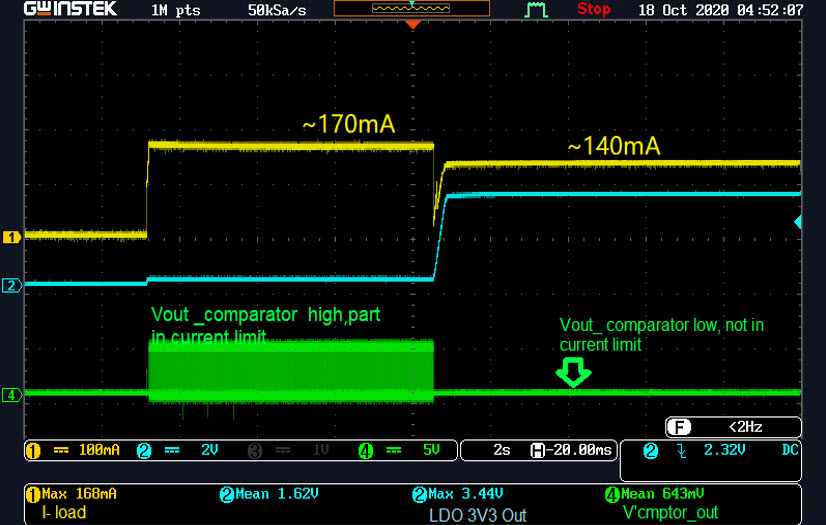 In this application note, an external programmable current limit for LDO is designed and validated. The programmable current limit is needed in scenarios where system load short circuit, overcurrent scenarios due to incorrect load connections happen. In these scenarios, the fault current is limited by the impedance path taken by the current. Some applications such as lighter loads of few 100s of mA or LDOs used as current limit protectors require current limit to be configured to suit their end application. This provides an additional layer of protection and enhances system reliability. Through this application note, it is shown that by changing a single resistor R27, the current limit can be programmed to a desired value and the circuit can be reiterated for variable load current requirements across products. This flexibility greatly benefits designers, end consumers to quickly iterate the same circuit across their products, test, and reduce design to market time.