A high-frequency switching power supply generates electromagnetic interference (EMI) during operations, which interrupts the surrounding equipment. These EMI interferences can be either conducted or radiated in nature. The importance of the EMC in electronic equipment is increasing. More standards are accordingly emerging to limit the radiated interference generated from an electronic device.

The MAX38640–MAX38643 are the nanopower family of ultra-low quiescent current DC-DC buck converters with MOSFETs and control circuit integrated within the chip. This buck converter family operates from the 1.8V to 5.5V input voltage. It supports load currents up to 175mA, 350mA, and 700mA, with peak efficiencies of 96% and over 88% efficiency at 10µA load current. 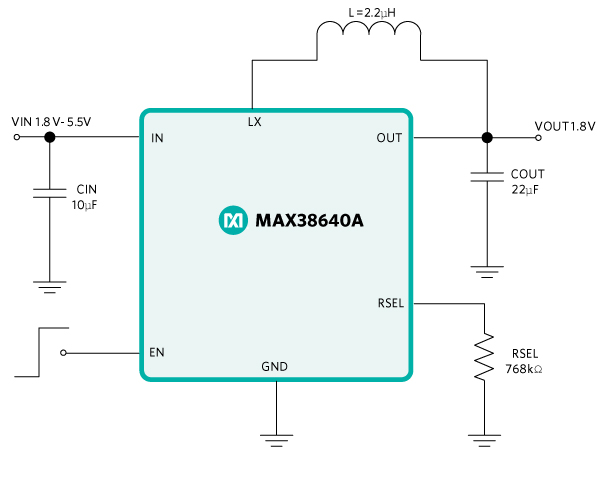 The following are the limits of radiated emission according to the CISPR32 standard for both 3-meter and 10-meter testing.

Figure 3 shows the radiated emission test setup at the laboratory. The EUT is placed on a 360° rotatable test table, which is at a 10m distance from the receiver antenna. The receiver antenna picks the EMI noise signals generating from the EUT (MAX38643) at different heights (1m to 4m). It generates the EMI peak plot from 30MHz to 1GHz frequency in the spectrum analyzer/EMI receiver.

Measurement and Layout Design to Optimize the EMI Emission

The MAX38643AELT+ buck converter was used here. It has a peak inductor current limit of 1A and can support a load current of 700mA in the µDFN package. Figure 4 is the schematic of MAX38643. 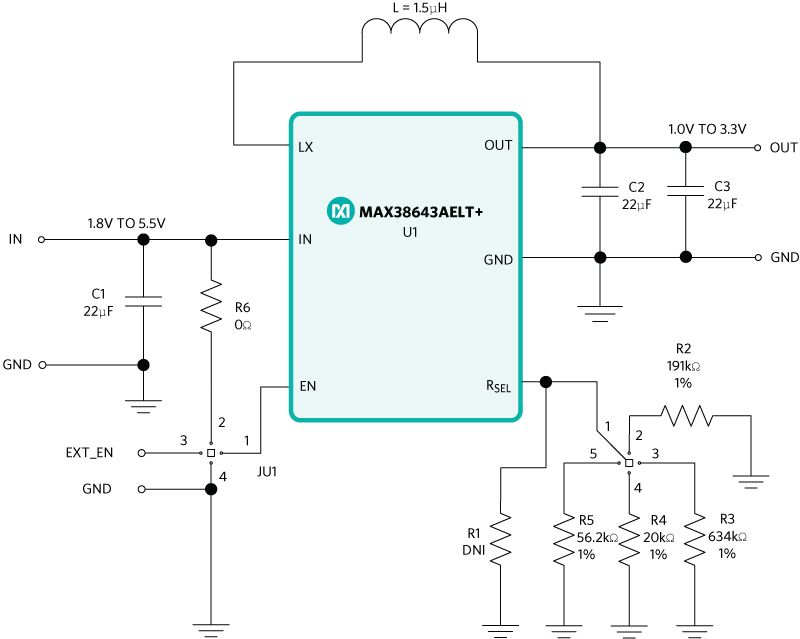 The use case for this study is as follows

The switches, Q1 and Q2, operate alternately in the MAX38643 buck converter. Switch Q1 is ON when Q2 is OFF, and vice versa. The current flows from CIN to the load through the inductor L and the inductor stores the energy when Q1 is ON. The switch Q2 is OFF during this period. Figure 5 shows the current path during this operation in red. The inductor discharges through the load and COUT when Q2 turns ON and Q1 turns OFF. Figure 5 shows the current path in green. The output voltage is the average of the switching voltage appearing across Q2.

The high frequency switching of Q1 and Q2 creates pulsating current with high di/dt and generates high EMI noise. This current path becomes critical for controlling the radiated EMI emission. So, a normal way to minimize the EMI emission is to reduce the area of these switching paths. 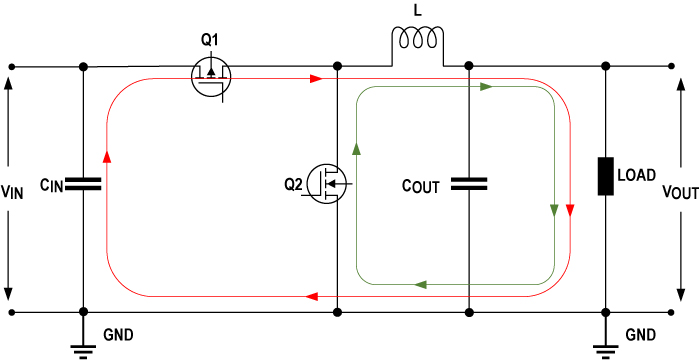 Figure 5. Current paths of the buck converter based on the Q1 and Q2 switching.

Figures 6 and 7 show the board-1 PCB layout of MAX38643 and the EMI emission peak plot. 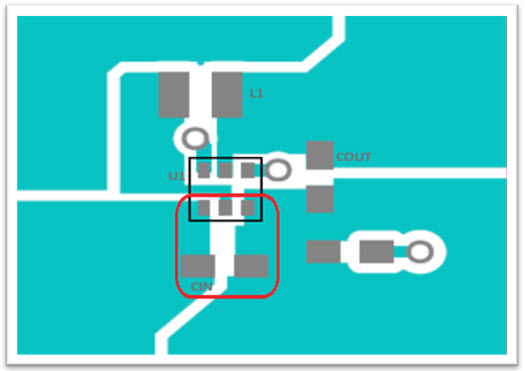 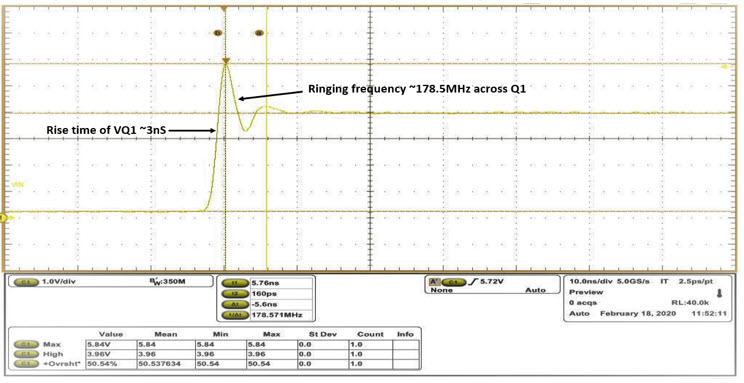 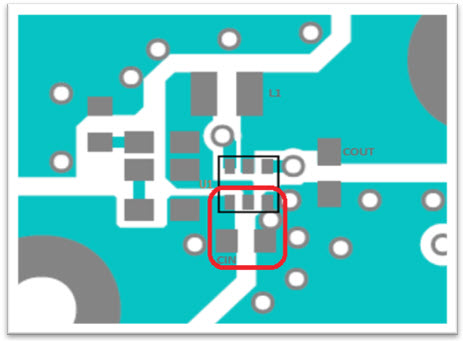 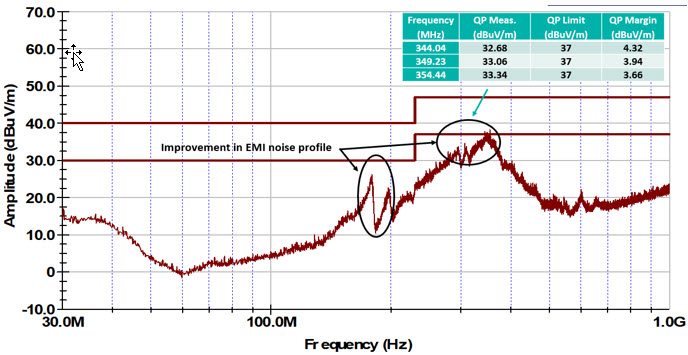 Benefits of the RC Snubber Circuit

The MAX3864x nano-power buck converter family has MOSFETs Q1 and Q2 integrated within the chip. The EMI noise is generated by the high dv/dt, di/dt in the circuit, which in turn causes the ringing in the voltage across Q1 and Q2 during high frequency switching. The analysis of Figure 5 shows the parasitic inductance is more from the CIN to Q1 drain terminal due to the trace on the PCB, and less from the Q1 source terminal to Q2 drain terminal as both Q1 and Q2 are inside the chip. Hence, the ringing voltage across Q1 is more than Q2. Figures 11a and 11b are the voltage waveforms across Q1 and Q2 in the board-2 PCB layout.

A RC snubber is applied across Q1 to reduce the radiated EMI noise as the ringing is high across Q1 (Figure 12). 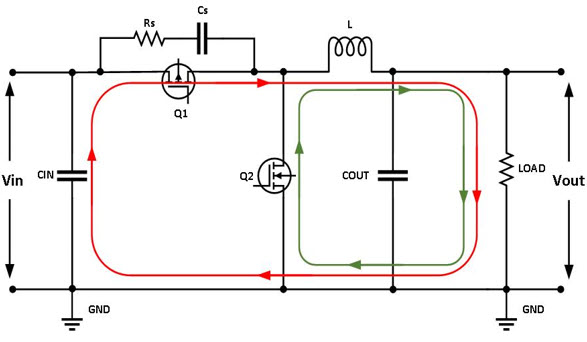 Calculation of the RC Snubber

Let us calculate the parasitic inductance and capacitance in the circuit which leads to the radiated EMI emission. The waveform in Figure 13 shows the voltage across Q1 during the OFF condition in the board-2 PCB layout. 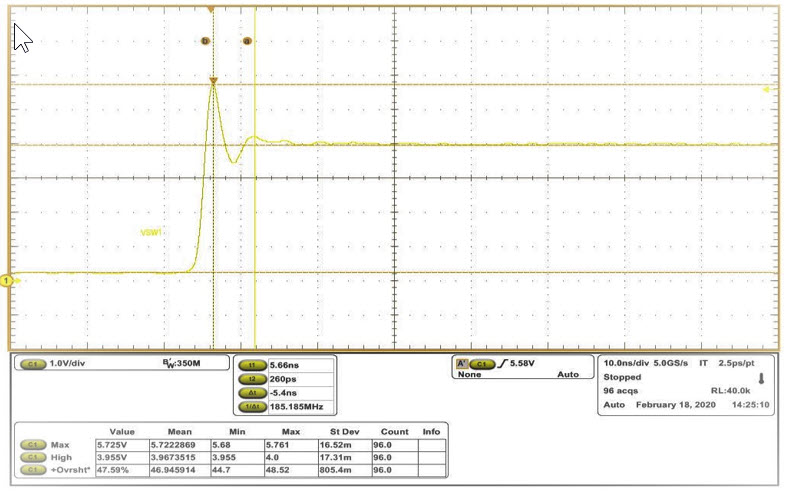 The frequency of the ringing decreases from 185.1MHz to 94.3MHz by adding the capacitance of 820pF across Q1. Figure 14 shows the voltage waveform across Q1. 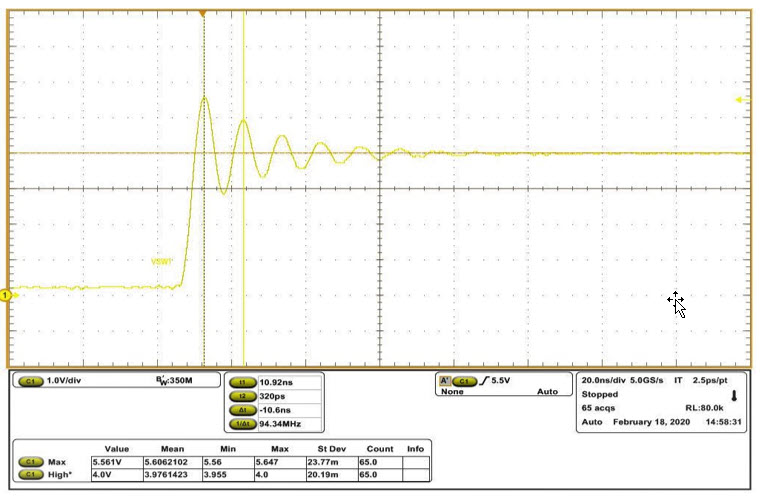 The parasitic capacitance can now be calculated by below equation 1

The parasitic inductance is calculated as

The snubber resistor is now calculated as:

Figure 15 shows the waveform when the 4.7Ω, 820pF snubber values are connected across Q1. The ringing voltage reduces to 4.68V peak. The rise time of VQ1 increases from 3nS to 3.2nS. 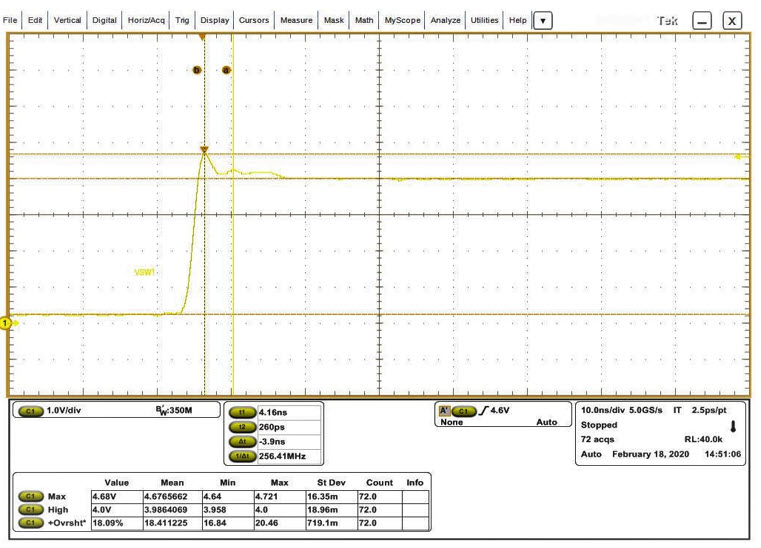 Optimizing the RC Snubber for Efficiency 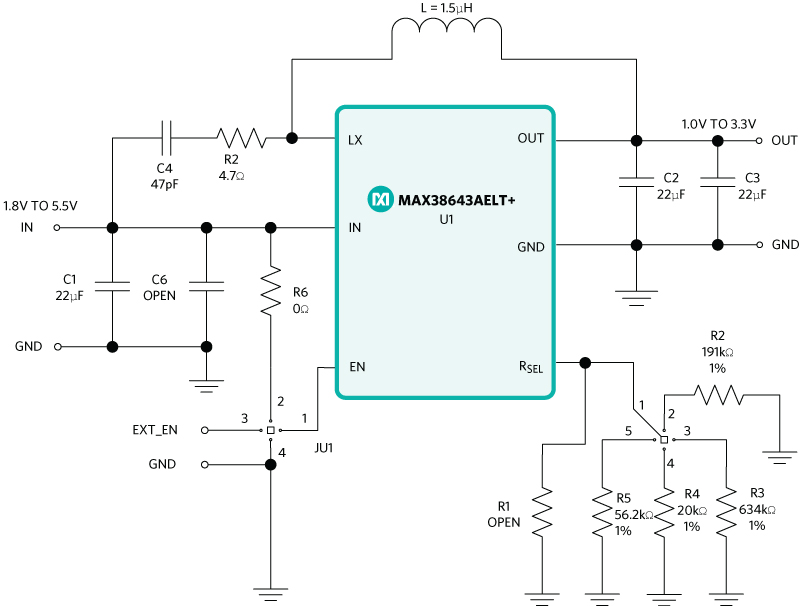 Effect of the RC Snubber on EMI Emission

The effects of different RC snubbers on the efficiency and ringing voltage across Q1 is already demonstrated. The snubber values of 4.7Ω and 47pF were selected to create less loss and achieve high efficiency in the converter, and to keep the noise level much below the Class B limit. Figures 17 and 18 show the Q1 voltage waveform, and EMI emission with a 4.7Ω and 47pF snubber across Q1. 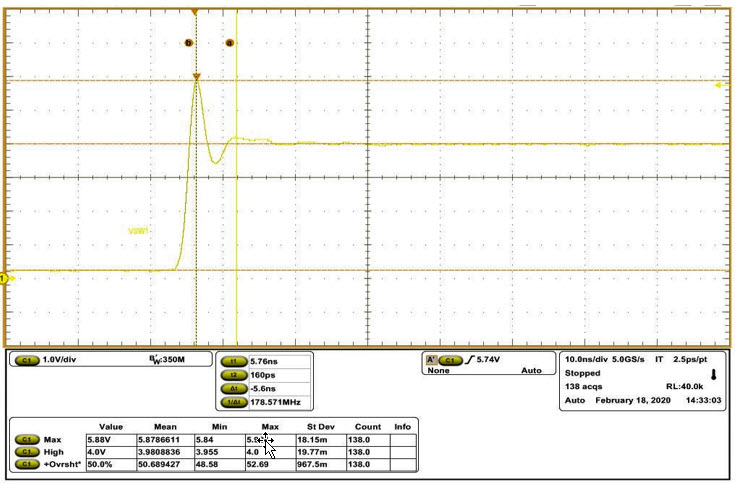 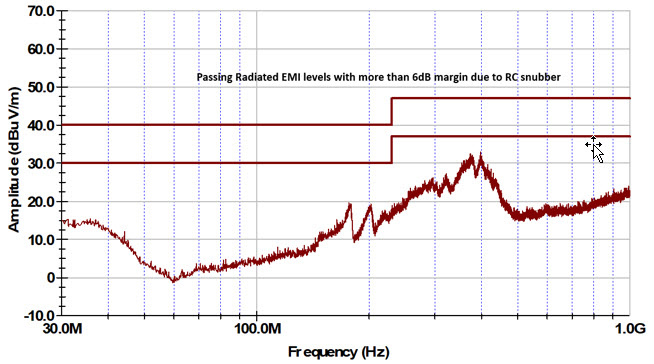 The selected snubber values achieved more than a 6dBµV/m margin from the CISPR32 standard (Figure 18). 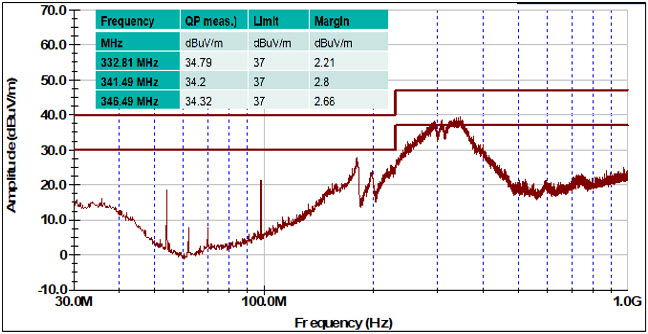 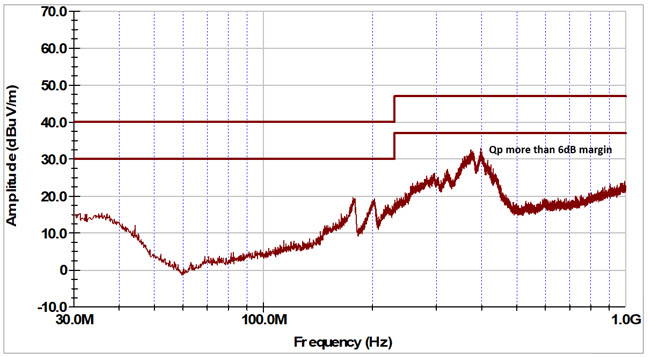 This application note first measures the radiated EMI emission of the MAX38643 EV kit in a 10-meter chamber. The test result passes the CISPR32 Class B limit with very less margin. The EMI emission improves with the improvements in the PCB layout. A proper RC snubber to reduce the noise helps pass the CISPR32 Class B limit with more than a 6dB margin without compromising the efficiency in the MAX38643 buck converter.