This application note provides a solution for understanding and design of ATE testers with complex functionality by describing major blocks of pin electronics (PE) devices and depicting different tester architectures.

Automated test equipment (ATE) is a testing apparatus designed to perform a single test or sequence of tests on one or multiple devices at a time. Different types of ATE testers include testing of electronics, hardware, and semiconductor devices, which are supported by Maxim's ATE portfolio of highly integrated pin electronics (PE) devices. These PE devices can deliver signals and power with precise voltages and currents. It can also measure the device under test (DUT) electrical characteristics. This application note describes the major blocks of complex PE devices and depicts different tester architectures, thereby easing the design of ATE testers.

Signals driven from the DCL check DUT functionality over various voltage levels and frequencies by incorporating configurable load conditions. Traditionally, AC characteristics of a device are tested with the DCL block of the tester. 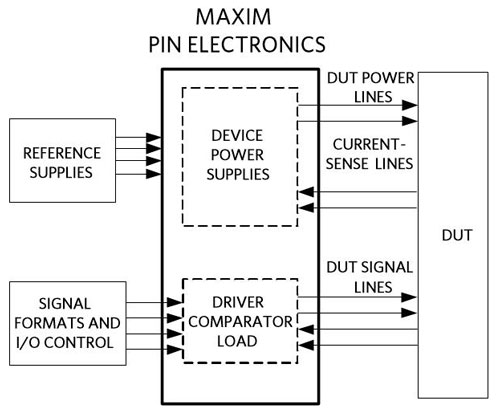 Tester speed and power consumption are the critical parameters for ATE products. Maxim's PE drivers can operate at high speed without compromising signal fidelity and offer low power consumption, even at higher frequencies. This is achieved by implementing the PE design in an advanced BiCMOS semiconductor fabrication process. For example, the MAX9979 has a high-speed driver that supports a data rate of 1.1Gbps at 1VP-P with a low power dissipation of 1.2W/channel.

The driver is responsible for switching the device at different voltage levels. Voltage levels in any device are either programmable or set through analog inputs. PE ICs with integrated level-setting DACs support programming different voltage levels through a serial interface. PE ICs without integrated DACs set the voltage levels through analog inputs. External DACs, FPGAs, and power supplies are used in addition to the driver block to configure and provide the analog inputs. Peak-to-peak output voltage determines the maximum data rate at which the PE driver can be operated. The maximum data rate of the device is calculated by the rise/fall time at a specific output-voltage swing.

The driver acts like a multiplexer switch between three or four different voltage levels. Multiplexer switching is controlled by the high-speed differential inputs DATA/NDATA and RCV/NRCV, single-ended input ENVHHP, and mode-control bits TMSEL and ENVHHS. Refer to the data sheet for control word bits and digital inputs to switch on the driver, then switch between the voltage levels—DHV, DLV, DTV and VHH—as detailed in Table 1.

As seen in Figure 2, additional features of the driver include cable droop compensation, slew-rate control, driver voltage clamps, and adjustable output impedance. Typically, a driver has an output impedance of 50Ω, though some parts in Maxim's ATE portfolio support adjustable driver output impedance. In drivers with the adjustable impedance feature, the driver has a fixed impedance of 48Ω and a programmable impedance of ±2.5Ω (with 360mΩ resolution), which can be adjusted through serial interface bits. This helps to overcome the tolerance of coaxial cables used from the tester to the DUT. A slew-rate circuit adjusts the rise and fall times of the driver output voltage. The driver buffer slew rate can be controlled through the serial interface. 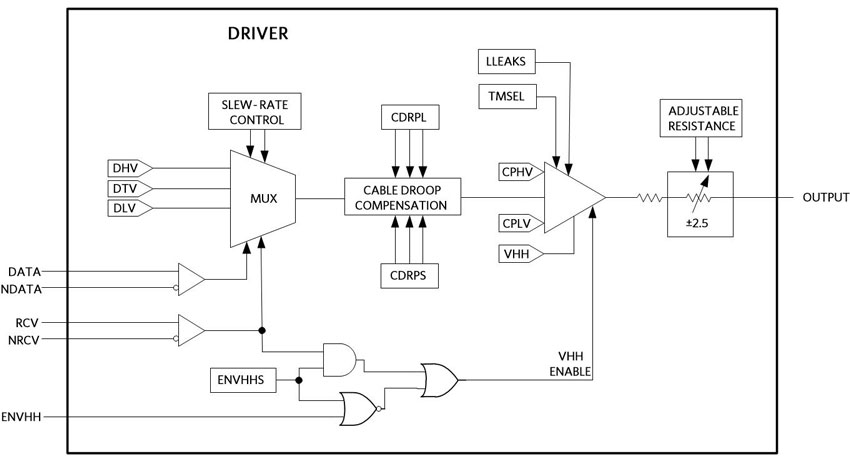 Operating with lossy interconnects degrades the output waveform at the DUT due to the frequency-dependent voltage drop in the transmission line, thus resulting in a highly degraded or unusable signal. Voltage droop can be compensated through the cable droop compensation circuitry. Maxim's PE driver compensation circuit counters this degradation by adding a double time-constant decaying waveform to the nominal output waveform. Figure 3 depicts a comparison between a typical driver and the cable droop compensated driver. To understand more about the performance issues of cables, refer to Maxim's Application Note 4338: Cable-Loss Solutions. 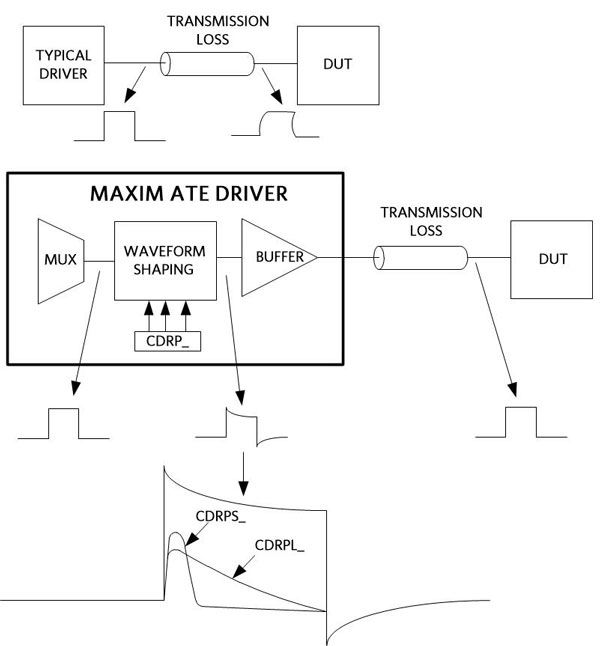 Figure 3. Cable droop compensation in a typical driver vs. a Maxim ATE driver.

The high- and low-voltage clamps limit the voltage at DUT_ and suppress reflections when the channel is configured as a high-impedance receiver. Clamp voltages can be set using the analog inputs/level-setting DACs (CPHV_ and CPLV_). The clamps are enabled only when the driver is in high-impedance mode. For transient suppression, set the clamp voltages to approximately 0.7V outside the minimum and maximum expected DUT output-voltage range. Overvoltage protection then remains active without loading DUT_. Driver clamps are always and only enabled in driver high-impedance mode. 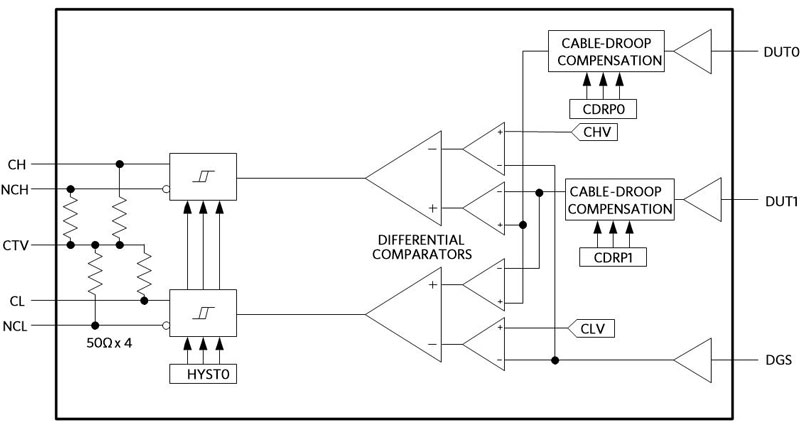 In the process of testing, the devices must test under either loaded or unloaded conditions. The load block helps in functional testing, plus verifying the voltage and current levels at different load conditions. Serial interface bits can be controlled to enable and disable the load in the PE IC. There are two different types of loads in the PE IC—one is a passive load and the other is an active load.

A PE IC with a passive load has two or more resistive load options that connect a "commutation" voltage (VCOM) or, in this case, a termination level to the DUT through selection switches, as shown in Figure 5. Each path connects to the DUT individually by a switch controlled through the serial interface. The loads facilitate fast open/short testing in conjunction with the comparator and pullup of the open-drain DUT outputs. 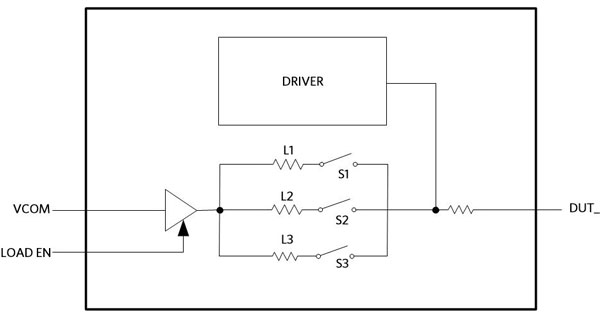 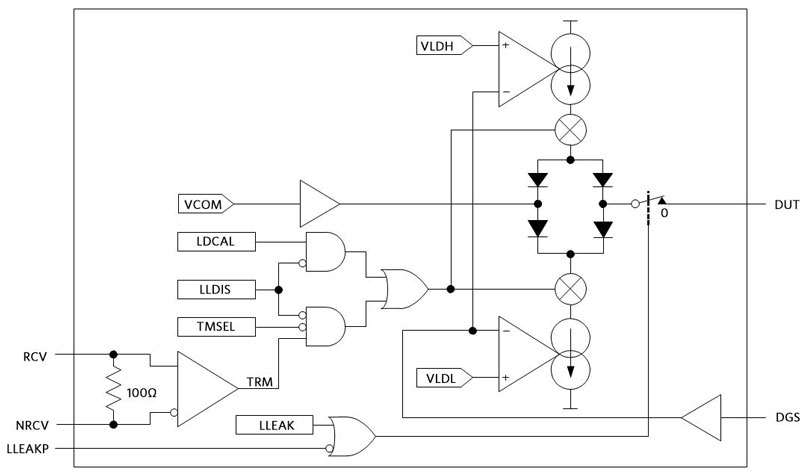 The PMU forces and measures currents and voltages into the DUT. Ideally, a PMU is used to test the DC characteristics of a DUT. Test system architecture is composed of either a PMU that can be shared with a group of PE ICs or a PMU for each pin of the DUT known as a per-pin PMU (PPMU). PPMU architecture exponentially reduces the test time, as every DUT pin can be tested simultaneously. 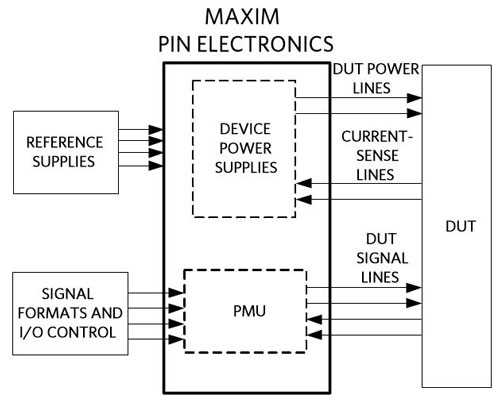 The PMU has different modes of operation based on whether the PMU output pin is forcing current (FI) or voltage (FV) and the PMU measure pin is measuring voltage (MV) or current (MI). Each PMU has voltage clamps to avoid any transient voltages while in FI mode. It also has current clamps to avoid any transient currents while in FV mode. Refer to Maxim Application Note 4343 to understand force voltage/measure voltage (FVMV), force voltage/measure current (FVMI), force current/measure voltage (FIMV), and force current/measure current (FIMI) modes of the PMU.

PMU switches provide force and sense paths that are internally connected to the DUT node, allowing another external PMU or DC source. These force and sense paths are controlled through the serial interface. The force path drives the current/voltage to the DUT through the external PMU or DC source through relatively low resistance. The sense path provides a higher resistance (zero current) feedback path from the DUT node.

A DPS in a testing environment provides the supply voltage required for the DUT. The DPS can be operated in both force voltage (FV) and force current (FI) mode. When the DPS is operating in FI mode, programmable voltage clamps ensure that the voltage is within the range of the DUT. A DPS operating in FV mode acts as voltage source when the load current is within the programmable current limits. If the current limits are reached, then the DPS voltage source transitions into a current source/sink.

The DPS has force and sense lines similar to a typical power supply, as well as the capability to read back and measure the voltage and current. Consider a use case measuring supply current (ICC) by varying the supply voltage (VCC). The force and sense lines of the DPS (operated in FV mode) are connected to device supply pin. The force line provides the required voltage level at the output, and the sense line monitors the applied voltage level. The compensation circuit inside the DPS attempts to maintain a constant supply voltage regardless of the resistance between the DPS and the DUT. Supply current (ICC) is measured through a sense resistor that depends on the selected current range, thus providing an adjustable supply voltage (VCC). PMU and DPS are alike, but the DPS has higher current capabilities than the PMU.

Testers can be widely classified as system-on-chip (SoC) testers or memory testers. In SoC testers, each pin can be tested at different voltage/current levels. In memory testers, several drivers are used to send data to the memory address at the DUT, which are commonly input-only pins; testing readback is not usually necessary on these pins. Because of this one-way communication, the comparator block is more often used in SOC testers than in memory testers. Testing time and tester cost are two important considerations when designing tester architectures. Figures 9, 10, and 11 depict some examples of tester architectures. 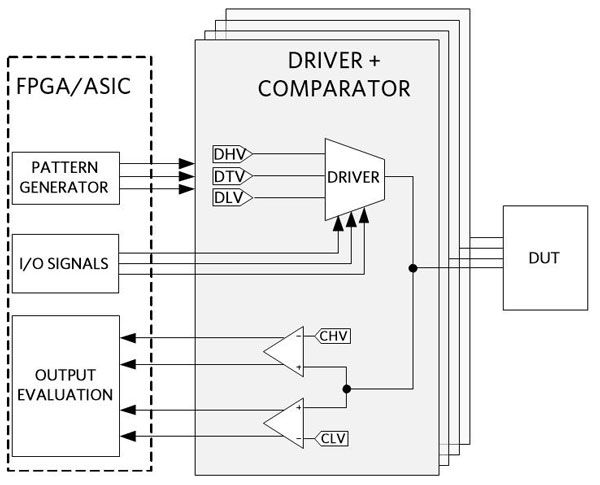 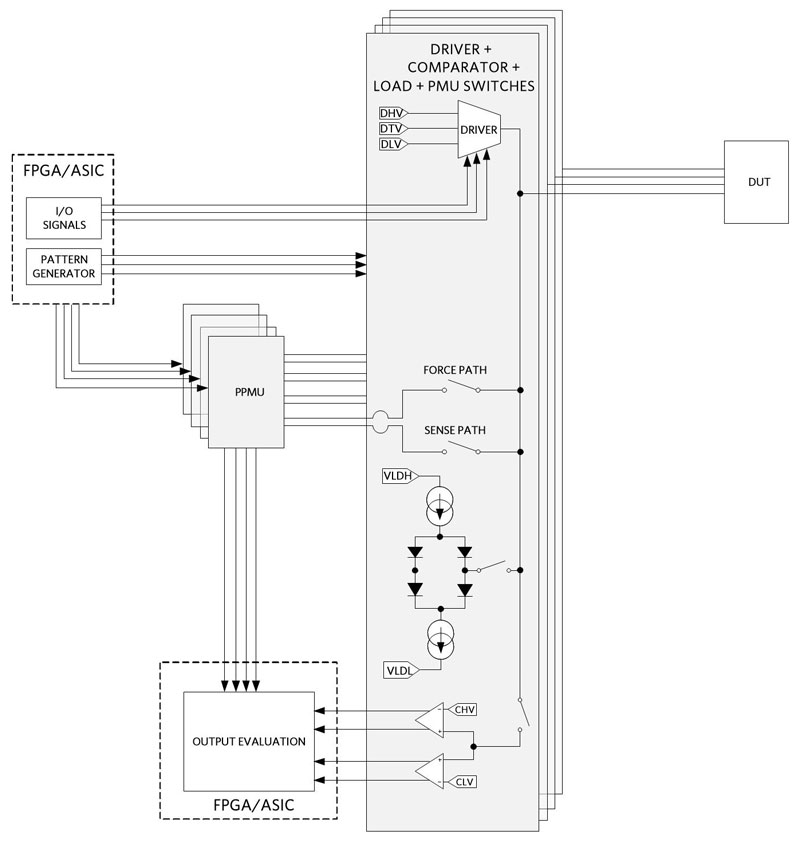 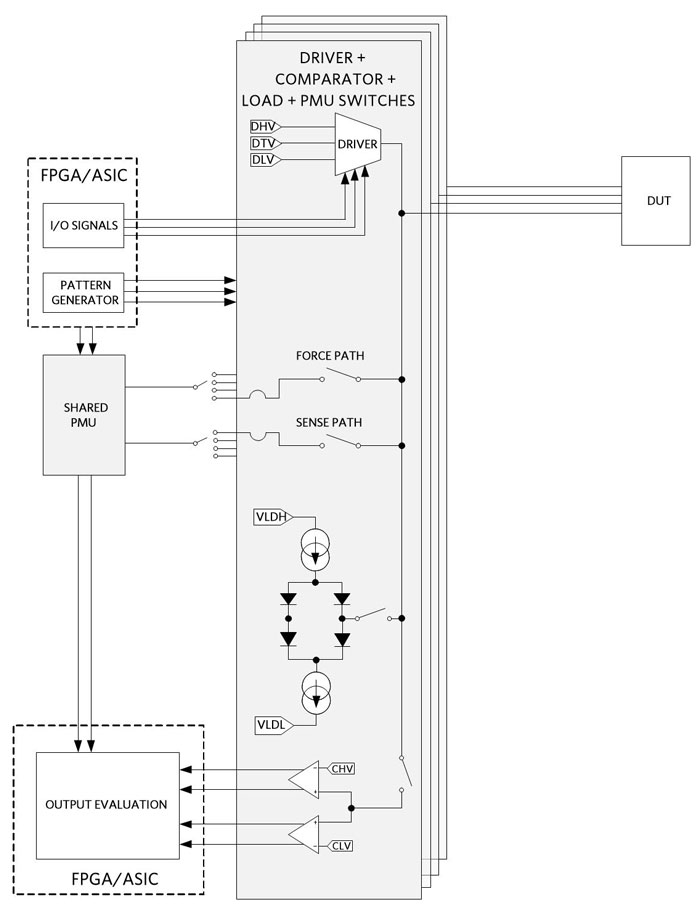 This application note provides a new user with a broad understanding of ATE products and describes key features that Maxim offers in its ATE portfolio. Maxim's ATE products are drivers, comparators, load (DCLs), PMU, and DPS. Different tester architectures are depicted using combinations of these products.