The penetration depth of light into a biological tissue is an important parameter used to determine the performance of a biosensor. Penetration depth is the distance into the skin that the light has traveled. Simulation of the optical penetration depth has been performed with the absorption and reduced scattering coefficient values presented above. Simulation results are shown in Figure 8. 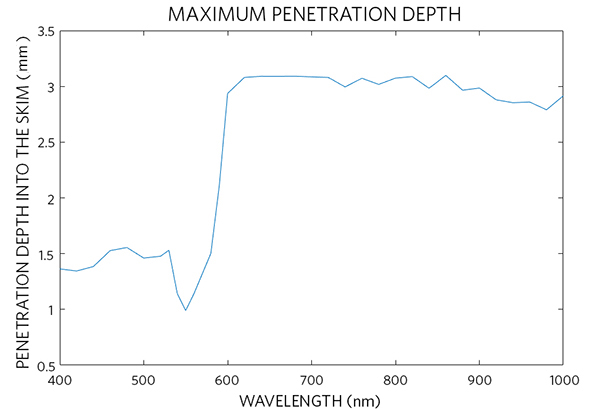 In this article, we have modeled human skin tissue with a five-layer structure where each layer represents its corresponding anatomical layer. To simulate light tissue interaction, the biological characteristics of each layer is moded with three wavelength-dependent numbers, absorption coefficient, scattering coefficient, and anisotropy factor. Then, we have used a commercial ray tracing software to calculate penetration depth of light into skin tissue for simulating the performance of optical biosensor architectures.