筆者: Michael D'Onofrio
要約: This application note describes how designers can secure their Xilinx® FPGA implementation, protect IP, and prevent attached peripheral counterfeiting. Designers can achieve this security by using one of the reference designs described in this application note. These designs implement either SHA-256 or ECDSA challenge-and-response secure authentication between the FPGA and a DeepCover® Secure Authenticator.

To interface the Maxim secure authenticator IC with the FPGA demo board, each RD ships with a compatible plugin module—a Pmod™ port standard developed by Digilent, Inc. The corresponding IC is soldered onto the Pmod board. Regarding the 1-Wire designs, with minor tweaking a SHA-256 authenticator with larger memory density could be used, such as the DS28E22 or DS28E25.

Why Apply Security to an FPGA System?


Systems that use an FPGA to communicate and operate replacement peripherals, consumables, modules, or sensors are commonly targeted by counterfeiters or unauthorized aftermarket companies. These counterfeit versions of a peripheral can introduce safety concerns, reduce quality to the application and, generally, negatively impact the OEM solution. Furthermore, the OEM loses the revenue of peripherals to these counterfeiters. Introducing secure authentication into the solution enables the FPGA to assure peripheral authenticity and to take application-specific action if a counterfeit is detected. As shown in Figure 1, a challenge-and-response sequence between the system and attached peripheral is exercised to confirm authenticity.

Figure 1. Testing for authenticity with a challenge-and-response sequence.


Spartan 6. Static-RAM-based (SRAM) FPGAs have few safeguards to protect that IP (i.e., the configuration data or the FPGA implementation) against illegal copying and theft. The reason is that once the data is loaded, it is held in SRAM memory cells, which can easily be probed to determine their contents. In addition, without some type of security mechanism to protect the configuration data or bit file before it is loaded into the chip, that data is open to snooping. Prowling through that data is possible because the bit stream is usually stored in a separate memory chip read by the FPGA at power-up when it loads its configuration pattern. A cloner could simply copy the configuration file and create clones of the original. These types of FPGAs do not have built-in encryption that would otherwise protect the configuration file from copying.

One way to make the SRAM-based FPGAs more secure is to leverage multichip packaging and mount the nonvolatile (NV) memory inside a package along with the FPGA. Yet if someone opens the package, the data interface between the memory and the FPGA is exposed and the configuration pattern can be compromised. Multichip packaging can also be an expensive endeavor.

Xilinx 7-Series. High-end FPGAs protect internal IP by using security keys and bit-stream encryption. These protection mechanisms greatly mitigate the risk of the IP on the bit file being snooped. Furthermore, these FPGAs do not store sensitive data in insecure SRAM. However, implementing these built-in cryptographic security mechanisms can become cumbersome. Added manufacturing steps mean greater cost. But more importantly, if these cryptographic keys are programmed during contract manufacturing, then the subcontractor will know the keys and you can no longer be assured that your IP is safe.

Solution: Regrettably, for IP protection, the FPGA must offer proper bit file protection so the bit file cannot be modified. If the FPGA does have proper bit file protection, then challenge-and-response authentication can provide IP protection. So an authentication sequence can then be added to the FPGA implementation. If there is a Maxim secure authenticator with a valid security key on the bus, then the FPGA knows that the system is authentic. This is specifically only for FPGAs with built-in encryption of its bit file. In the Maxim solution, the RD calls for the authentication key to be embedded securely into the FPGA implementation code so that the subcontractor would never know this key.


Feature Management. To decrease design time and effort, designers will create fully featured FPGA systems and de-feature certain aspects using firmware to achieve different price points or feature levels. This, however, creates a new problem: a smart customer who needs several fully featured systems could just buy one fully featured unit and several units with reduced features. Then, copying the software, the simpler units behave like the fully featured unit but for a lower price, shortchanging the system vendor.

License Management. At other times, companies create and sell RDs. These are subsequently bought, licensed to, and manufactured by third parties. The RD vendors require barriers to prevent unauthorized use of the intellectual property. For revenue reasons, it is also necessary to track and confirm the number of reference uses.

Overbuild Protection. In all cases, designers might wish to build their end product using third-party contract manufacturing. Subcontractors can be a great extension of a supply chain, and they can manufacture embedded systems efficiently and cost effectively. However, less scrupulous contract manufacturers (CMs) have been known to build more widgets than contracted. Then they can produce bootleg products of the same quality and authenticity as the originals. Indeed, by overbuilding, an unscrupulous CM freeloads on all of the R&D and marketing costs that the designer incurred.

For more information on all the potential applications of secure authentication, refer to application note 3675, "Protect Your R&D Investment with Secure Authentication."

How Does the Authentication Work?

To implement the authentication in the most secure manner, the following are used as general guidelines:

In the context of the FPGA environment, the way that the challenge-and-response authentication works is shown in the following numbered statements. The letters (e.g., A, B, C) correspond to data flows in Figure 2. This section describes SHA-256 symmetric authentication.

If the expected response and the actual response are identical, then the FPGA knows that the authenticator is genuine. If genuine, your security goals—IP protection, counterfeit protection, etc.—are achieved. 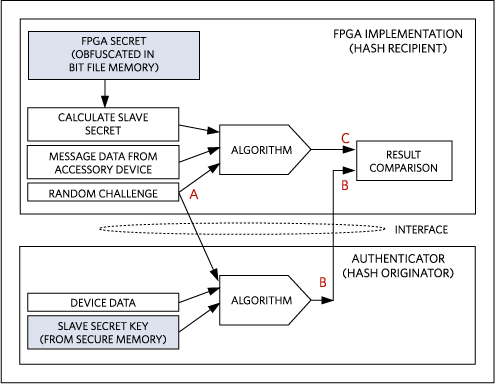 As previously mentioned, authentication between an FPGA and a secure authenticator achieves the security of points 1 through 3 of the Why Apply Security to an FPGA? section. Now, let's observe how to physically set up a security system based on the following block diagrams.

Counterfeit Protection of a Peripheral

To implement counterfeit protection, a system configuration, as shown in Figure 3, should be used. The FPGA, and its corresponding security implementation, resides in an embedded system. Some peripheral device—perhaps a sensor, disposable, consumable, or another embedded system—is the object that, as a designer, we wish to secure. The Maxim secure authentication IC resides in this peripheral device. 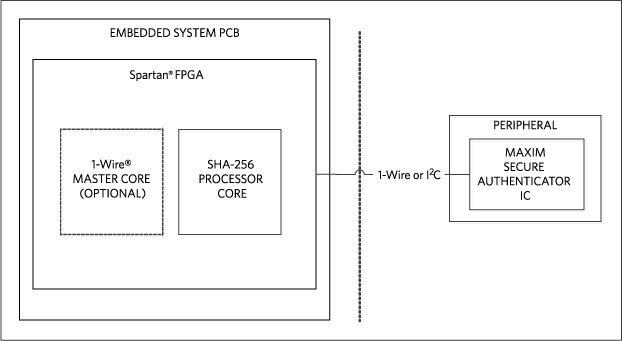 For all other security needs described in the section entitled, Why Apply Security to an FPGA?, the hardware setup shown in Figure 4 should be used. The FPGA, and its corresponding security implementation, resides in an embedded system along with the Maxim secure authentication IC. 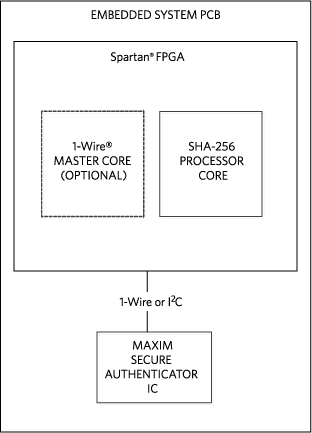 Figure 4. Block diagram for IP protection, and other applications.

MAXREFDES43# with the DS28C22 is unique because it implements bidirectional, small-message encryption of sensitive data communicated between the FPGA and the DS28C22. This encryption feature is optional; the most common use is when the DS28C22 is inside an attached peripheral subsystem. Or, perhaps it is necessary to encrypt sensitive sensor data, calibration data, feature setting data, or personal data (e.g., patient heart rate or SSN).

For more information on the encryption feature of the DS28C22, refer to application note 5785, "Implement Heightened Security with a SHA-256 Master/Slave Authentication System."

Using asymmetric cryptography could be more attractive from two standpoints:

Designers of FPGA embedded systems face many potential security threats including counterfeiting of peripherals and copying of FPGA implementation, among others. Using a Maxim secure authenticator along with either of these reference designs protects FPGA systems from these potential issues.