GPS, Bluetooth, Wi-Fi, 4G, cameras, etc., etc… Mobile phones (and other smart devices) have so many different features, it’s a testament to their high standard of design that they don’t overheat when running all these tasks simultaneously. However, nobody expects them to overheat when they’re in a power-saving (or sleep) mode. Well, recent events have taught us otherwise— a simple battery fault has the potential to cause irreversible heat damage (or worse) to the device. For this reason, you need to have some sort of failsafe temperature monitor in place, even in sleep mode. Of course, this requires some power to be burned (excuse the pun!) and throws up the conundrum: how can a device really be asleep if it’s still awake? Let’s have a look at the options to monitor temperature in sleep mode and you might just be a little bit surprised.

Figure 1. Mobile phones and other smart, portable devices are so function-rich that temperature monitoring even while they are in sleep mode is critical. Comparators can help.

The “Modern” Approach to Temperature Monitoring

Every smart device has a microcontroller, so the obvious thing to do is to use it to set up a simple temperature monitoring circuit using a thermistor like the one in Figure 2. 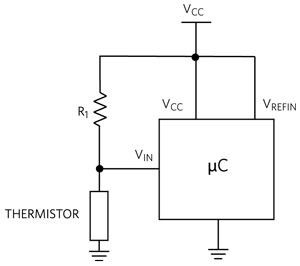 Figure 2. Monitoring temperature with a micro and thermistor.

An analog-to-digital converter (ADC) within the micro converts the analog temperature signal into a digital form. Depending on the measured value, the microcontroller will take appropriate action. For example, if the temperature is determined to be outside the specified range of operation, the controller may decide to shut down certain blocks of circuitry or activate a thermal-setting fuse until the normal temperature range has been restored, thereby preventing possible damage due to overheating. However, to minimize power consumption in sleep mode, the analog input from the thermistor may not be regularly monitored by the microcontroller (or in some modes, not at all). If the battery in the device begins to overheat, the sleeping microcontroller may not be aware of the temperature rise and may be unable to take corrective action. Clearly there is a trade-off to be made between choosing to allocate the resources of the microcontroller in sleep mode (and increasing power consumption) with the potential for a catastrophic temperature rise left unmonitored.

A simpler solution is to use a circuit like the one shown in Figure 3, a temperature monitor with a comparator. 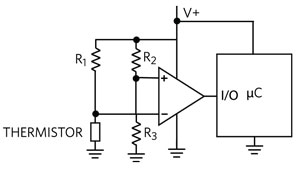 The appropriate choice of resistors and thermistor creates a circuit that will send an interrupt to the microcontroller when a pre-determined temperature threshold has been crossed, waking it up and allowing it to respond appropriately.

Ok, so you can’t believe you’re being shown an undergrad school circuit, and I hear you muttering the usual gripes…comparator uses too much power and takes up too much board space…blah blah…

Well, not any longer! The comparator in Figure 4 isn’t any of those things. 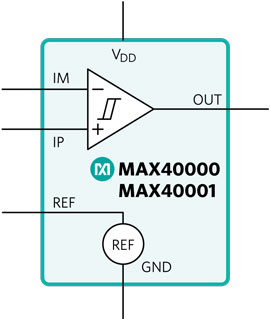 The MAX4000x family of parts are tiny, 1.7V nanoPower comparators with a typical power consumption of only 500nA and with footprints as small as 0.73mm × 0.73mm in a choice of WLP and SOT23 packages. These small footprints allow the temperature detector circuit to be located very close to (or within) the battery pack of a portable device.

So, as you can see, sometimes the older circuits that are now so often forgotten and unloved are doing their best to stay relevant in the “modern” world. Hopefully you’ll agree that this is one of them!