Some people enjoy celebrating Valentine’s Day with flowers, candy, and a romantic night out. But if you’re a maker at heart who gets more excited about voltage regulators, LED displays, and sound boards, you’ve come to the right place. The inventive engineers on Hackster.io have created a variety of projects that you can tackle—and maybe even share with that special Valentine.

Remember that iconic scene in the 1989 movie, “Say Anything,” when John Cusack’s character does the boombox serenade? Of course, the music player in today’s version of this scene would have an on-demand component. Enter the Holo-day St. Valentine’s Day boombox by Team Hologram: Maiky Iberkleid. This heart-shaped boombox is an SMS-triggered music and sound clip player “designed to serenade your valentine on demand,” according to Maiky’s project story. The box, created with a 3D printer, is preloaded with sound clips, and an SMS message triggers the music to play. Hardware components for this project include: Hologram Global IoT SIM Card, Hologram Dash, Adafruit Audio FX Sound Board, speakers, and a solderless breadboard. The software side includes the Hologram Data Router and Arduino IDE. 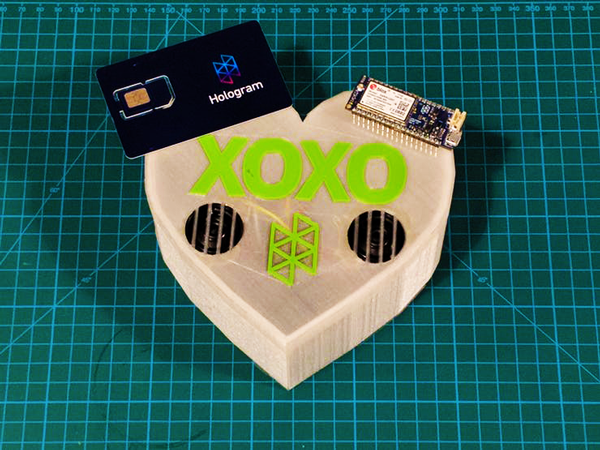 Adrian Perez created another take on a music box. Also shaped like a heart, his “LoveBox” plays a favorite song and features a small screen displaying digital photos. “After dating my girlfriend for a long time, I decided it was time to step up my gift game and develop a completely new gift for her,” Adrian writes in his Hackster project story. “I wanted a gift that could bring together as many elements of our relationship as possible but I also wanted it to be a physical gift. This then lead me to the creation of the LoveBox: a music box that plays our favorite song (La Vie en Rose) and displays pictures of some of our favorite memories.”

The LoveBox itself is a laser-cut wooden box. Hardware components include an Adafruit NeoPixel LED Strip, MikroElektronika OLED C Click, Adafruit Mini External USB Stereo Speaker, a BeagleBoard.org PocketBeagle, a SparkFun microB USB Breakout, and an Adafruit USB Micro to USB tiny OTG adapter. Following the project instructions, you’ll need to download Python files and upload your desired mp3 files as well as images under the same directory. The LoveBox will play any mp3 file using MPlayer and it will transmit images on the OLED C clickboard. The LoveBox can be programmed to play a favorite song and display special photos. Photo courtesy of Adrian Perez on Hackster.io.

Light Up Your Valentine
If you (or your sweetheart) are visual people, you might consider tackling the Scrolling LED Display created by Sumit Grover. This display allows you to create an LED-based visual with customized messages. It’s similar to the messages you might see scrolling through a display on the outside of a bus. You’ll need components including a DC adapter and socket, a microcontroller, capacitors, a transistor, a general-purpose PCB, and an LED. The patterns that Sumit has designed are a heart and ILU, but you are only limited by your imagination. Another crafty design for visually inclined folks is the Valentine’s Sunflower by the circuito.io team. This project results in a 3D-printed sunflower that opens and closes in reaction to light. It’s based on a SparkFun Arduino Pro Mini 328, a SparkFun Mini photocell, and a SparkFun Servo generic metal gear on the hardware side and circuit.io web platform and the Arduino IDE. According to the project story from its developers: “With Valentine’s Day coming up, we started looking for project ideas with a romantic twist. While searching for clues around us our eyes fell on a plastic sunflower that we had on our office window. Truth be told, it was quite ugly, but it gave us an idea - what if we made a flower that moves according to light, just like a real sunflower. After a few revisions (and a bunch of filament) we give you this Valentine's Sunflower! Spread the love.” 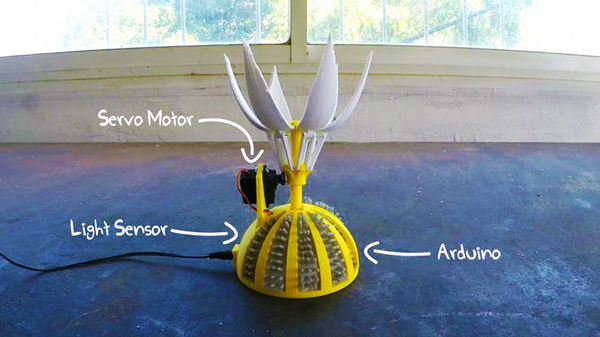 The Valentine’s Sunflower opens and closes in response to light. Photo courtesy of circuito.io team on Hackster.io.

It wouldn’t be a proper modern-day Valentine’s Day without an IoT twist. That’s where the Valentine’s Day Wreath comes in. This interactive wreath responds when people are nearby (the lights on the heart beat faster and faster as a person gets closer) and also tracks how many people come close to it. When no one is around, the wreath “pulses” in a rainbow-colored pattern. Ashwin K. Whitchurch, Venkatesh Bhat, Manikandan S., and Reeza Roland are the makers behind this creation. The wreath is based on some ProtoCentral Kalam IoT and sensing solutions, a NeoPixel LED strip, an Everything ESP WiFi module, and the Arduino IDE. “With all the IoT-connected cat and fish feeders in the world, this seems like the perfect addition to the IoT devices list,” the developers noted in their project story. 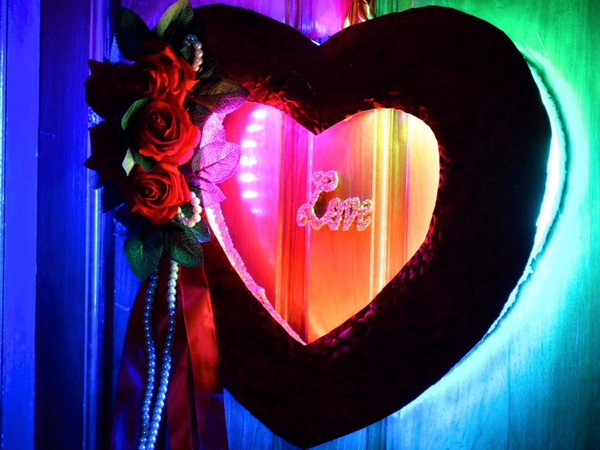 The Valentine’s Day Wreath responds with beating lights as people get close to it. Photo courtesy of Ashwin K. Whitchurch, Venkatesh Bhat, Manikandan S., and Reeza Roland on Hackster.io.

As with all Hackster projects, these romantic creations come with plenty of resources for you to get started, including code, instructions, videos, and schematics. Happy Valentine’s Day!