Many factors determine the overall performance of any linearization solution. Comparing Maxim's RF predistortion system implementation, RFPAL, against solutions operating in backoff, customers can realize the greatest performance benefits. By "spending" 0.4W of added power consumption for RFPAL, customers can get in return up to a 4X improvement in efficiency, thus enabling proportional decreases in the system power consumption. Additionally, linearization enables operation of the PA closer to its PSAT operation point allowing the use of smaller and less expensive power transistors to achieve a desired output-power goal. A direct benefit of the improved power consumption is a reduced annual operating cost (electricity), which, at antenna power levels above 5W, can offset the initial cost of the RFPAL solution in a relatively short time.

In the example below (Table 1), the system power consumption and system efficiency advantages are clear: a 3X improvement in efficiency, a system power reduction of over 67W and a yearly operating cost saving of almost $30. Though not every system will operate at maximum output power all the time, the power supply capacity and system cooling requirements must be designed for worst case. An often overlooked benefit of predistortion, compared to operation in backoff, is the dramatic reduction in size/volume and costs associated with the power supplies and cooling elements (heat-sinks, fans, etc.). 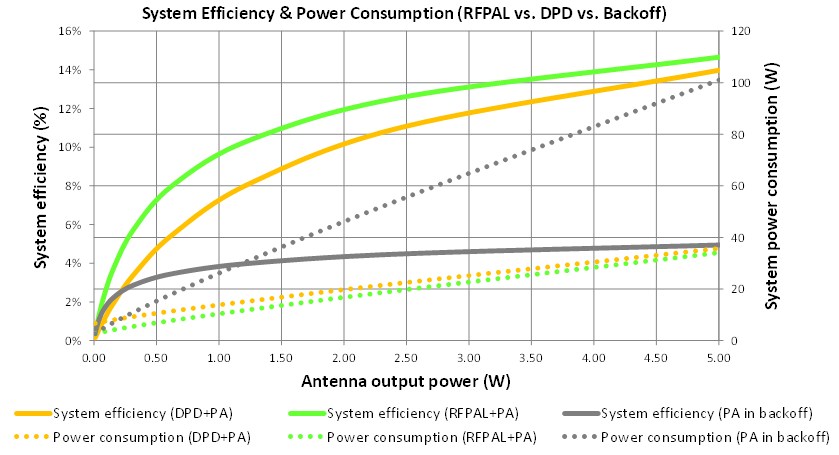 Comparing RFPAL against DPD, an important difference between the two solutions is revealed. Even when DPD provides better final stage PA efficiency (2% better in Table 1 but the difference in most cases is much smaller) than RFPAL, the overall system efficiency is worse due the DPD's higher power consumption. As antenna output power levels drop below 10 W and approach 500mW, the improvement in system efficiency grows progressively larger for RFPAL due to the DPD power consumption becoming a larger portion of the overall system power consumption. With similar correction performance to DPD, but improved power consumption and efficiency, reduced complexity, lower system cost and a small footprint, RFPAL is an ideal choice for small cell designs which are part of heterogeneous deployments.

Finally, there exists an entire class of applications that DPD cannot address due to costs and, by its very nature, the requirement for a digital processor. These markets include analog remote radio heads, power amplifier modules, repeaters and microwave backhaul systems. Maxim's RFPAL is an adaptive RFIN / RFOUT and standalone linearization solution that requires no external digital control. The digital port shown in Figure 4a is optional and used in applications where reporting functions are desired and not needed for the markets above. RFPAL is simple to integrate and requires no expertise in predistortion algorithms making it today the only alternative to operation in backoff.

Maxim's RFPAL devices are ideally suited to cellular applications requiring operation from 168 to 3600MHz, PAR of up to 10dB, static average power waveforms like CDMA and WCDMA, dynamic average power signals like WiMAX, HSDPA and LTE, and with a wide range of PAs including Class A/B or Doherty, in different process technologies including LDMOS, GaN, GaAs, etc. Maxim’s RFPAL can be operated over a wide case temperature range of -40°C to +100°C.

Looking beyond cellular infrastructure applications, Maxim also has products for the microwave radio and broadcast infrastructure markets. For example, in the broadcast market, the RFPAL has been integrated into DVB-T, ATSC and CMMB transmitters operating at greater than 600W of average output power. Additionally, any application requiring linear amplification of RF signals can benefit from Maxim's solutions, including white space, military and public safety, etc.