An inverting op amp is an operational amplifier circuit with an output voltage that changes in the opposite direction as the input voltage. In other words, it is out of phase by 180o。

What is an inverting input?

Circuit diagram symbol for an op amp with inverting (-) and non-inverting (+) inputs.

How do inverting op amps work? 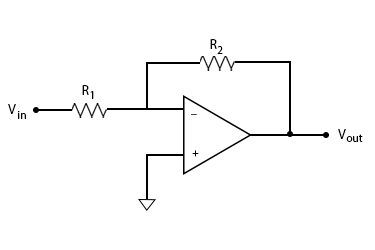 The current flowing through R1is I=Vin/R1，and since the Current Rule states that the inputs draw no current, all of that current must then flow throughR2.

This makes the gain of the inverting op amp circuit -R2/R1.The gain is negative, meaning the output is out of phase with the input.