A power amplifier (PA) converts a low-power signal to a higher power one. Two common examples are audio amplifiers, used to drive loudspeakers and headphones, and RF power amplifiers, such as those used in the final stage of a transmitter.

What are the types of power amplifier?

Power amplifiers are divided into classes based on the amplifier’s characteristics. Classes A, AB, B, and C depend on their conduction angle, which is the number of degrees in a cycle during which the amplifying device conducts. Classes D and E are switching amplifiers. Classes D, DG, and H are also common audio amplifiers that are similar to Class AB but use different techniques to improve efficiency.

A Class A amplifier has a 360o conduction angle (100% of the input signal is used). It is the most linear, meaning the output signal is the best representation of the input. It is, however, the least efficient. Subsequent classes are increasingly efficient and decreasingly linear: 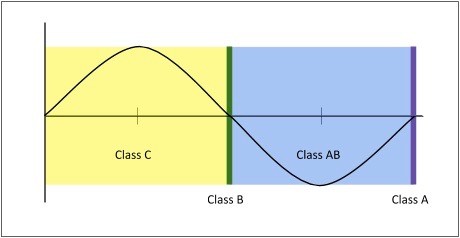 Class D amplifiers use pulse-width modulation (PWM) to produce rail-to-rail digital output signal with a variable duty cycle to approximate the analog input signal. They are highly efficient because the output transistors are always either fully turned on or fully turned off.

The Class DG amp is similar to the Class D amp but also uses a multilevel output stage to sense the magnitude of the output signal. It then switches the supply rails as needed to supply the required signal power more efficiently.