PSAP enhances user’s listening experiences with hearables in challenging environments. Long delay in the audio system creates distortion known as comb effect in PSAP. This paper investigates the root cause of the comb effect and explains how Maxim’s PSAP based on anti-noise solution yields a superior system performance than conventional PSAP solutions.

Hearable devices are designed to improve the user's listening experience by reducing ambient noise using passive and active noise cancellation (ANC) and amplifying the desired ambient sound. Hearables that support amplification of desired ambient sound are commonly referred to as personal sound amplification products (PSAPs). In this white paper, we consider PSAP an assisted listening feature in hearables, which is used to enhance hearing in challenging environments for the hearing impaired as well as people with normal hearing. The basic building blocks of a PSAP system may include but are not limited to:

A simplified view of the typical audio system for PSAP is shown in Figure 1, where the analog microphone signal is converted to digital, decimated in the audio codec, and transmitted to the Bluetooth (BT) SoC or DSP Core through a buffer, and then processed in the DSP blocks, transmitted back to the codec through a buffer, interpolated before converting to analog for the amplifier to drive the speaker output.

When PSAP is enabled, two types of sounds reach a user's eardrum, as shown in Figure 2. Sound S1 is the residual ambient sound (and/or the user's own voice) because of the hearable device occluding the ear opening and blocking the sound from reaching inside and escaping outside of the ear canal. Sound S2 is the PSAP output of the ambient sound captured by the microphone, processed by PSAP DSP blocks, and finally generated by the speaker, where an inherent delay caused by the audio system might be involved, depending on the audio processing chain design. These two sounds sum at the user's eardrum (also known as, acoustic wave superposition) to create a complete sensation of PSAP experience. 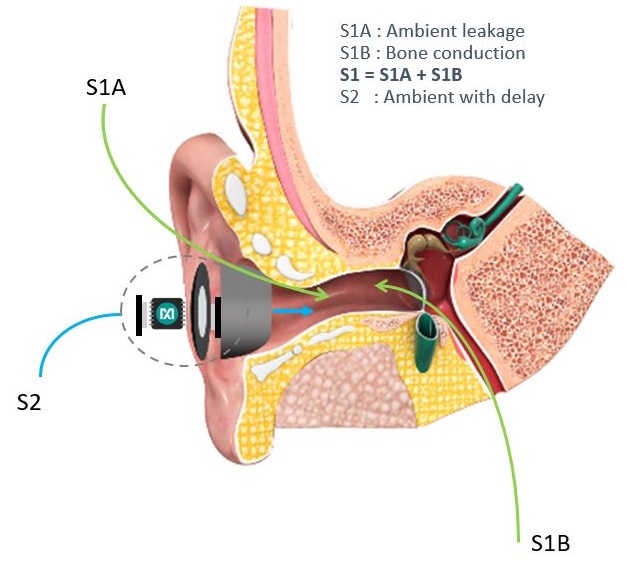 To understand the consequence of the summing effect of two sounds in the presence of a relative delay and gain amplification between them, we simplify the signal model as shown in Figure 3. Based on this model, we carried out a study to understand how delay and gain affect the output. In this case, we take two values of delay at 3ms and 0.4ms, with gains at 0, 15, 30 dB.

Figure 4 shows the normalized frequency response of the sum of two sounds, where we can clearly see that both delay and gain affect the output significantly. With a 0 dB gain, a clear distortion in the form of multiple notches can be observed. This distortion is known as the comb effect and might degrade the sound quality and create an echoic or reverberation effect. Longer delay (e.g., 3ms) creates more notches at much lower frequency than shorter delay (e.g., 0.4ms). With increased gain, such comb effect has been greatly alleviated to form a ripple of 2-3 dB at 15 dB gain or an almost flat response at 30 dB gain, where the two delays do not show much difference.

Now let us examine the comb effect of a conventional PSAP solution in typical Hearables use cases. As shown in Figure 5, sound S1 is usually the result of the passive attenuation that shows attenuation (e.g., 15 dB) only at high frequencies. Sound S2 is the PSAP output, and for an example, we consider two cases of PSAP with gain at 0 dB and 15 dB, respectively. The simulation results of the comb effect are shown in Figure 6, which indicates that long latency (such as 3ms) could incur comb effect when the gain is low (e.g., 0 dB), resulting in audio distortion and inferior listening experiences. 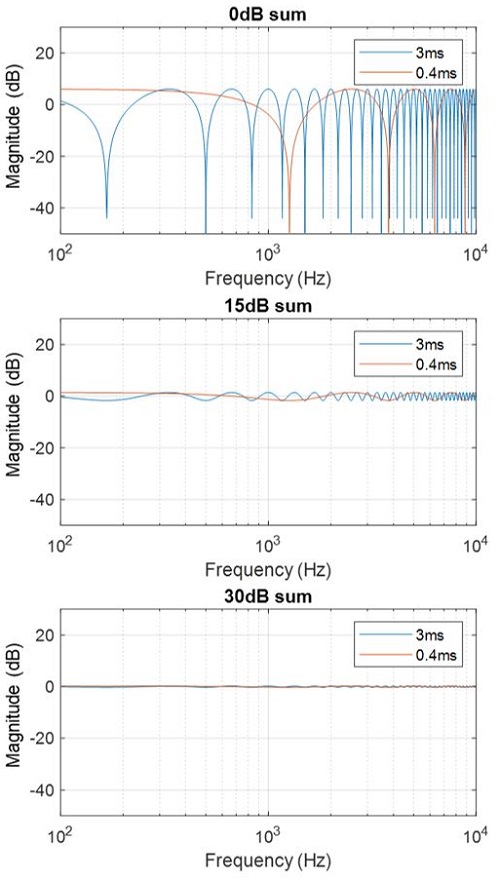 Figure 4. Frequency response of sum of two sounds based on the simplified signal model. 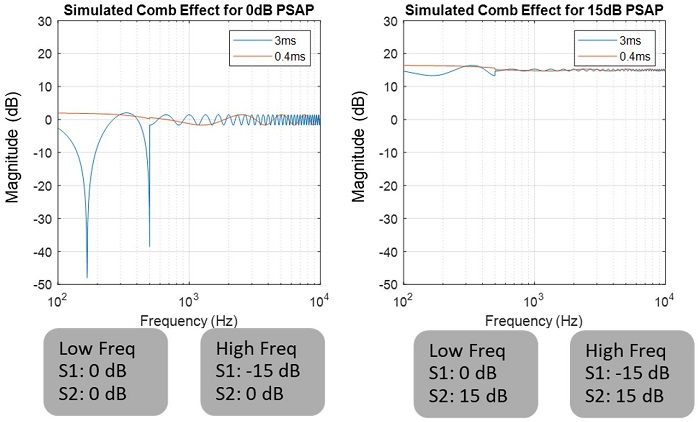 Mitigation of the comb effect in PSAP can be achieved in two ways; by reducing the delay and/or by increasing the gain difference between the two summing sounds, as implied in the above study. Reducing delay in audio systems (see Figure 1 as a reference) usually requires the use of very high sampling rate and small buffers in audio conversion (analog-to-digital and digital-to-analog), audio data transmission between codec and SoC/DSP cores, and DSP blocks. Such requirements incur higher computation load, poor power efficiency, and degraded audio performance, or limited system design and tuning flexibility.

To overcome these issues, Maxim proposed the solution based on an anti-noise that allows the PSAP system to manage the gain levels between the two sounds reducing the level of S1 in low frequency. Introducing MAX98050, the first low-power, high-performance audio codec designed for always active hearables, enabling differentiating features such as noise cancellation and voice/ambient enhancement. Maxim's patent pending anti-noise solution for PSAP is enabled by utilizing the integrated low-power, low-latency digital filter chain configured to generate anti-noise, while sending the microphone record and playback audio data to the host processor (e.g., Bluetooth SoC) at typical audio sampling rates and buffer schemes for flexible and optimal PSAP algorithms design and tuning.

As shown in Figure 7, MAX98050 generates anti-noise C1 that interacts with the original passive ambient sound to form a new sound S1, with reduced level at low frequencies. A simplified block diagram of this solution is shown in Figure 8, based on which the comb effect results have been simulated where the result of anti-noise is simulated as 15 dB reduction in low frequencies. As shown in Figure 9, Maxim's anti-noise solution creates more gain difference between S1 and S2, leading to similar performance between long and short delays in both PSAP gain cases. In addition to the simulation, measurements based on the real form factor and real-time evaluation system have also been carried out to validate the proposed anti-noise solution. 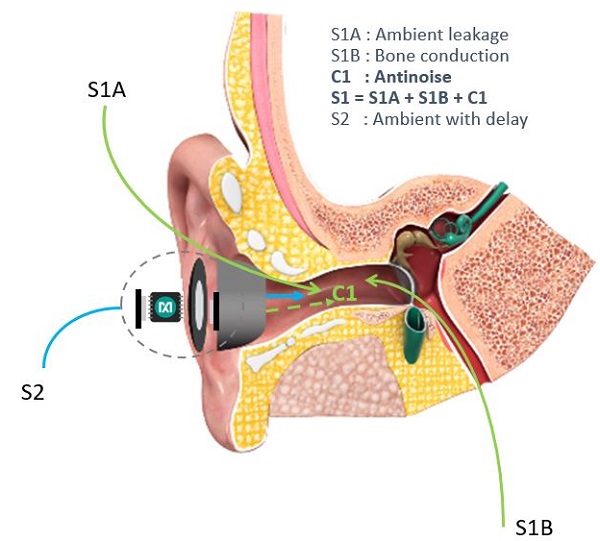 Figure 7. Two sounds reaching the eardrum in PSAP with anti-noise. 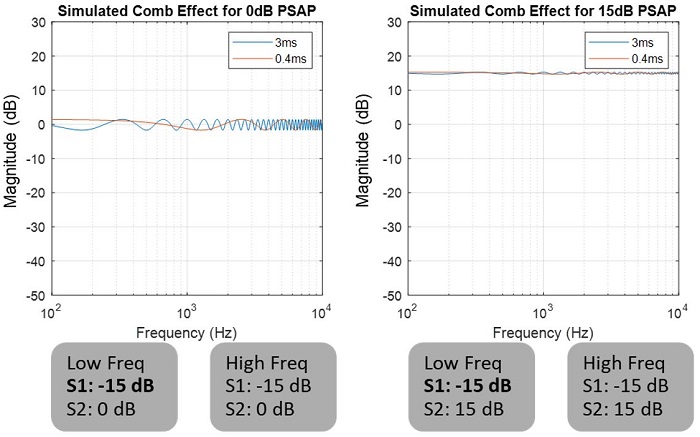 In this white paper, we explained the comb effect problem that plague the PSAP systems for hearables. Consequences of long delay for PSAP processing are studied in the presence of different gain levels. Reducing delay in PSAP system leads to poor performance and high power. Built upon the first low-power always-active codec MAX98050, Maxim introduced the solution based on an anti-noise to mitigate comb effect in PSAP, leading to improved audio and power performance as well as flexible system design for the next generation hearables.