/
How to Select a Transformer for an Isolated Buck Converter

How to Select a Transformer for an Isolated Buck Converter

This tutorial discusses how to choose a transformer for an iso buck converter and reviews why we use a simplified equation from the MAX17681/MAX17682 datasheet. It also provides an overview of the basic principle of an isolated buck converter.

How Does an Isolated Buck Converter Work? 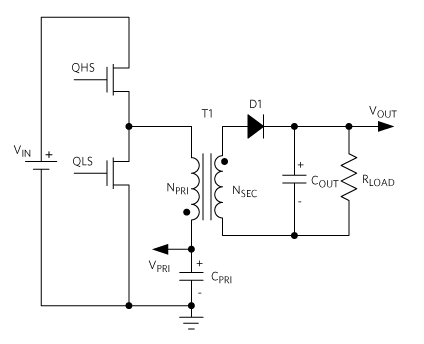 During on time, the high-side switch (QHS) is on, and the low-side switch (QLS) is off, the transformer magnetizing inductance (LPRI) is charged up. The arrow in the block diagram (Figure 2) shows the current flow direction. The transformer primary current increases linearly. The current ramping slope depends on (VIN - VPRI) and LPRI. The secondary-side diode (D1) is reverse-biased during this time interval and loads current flow from COUT to load. 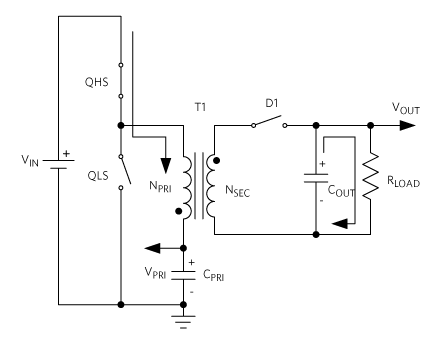 During off time (Figure 3), QHS is off and QLS is on and the transformer primary-side inductor is discharged. The primary current flows from QLS to ground, D1 is forward-biased, and the secondary current (NSEC) flows from the second-side coil to COUT and load. COUT is charged up during this time. (Turning off QHS and turning on QLS cannot change the current direction, it only changes the current slope. Positive current decreases until 0A, then the negative current increases). 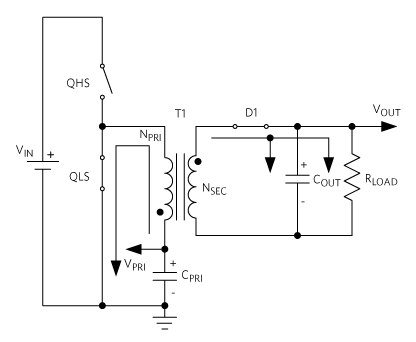 Which Spec Will Influence the Transformer?

When designing a converter, some specs should be declared and defined as it will determine which component will be used, especially in a transformer.

Obviously, energy was transferred to the secondary only in TOFF time. The turns ratio can be decided by the following equation:

Where VD is the diode (D1) forward-bias voltage. For Vpri, assign a maximum duty cycle in the range of 0.4 to 0.6. The Vpri can be calculated by the following equation:

Where D is the maximum duty cycle and VIN_MIN is the minimum input voltage. From Equation 2, calculate the turns ratio. Since the inductor is following volt-second balance low, the required inductance is calculated by the following equation in TON time:

Where f is the switching frequency and ΔI is the ripple current. As discussed before, ripple current equals the DC output current multiplied by a coefficient:

Where K is the coefficient. But in iso buck converter topology, there is a transformer not an inductor. How do we deal with this? The current ratio equals the turns ratio inversely:

Where Ipritoff is the secondary current, which is converted and transferred to the primary side during TOFF time. The sum of the primary and secondary-side current can be considered as an equivalent inductor current.

Where ILeq is the equivalent inductor current. If the transformer has three more windings, this is the following equation:

But is this correct? Let’s verify it with the simulation result based on the MAX17682. Figure 4 shows a screenshot of the MAX17682 typical circuit drawn in SIMPLIS. Current probes, IPRI and ISEC1, were placed on both sides of the transformer T1.

Figure 5 is a screenshot of the transient simulation resulting from two probes. Two current waveforms were added by using the above equations.

Clearly, the added current (cyan) results in a triangle wave, just as the inductor in a non-iso buck converter. The transformer primary ΔI can then be easily calculated:

Typically, an assigned load current ripple is 0.2 times the DC output current. K can be assigned to 0.2 times Nsec/Npri. At the same time, the primary peak current should be guaranteed less than the limited switch. Where Ipk is:

The transformer primary inductance can be easily calculated as:

By using the turns ratio, primary inductance, output power, output current, and isolation voltage parameters, a decision can be made on the inductor design.

Why Does the Simplified Equation Work?

There may be some uncertainty using the MAX17682 data sheet (Figure 6) when selecting inductance. Let’s see how we can better understand it and use it for our application.

According to the above example, Equation 10 can be rewritten to follow this equation for TOFF time.