/
Hearables Get Longer Life with SIMO

A typical hearable solution with a low level of integration leads to inefficiencies in terms of both PCB space and power consumption. On the other hand, a single-input multiple-output (SIMO) architecture can efficiently deliver more power in a smaller space, enabling longer battery life and smaller form factors for hearable devices.

Hearable devices are an emerging market at the intersection of wireless stereo earbuds and fitness monitoring. However, the small form factor escalates the miniaturization challenge for electronics and presents additional challenges for battery life. This design solution presents an innovative power management system that delivers power with high efficiency in a very small space, while enabling longer battery life for miniaturized hearable devices (Figure 1). 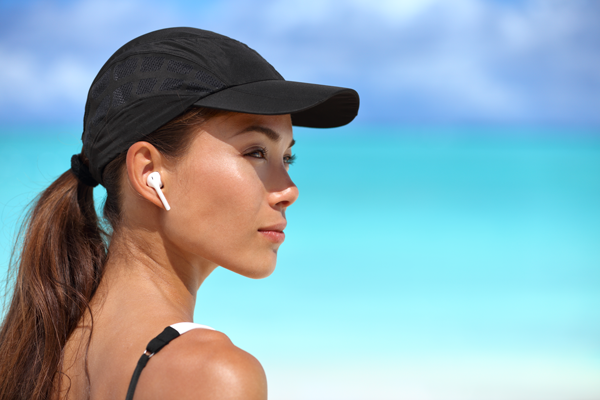 A typical hearable power management system is shown in Figure 2. A power management IC (PMIC) uses a battery charger, a buck converter, and an LDO to power the sensors. A second IC, a dual LDO, powers the microcontroller, Bluetooth®, and audio. For simplicity, the external passives are not shown. 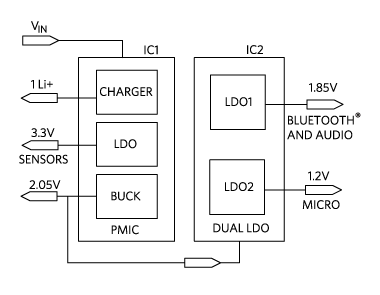 The complete power tree for a typical implementation is shown in Figure 3. The heavy use of LDOs results in an overall efficiency of only 69.5%. 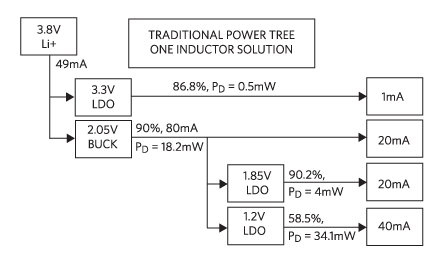 All of the active and passive components of the power flow diagram in Figure 2 are included in the solution shown in Figure 4.

This typical hearable solution occupies a PCB area of about 41.5mm2. The relatively low level of integration as well as the use of multiple LDOs and bigger passives results in a solution that is inefficient in terms of both space and power. 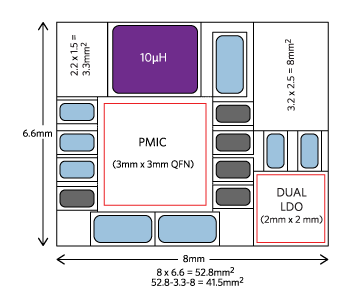 The power management IC in Figure 5 (MAX77650) integrates the battery charger and regulation needed to power the sensor (3.3V), the microcontroller (1.2V), the Bluetooth, and audio (1.85V), all in one chip. The small PMIC eliminates the wasted space associated with using multiple packages. A SIMO buck-boost regulator implements three switching regulators that utilize a single inductor, which reduces the necessary space. In addition, high-frequency operation allows the use of a small inductor, further minimizing the required space. One LDO is on-board for noise-sensitive loads. For simplicity, the external passives are not shown. 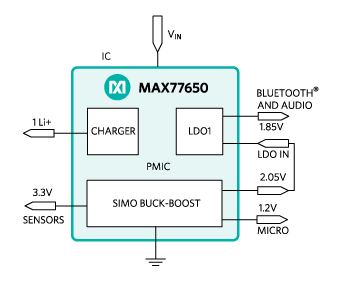 Figure 6 shows the PMIC power tree with each regulator’s output voltage, load current, efficiency and power dissipation (PD). Three of the four loads connect to the Li+ battery via a high-efficiency SIMO switching regulator. The fourth load is powered by the LDO from the 2.05V SIMO output, which achieves 90.2% efficiency (1.85V/2.05V). The overall system efficiency is an outstanding 78.4%.

A comparison between the power performance for both solutions is shown in Table 1. 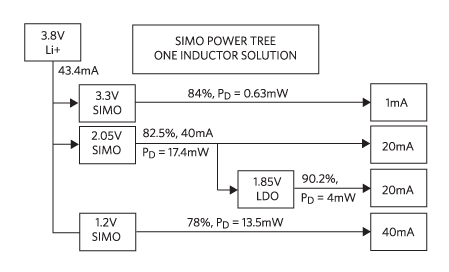 The superior efficiency of the SIMO solution results in significantly lower battery drain, while its wider operating range, down to 2.7V, prolongs the untethered operation of hearable devices. 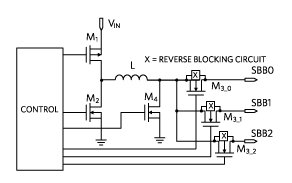 In hysteretic, discontinuous current-control mode, the inductor builds up current with M1 and M4 "on" at the rate of VIN/L. When it reaches a set limit, the current is delivered to the selected output via the M2 and M3_x transistors, as shown in Figure 8. Outputs are serviced in the order requested by their output comparators.

One of the main features that differentiates a hearable device from a standard stereo Bluetooth headset is the integration of one or more optical or inertial MEMS sensors. The optical sensors use the reflection from an integrated LED to measure blood oxygen, pulse rate, or other vital signs. To generate sufficient light intensity, the LEDs need to run at a higher range of voltage (4V to 5V) than the typical range of Li+ batteries. Designers have a difficult choice: add a buck-boost to the system, which requires yet another IC; add another inductor and more capacitors, which takes up valuable space and volume; or sacrifice the signal-to-noise ratio and risk inaccurate measurements and a poor user experience. The SIMO buck-boost architecture solves this problem by using any one of the outputs set to the desired voltage (up to 5.5V) to drive the LED and optimize sensor performance.

Thanks to its SIMO switching regulators and its efficiently biased LDO, the small MAX77650 PMIC (a 2.75mm x 2.15mm x 0.8mm WLP) delivers power with minimum losses in a PCB space that is less than half of a typical implementation. The solution layout in Figure 9 accounts for all active and passive components. 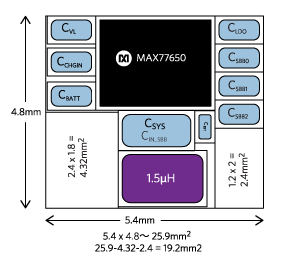 The total occupied board space is a mere 19.2mm2. In addition, the MAX77650 draws only 300nA in standby mode and 5.6µA in active mode. This saves valuable battery life and again helps reduce the system size by allowing the use of the smallest battery possible while prolonging the use time between each charge.

We reviewed a typical hearable solution with a low level of integration that leads to inefficiencies in terms of both PCB space and power consumption. Thanks to a unique SIMO architecture, the MAX77650 and MAX77651 PMICs efficiently deliver more power in a smaller space, enabling longer battery life and smaller form factors for hearable devices.

A similar version of this design solution originally appeared in Power Systems Design on August 03, 2017.