Diabetes sufferers must continuously monitor their glucose levels to help them decide when to take the medication that they need to manage their condition. Until recently, this was commonly done using handheld blood glucose monitors in a process that was both disruptive and invasive. A new type of continuous glucose monitor (CGM), located in a disposable wearable patch, monitors glucose level beneath the skin. This technique is less invasive and can instantly send an alert to the wearer whenever medication is required. In this design solution, we explain the role and functionality required of the electrochemical sensor AFE used in a CGM. We then propose a tiny, low-power electrochemical AFE IC that meets these requirements, making it suitable for CGM and other body fluid analysis applications.

“Chasing perfection with…diabetes is impossible. There's so much that's out of your hands and finding a way to remain calm and patient in moments where diabetes interrupts your life is key.” Doubtless, the words of internationally renowned singer/actor Nick Jonas, who suffers from Type 1 diabetes, resonate loudly with the other 30+ million diabetes sufferers of all types in the U.S. Lancets, test strips, glucose monitors, syringes, and insulin pumps are just some of the paraphernalia that beset their daily lives (Figure 1). 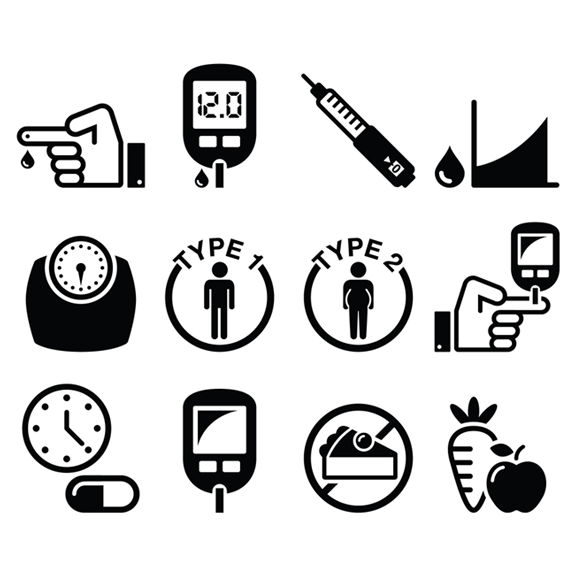 Figure 1. The realm of diabetes patients.

Thankfully, the recent advent of the continuous glucose monitor (CGM) promises a future where diabetes management will become much less invasive. In this design solution, we briefly describe the different types of diabetes and explain why glucose monitoring is critical to how sufferers manage their condition. Next, we outline the main components of a CGM and explain why not all electrochemical sensor analog front-end ICs are suitable for use in this application before finally presenting an electrochemical sensor AFE that meets not only the criteria required for use in this burgeoning medical technology but has several additional safety and other beneficial features that will further enhance its application.

Diabetes Mellitus (more commonly referred to as just “diabetes”) is a chronic metabolic disorder caused by inadequate production or use of insulin, a hormone produced by the pancreas that allows the body to use and store glucose. Untreated diabetes can, over time, lead to hyperglycemia (or elevated blood sugar) which can cause serious damage to nerves, organs, and blood vessels in the body. There are two main variants of the disorder. Type 1 diabetes (previously called insulin-dependent diabetes) is usually diagnosed in children, teens, and young adults, but it can develop at any age. In type 1 diabetes, the pancreas makes very little or no insulin. Patients with type 1 diabetes need to take insulin injections (or wear an insulin pump) every day to regulate their blood sugar levels for energy production. Only about 5% of diabetes patients have type 1. Type 2 diabetes most often develops in people over age 45, but an increasing number of children, teens, and young adults are also developing it. It is caused by lifestyle factors (age, diet, lack of exercise, excess weight, medication) which interfere with the body’s ability to produce and use insulin effectively. While it can be managed through modified diet and lifestyle changes, it can progress to the point where, like type 1 diabetes, insulin must be administered. Ninety-five percent of diabetes patients suffer from type 2 diabetes.

In order to determine when insulin should be administered, patients are required to monitor their glucose levels. Typically, patients intermittently collect a small blood sample (usually by pin-pricking a fingertip) and place it on a “test strip” which is then inserted into a handheld blood glucose meter (BGM). The result on the meter display (Figure 2) assists the patient in determining if they require insulin. 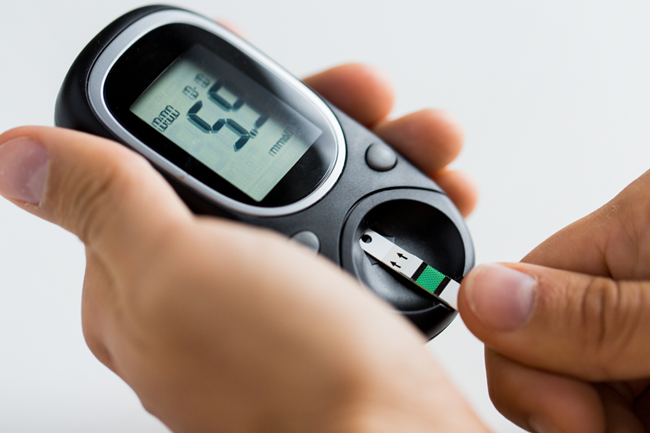 Alternatively, a more recent innovation called a “continuous glucose monitor” (Figure 3) has been approved for use by diabetes patients to track their glucose levels. 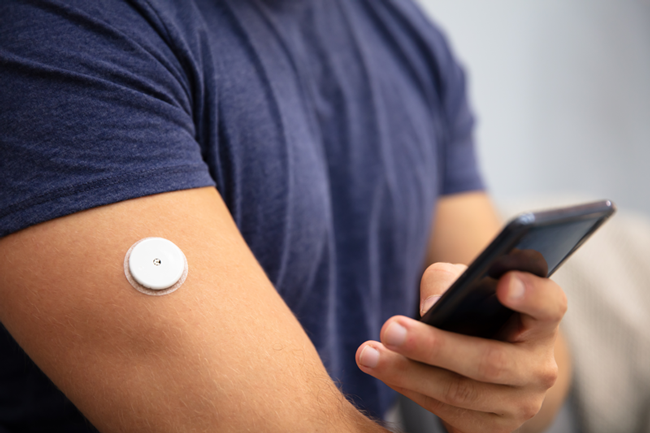 This ‘patch-type’ device is worn continuously by patients, usually on their arm or stomach (patches are disposed of and replaced after a few days). Instead of using blood to measure glucose levels, it works by monitoring the glucose level in the interstitial fluid of the skin. As shown in Figure 4, a small probe is placed just below the surface of the skin to make this measurement, which is then transmitted wirelessly to a handheld reader or smartphone. 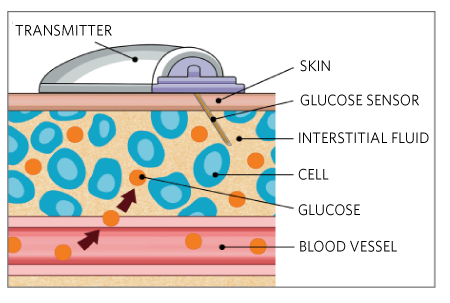 Figure 4. Cross-section illustration of a CGM contacting with skin.

The main advantage of this device is that it allows patients to continuously monitor their glucose levels without interruption and be alerted by an alarm whenever they require insulin. Until recently, these devices were only approved for use “adjunctive” to handheld monitors (i.e. a patient was still required to take a blood sample and use a blood glucose meter to confirm the reading of the CGM for calibration). However, this requirement has since been removed for some monitors, which are now described as “non-adjunctive,” meaning that patients can rely on the reading from a CGM alone. It is envisaged that in the future, readings from a CGM will be transmitted wirelessly to an insulin-pump (Figure 5) which will then automatically administer insulin from a portable reservoir worn by patients, in a closed-loop type system. (Although insulin pumps are currently available, they are usually only worn by diabetes sufferers who struggle to control their blood sugar levels using injections alone). 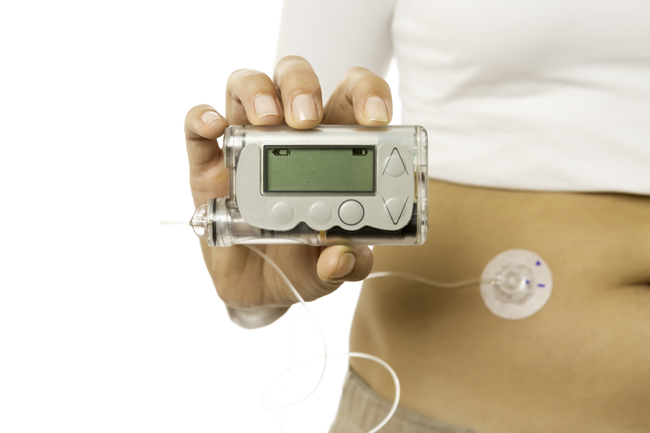 A simplified block diagram of a CGM is shown in Figure 6.

Although both BGMs and CGMs measure glucose levels by electrochemical means they require different types of AFEs. Electrochemical test strips used in BGMs have electrodes where a precise bias voltage is applied with a digital-to-analog converter (DAC), and a current proportional to the glucose in the blood is measured as a result of the electrochemical reaction on the test strip. There can be one or more channels, and the current is usually converted to a voltage by a transimpedance amplifier (TIA) for measurement with an analog-to-digital converter (ADC). The full-scale current measurement of the test strip is in the 10µA to 50µA range with a resolution of less than 10nA. Ambient temperature needs to be measured because test strips are temperature dependent. The simplest configuration is a self-biased test strip (Figure 7) which has two electrodes with current measured at the working electrode (WE) with the common (or counter) electrode (CE) grounded. There can be multiple channels on a single test strip, with additional channels for either a reference measurement, initial blood detection, or to ensure that the blood has saturated the reaction site. An alternate configuration actively drives both electrodes and measures at the common electrode.

Unlike BGMs, CGMs use a technique called electrochemical impedance spectroscopy (EIS) which adds an AC voltage to the DC voltage to record both real and imaginary measurements. EIS is often implemented with a sensor with three electrodes, constructed in a counter configuration (Figure 8). Current is measured at the working electrode (WE) while force-sense circuits drive the counter electrode (CE) and reference electrodes (RE). There is an important advantage to this configuration: the bias voltage at the reaction site on the test strip is set and maintained more accurately throughout the measurement. 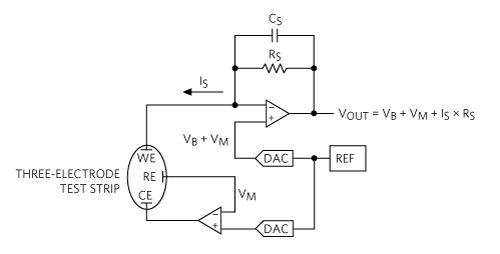 The IC shown in Figure 9 can be used in either two- or three-channel, AC or DC sensing applications, and has several advantages over similar parts. With a single three-electrode implementation, this AFE has a DC bias current of only 3.5µA (typical), a DC measurement conversion current of only 7.3µA (typical), and an EIS AC measurement current of only 950µA (typical at 80Hz). It’s operating power (critical in a battery-powered CGM application) is 50% to 70% lower than that of other electrochemical AFEs. It also operates over the widest supply voltage range (1.71V to 5.5V). Other benefits of this IC include the fact that it comes with the most accurate integrated temperature sensor for this type of part (±0.5°C, +30°C to +50°C range) and has a Sensor Detection mode (ensuring the IC waits in a low-power mode when no sensor is detected). Unique safety features include an Open-Circuit Measurement mode (allowing the ADC to measure the channel’s three-electrode voltages for compliance while independent of the sensor) and a voltage and temperature monitor for the battery. This device also supports a programmable cyclic voltammetry mode and square-wave voltammetry mode. It is available in a 25-bump WLP, with a 8.6mm2 footprint that represents a space-savings of almost 50% compared to similar ICs, critical within the limited confines of a patch-worn device. 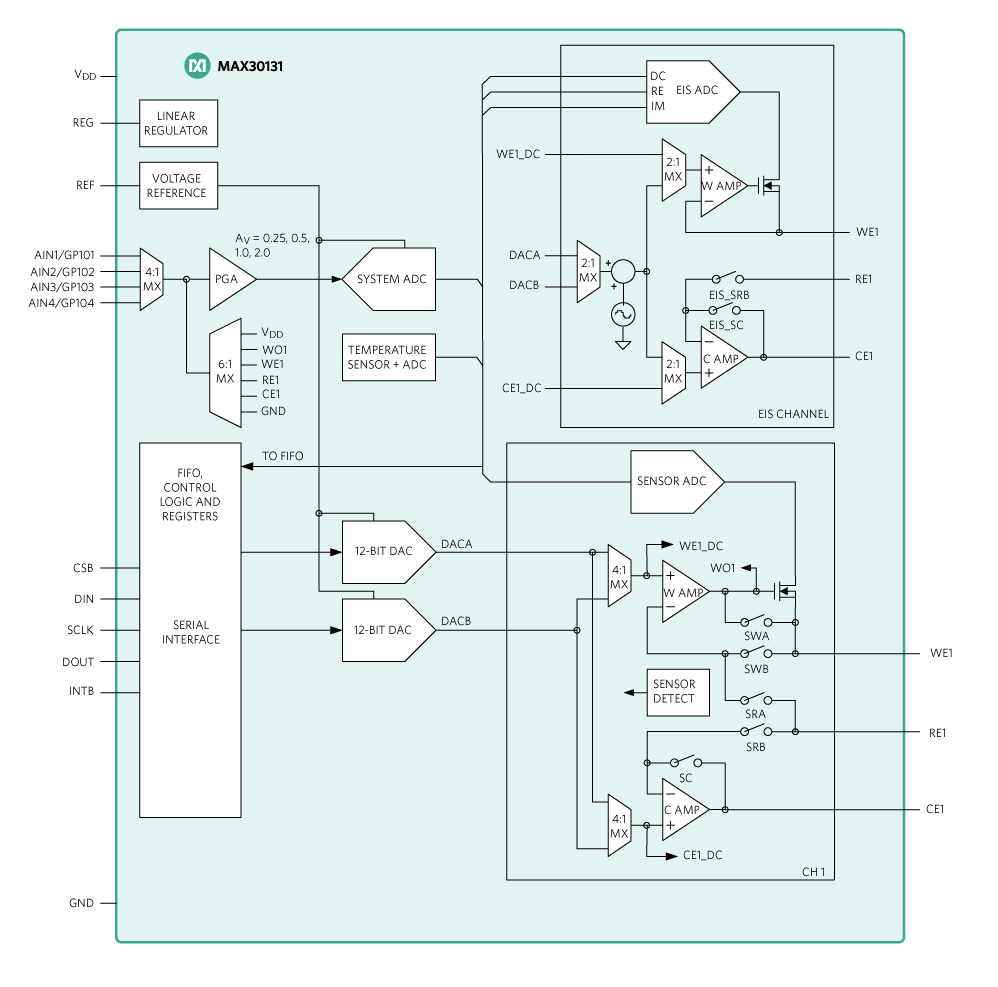 It is also available in two- (MAX30132) and four-DC (MAX30134) channel options. For applications that do not require all available channels, unused terminals can be configured as guard-rings (increasing accuracy by minimizing leakage currents) as shown in Figure 10. 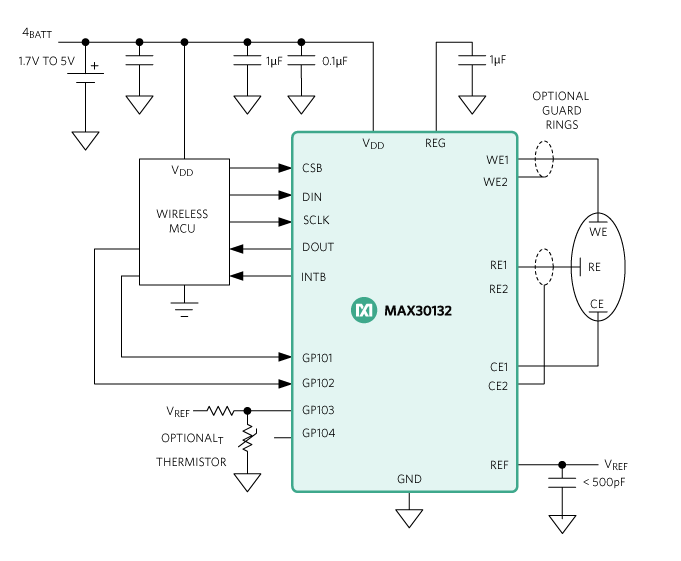 We have shown the importance of glucose monitoring in disease management for diabetes patients and demonstrated how CGMs greatly simplify this process when compared to BGMs. We showed that a CGM requires an electrochemical sensor AFE that can implement a measurement technique called EIS. Finally, we presented the smallest, lowest power electrochemical sensor AFE ICs (and variants) which provide this feature. With a range of additional safety features, these parts are also suitable for use in other wearable electrochemical sensing applications (e.g. sweat sensors).