Guideline on implementing temperature foldback with MAX25510, MAX25511 and MAX25512 using an NTC

This application note explains how to correctly size the circuit through an NTC thermistor external to the MAX25510, MAX25511, and MAX25512 LED Backlight driver so that it can perform a temperature control on the LED current until it switches off if the temperature is above the desired threshold.

The MAX25510, MAX25511, and MAX25512 are 4-channel, white-LED backlight drivers with an integrated current-mode boost converter that operate over a switching frequency range from 400kHz to 2.2MHz and incorporate a spread spectrum.

These devices can implement LED current reduction at high temperatures using an NTC temperature sensor to GND with resistors from the NTC to TEMP and to V18. The purpose of this application note is to provide information to assist in the selection of the external components for thermal foldback.

The temperature foldback current control system helps to prevent damage to the display system due to high temperature.

Note: If the function described is not necessary and therefore unused, connect TEMP to V18.

First, it's necessary to decide the temperature T1 from which the current reduction in the LEDs must be activated and a TOFF temperature from which the switch-off is required. At this point, choose an NTC suitable for the application, having a known characteristic and as linear as possible in the required temperature range.

In the MAX25512, when the temperature is approaching T1, the over temperature warning (OTW) bit in register DIAG_REG is asserted.

In all devices when the temperature reaches TOFF, the LED current is turned off, and the FLTB pin asserts low. In the MAX25512, the over temperature (OT) bit in register DIAG_REG is asserted. 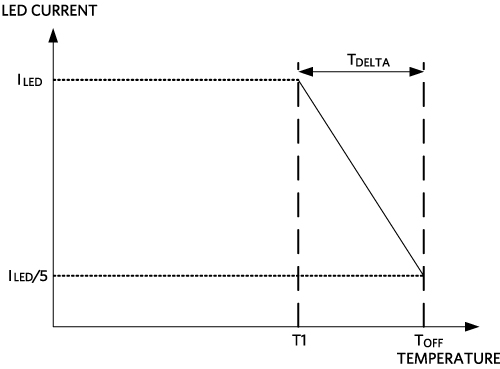 How to choose an NTC thermistor

An NTC thermistor decreases its resistance when the temperature increases with a characteristic that, in the first order, follows this law:

The following NTC thermistor parameters can be found in the manufacturer's data sheet:

Sometimes, the manufacturer directly provides the standardized R/T characteristics of the minimum, typical and maximum values of the NTC considering both the effect of the resistance tolerance and the tolerance of the Beta constant. In this application note, only the nominal value is considered. 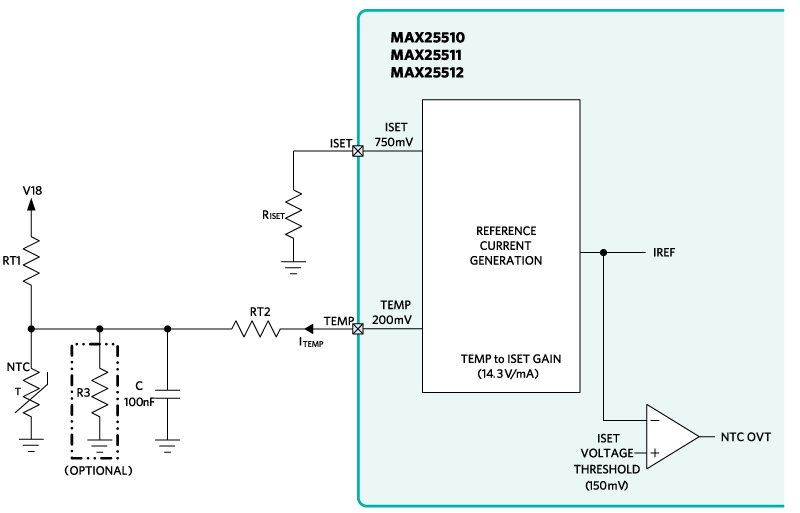 When an NTC temperature sensor is connected between GND and a resistor (RT1) connected to the V18 supply, with a further resistor (RT2) connected from the junction of the NTC and RT1 to the TEMP pin, a temperature foldback is implemented. The resistor R3 is optional.

When the voltage at the TEMP pin reaches 200mV, a current foldback begins. The value of RT1 together with the resistance of the NTC at temperature T1 set this threshold. Select RT1 according to:

The current in the LEDs is reduced according to the linear scheme shown in Figure 1. For temperatures greater than T1, ITEMP increases and is given by the equation:

up to the switch-off temperature TOFF, such that:

The slope of the current reduction is nominally set by RT2, such that:

Where, RNTCTOFF is the NTC resistor value at temperature TOFF.

The nearest standard value is 20kΩ.

Using the equation for RT2, we can calculate its value knowing that the NTC resistance is 677Ω at 100°C. The equation becomes:

And the calculated value is 2707Ω, the nearest standard value being 2700Ω.

Table 2 shows some further examples of values of RT1 and RT2 to obtain certain values of T1 and TOFF with NTCLE100E3103*B0 as NTC. 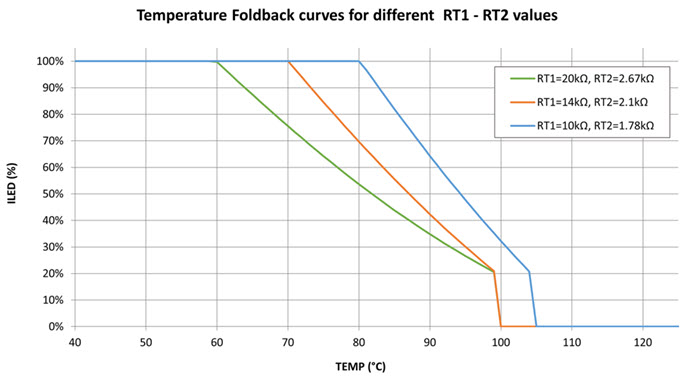 If a linear curve is required for measurements over a temperature range, a series-connected or a paralleled resistors are quite useful.

If correctly sized, the paralleled resistor R3 (optional in Figure 2) can help to adjust the characteristic of the chosen NTC thermistor.

Replacing RNTCT1 with (RNTCT1|| R3) and RNTCTOFF with (RNTCTOFF|| R3) in the previous equations, a degree of freedom is introduced to tune the value of the equivalent resistance such that 8(RNTCT1|| R3) matches an available RT1 value.