This application note gives an overview about two different ways to adjust the current in LED backlight driver devices. The case of MAX25510 and MAX25511, which allow for a combination of the two methods, is addressed in detail.

This application note describes different ways of applying a dimming signal to Backlight High Brightness LED drivers. Specifically, the MAX25510 and MAX25511 are standalone peak current-mode controlled LED drivers which can drive up to four LED strings; each of the four integrated current outputs sink up to 120mA and the LED current value is continuously adjustable using true pulse-width modulation (PWM) dimming, analog dimming, or a combination of the two which is called hybrid dimming.

True PWM and analog dimming functions are activated by injecting a square wave signal with the proper frequency and the desired duty cycle into the DIM and ADIM pins, respectively, of the earlier introduced devices. Hybrid dimming represents the union of the previous two methods and can help reduce electromagnetic interference (EMI), increase the dimming ratio, and reduce the audio noise in the application.

A brief description highlighting the benefits and drawbacks of PWM dimming, analog dimming, and hybrid dimming is given in the following paragraphs

True PWM dimming forces the LEDs to turn on and off following the dimming signal's programmed frequency and duty cycle. Since the LED peak current is kept constant across the entire dimming range, there is no shift in color temperature and very low minimum brightness levels are achievable without incurring in large errors in the light output.

This approach is weaker at high brightness regimes, where the efficiency vs. load current is affected by higher conduction losses from the resistive elements of the circuit when the LED current is on. Also, considerable switching noise is generated at the output if ceramic capacitors are used; this results in acoustic noise if the frequency of the PWM signal is within the audible range (refer to Application Note 7060: How to Reduce PWM-Related Acoustic Noise on MAX20444 Applications for a list of ways to reduce the audio noise).

The MAX25510 and MAX25511 track the external PWM dimming input on DIM pin and can provide output pulses with a minimum on-time of 300ns. The PWM dimming frequency can be in the range from 100Hz to a value which is not too penalizing for the dimming ratio.

Analog PWM dimming involves taking a PWM input and converting it to an analog control signal. The LED peak current value is linearly reduced by a factor depending on the duty cycle of the applied signal.

This dimming approach is beneficial from the point of view of noise reduction as the LED current is always continuous, and any possibility of acoustic noise arising from output ceramic capacitors' vibrations at high brightness is eliminated. Efficiency vs. load current is improved at lower brightness levels because of lower conduction losses.

On the other hand, the minimum brightness level is limited by the non-linearity of LEDs when these are purely current-controlled. For this reason, very small current values cannot be provided without losing resolution.

The MAX25510 and MAX25511 implement the analog dimming function described above by accepting at the ADIM pin a square wave signal (10kHz–100kHz frequency range) with variable duty cycle. Figure 2 shows the relationship between ADIM setting and LED current (0% duty cycle corresponds to the maximum LED current). The ADIM signal is internally converted to an 8-bit word, which translates into 256 brightness levels. 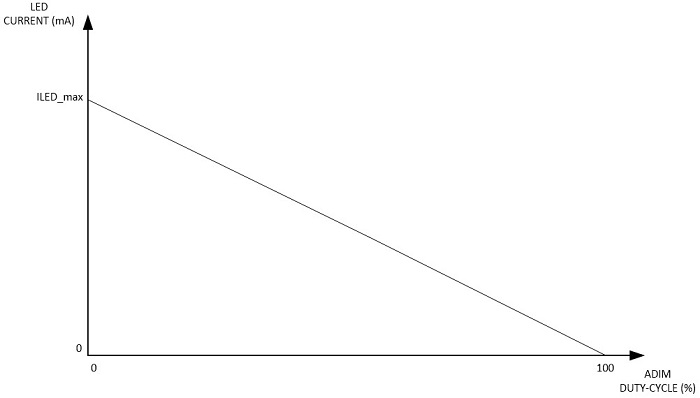 Hybrid dimming combines the benefits of both analog and PWM dimming by breaking the LED current control in two parts. In particular, the advantages of hybrid dimming are as follows:

In the high brightness region, the LED current is linearly varied between the maximum display brightness level and a pre-set current threshold. Below this threshold, PWM dimming allows to keep the same pre-set peak current while modulating the signal's duty cycle to control brightness.

A generic hybrid dimming case applied to MAX25510 and MAX25511 is displayed in Figure 3. The transition from analog dimming to PWM dimming happens when the maximum LED current is reduced by a factor "X" and the analog dimming duty cycle is increased by a factor "100*(X-1)/X" correspondingly. Before the transition, the PWM dimming's duty cycle is kept at 100% while it can take any value between 100% and 0% after the transition. 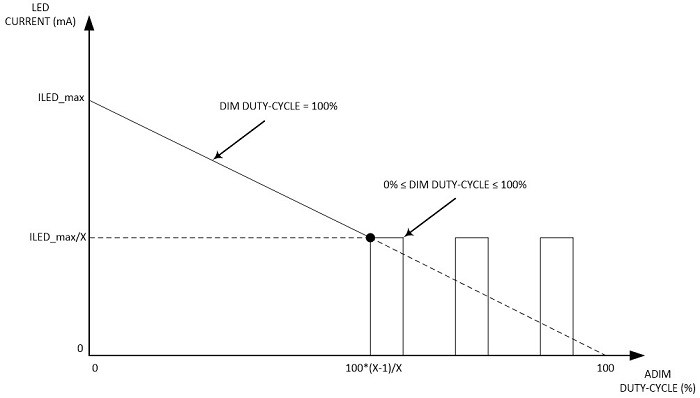 Hybrid dimming can be implemented on the MAX25510 and MAX25511 using the DIM and ADIM inputs simultaneously. Two different PWM signals are needed: one which controls the standard PWM dimming (connected to DIM pin) and a second one which is connected to ADIM pin and sets the peak LED current from 0% to 100%.

For the following example use case, a MAX25512 EV Kit with a MAX25511 IC mounted on demonstrate the hybrid dimming operation. A maximum LED current per string of 100mA is linearly decreased to 33mA by applying a 10kHz square wave signal to the ADIM pin with duty cycle from 0% to 67% while keeping a 1kHz-100% duty cycle square wave signal on the DIM pin. When the 33mA breakpoint level is reached, the duty cycle of the signal on DIM is reduced to control the LED brightness through PWM dimming.

Figure 4 shows the MAX25511 operating circuit with the actual external component values. The device is configured with phase-shift feature disabled.

The results of the bench test performed on the EV kit are presented in the following scope-shots (Figures 5 to 8) which show the different stages of the transition process between analog dimming and PWM dimming. 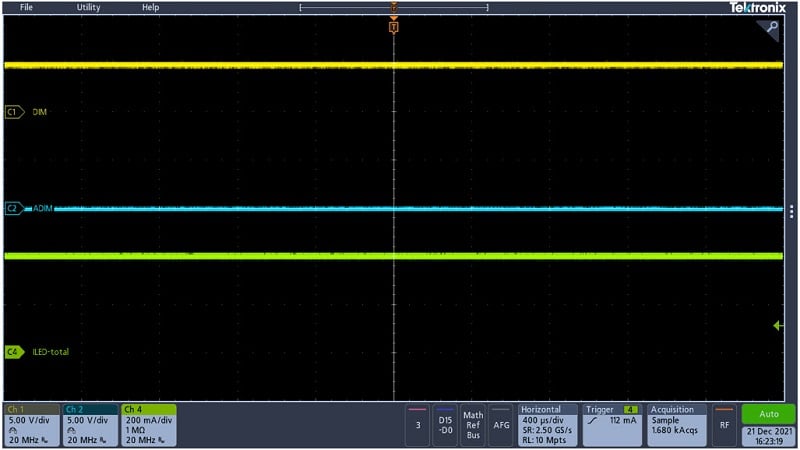 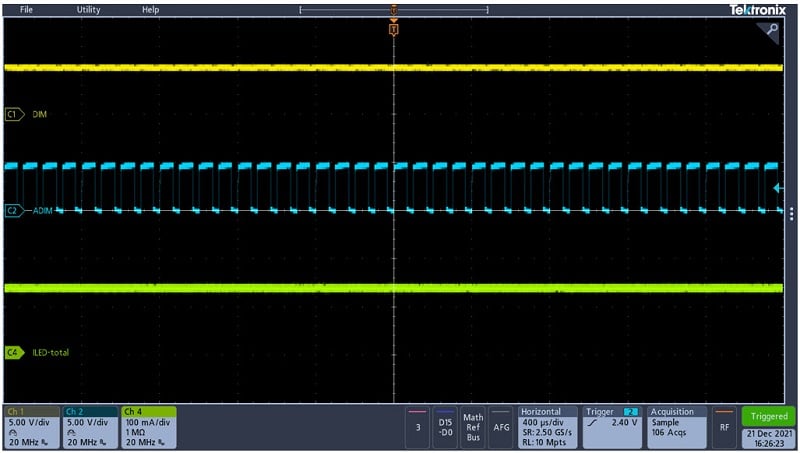 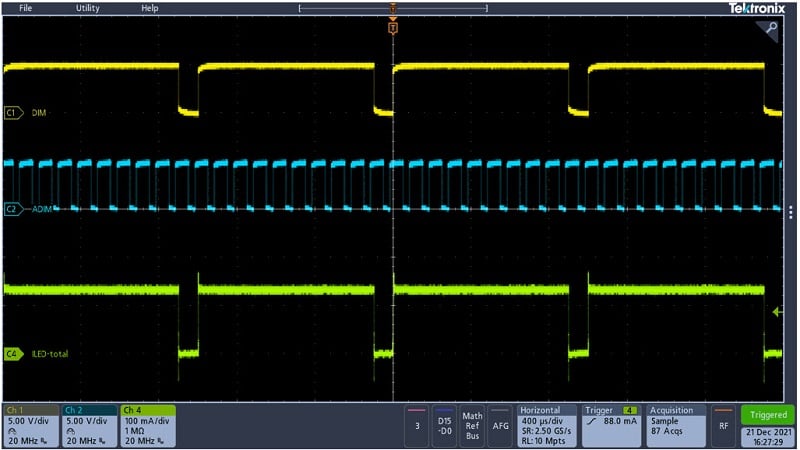 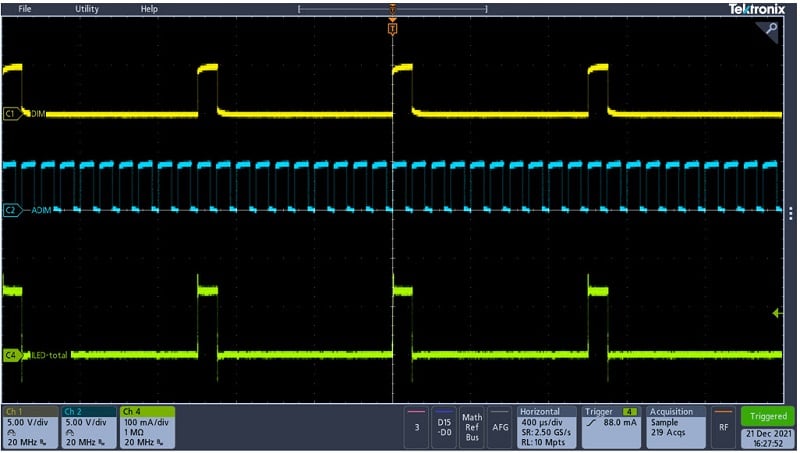 The relative LED brightness variations resulting from ADIM and DIM settings in the earlier use case are summarized in Table 1.

The purpose of this application note is to give an overview of the three major categories of PWM dimming used in backlight LED drivers and to describe how the MAX25510 and MAX25511 can control the LED current through both true PWM dimming and analog dimming signals at dedicated pins. By taking advantage of this architecture, a mix of the two dimming approaches, which leads to hybrid dimming, can be obtained.