/
Using the DS2488 for Linking in True Wireless Stereo (TWS)

Using the DS2488 for Linking in True Wireless Stereo (TWS)

For a true wireless stereo (TWS) system, the two-contact interface technology of the DS2488 solves power switching and data transfer between the earbuds and charging box. This simple, cost-efficient device provides many benefits over other TWS solutions. This application note provides a more in-depth understanding of these benefits.

Many true wireless stereo (TWS) Bluetooth® earbuds are provided with a protective enclosure equipped with contacts for charging and communication. The small form factor of the DS2488 allows both the earbuds and contacts to be compact. The contacts provide charging and allow two-way communication to retrieve device information, which can be used for servicing. The DS2488 provides a great way to link the charging box to the Bluetooth earbuds. This link provides the earbuds with valuable status information that can be delivered to the smartphone over Bluetooth. The DS2488 is competitively priced for the TWS segment. This application note describes the TWS features and the usage with the DS2488.

Three devices interact in a TWS system: the charging box, earbuds, and smartphone. For reasons just discussed, a two-contact solution is usually required between the charging box and earbuds. Customers want to know the status of their earbuds such as the amount of charge left, how much charging remains in the box, and whether the earbuds are in the enclosure. This information is relayed via Bluetooth from the earbuds to the smartphone. Additionally, the charge box should know if the stored earbuds' batteries are depleted to know when to enable charging or to stay in a low-power mode. The charge box (i.e., an earbud enclosure) typically uses a large lithium-ion (Li+) battery to charge the smaller battery in the earbuds. An enclosure can replenish earbuds numerous times when fully charged. When the charge box battery is exhausted, the earbuds can pass that information to the smartphone. Earbud identification information is often provided, which enables the smartphone to know that the earbuds are genuine. By waking the earbuds from sleep when the charge box lid is opened, the Bluetooth connection is initiated early, providing a better user experience.

Flexible installation of firmware ensures that customers receive their product with the latest features and bug fixes. Typically, the charge box is updated through its USB port, which then installs the firmware to itself or to physically connected earbuds. Alternatively, firmware updates to the charge box can be delivered through earbuds via a Bluetooth connection. The earbuds must allow large amounts of data to pass from the internet-connected smartphone to the charge box during a scheduled update.

The aforementioned TWS features can be achieved due to the small size of the DS2488's WLP package (1.6mm x 0.9mm x 0.33mm). The DS2488 is a two-contact interface technology that solves power and data transfer between the earbuds and charging box. Separate DS2488 devices reside in each of the earbuds and use Maxim's 1-Wire® protocol for information exchange while being interleaved with charge power. The DS2488 has dual links called IOA and IOB. The IOA link can harvest power from the charge box, allowing device functionality over 1-Wire even if the earbud's battery is depleted. A second 1-Wire link, IOB, passes information to the earbud's Bluetooth SoC as needed. The two 1-Wire links share an 8-byte buffer to pass small messages.

Earbuds in the Charge Box

As mentioned, the charge box can detect if the earbuds are inserted, even when their batteries are depleted. The charge box can request the DS2488's unique 64-bit ROM ID through the 1-Wire IOA link because the device is parasitically powered from this connection, as seen in Figure 1. Once detected, interleaving 1-Wire communication and charger power gating is enabled by voltage detection on IOA. After ~1.5ms of the first power-up, if the DS2488 detects IOA above 4V, then battery-charging mode will be enabled. During normal usage, the charge box toggles as needed between charging and communication by setting IOA to different voltage levels. To enter charger mode, have the charger box pull down IOA to ground for the timeout value (the default is 25.6ms), then pull up IOA above 4V. To exit charger mode, simply pull down IOA below 4V. When the box is not charging, it can send and receive messages through the IOA 1-Wire interface. Using this method, 'box/earbud battery levels' or 'lid not closed properly' messages can be passed to the earbuds and on to the smartphone. Earbuds with sufficient charge can detect if the charge box battery is depleted and notify the user that it needs recharging through a phone application.

Performing Linking between IOA and IOB

Arbitration between IOA and IOB links is realized by the state machine shown in Figure 1 of the DS2488 data sheet. The arbitration is determined by using the different states: charging state, IOA 1-Wire operation, and IOB 1-Wire operation. Other states provide additional features which will be discussed later. Primarily, the charging state is used for both charging and IOB 1-Wire operation, while the IOA 1-Wire operation state is used when charging is briefly turned off for interleaving the communication from the charge box to the earbuds. Figures 2 and 3 show examples of the operations between the charge box and earbuds. The charge box controls the amount of time allocated (i.e., charging increment) for charging. While the charging increment is occurring, the earbuds can send and receive small messages through the 8-byte buffer. Otherwise, the DS2488 is accessible from the charge box that sends/receives messages to/from the same 8-byte buffer. By doing so, a constant data exchange can occur, providing valuable status information. 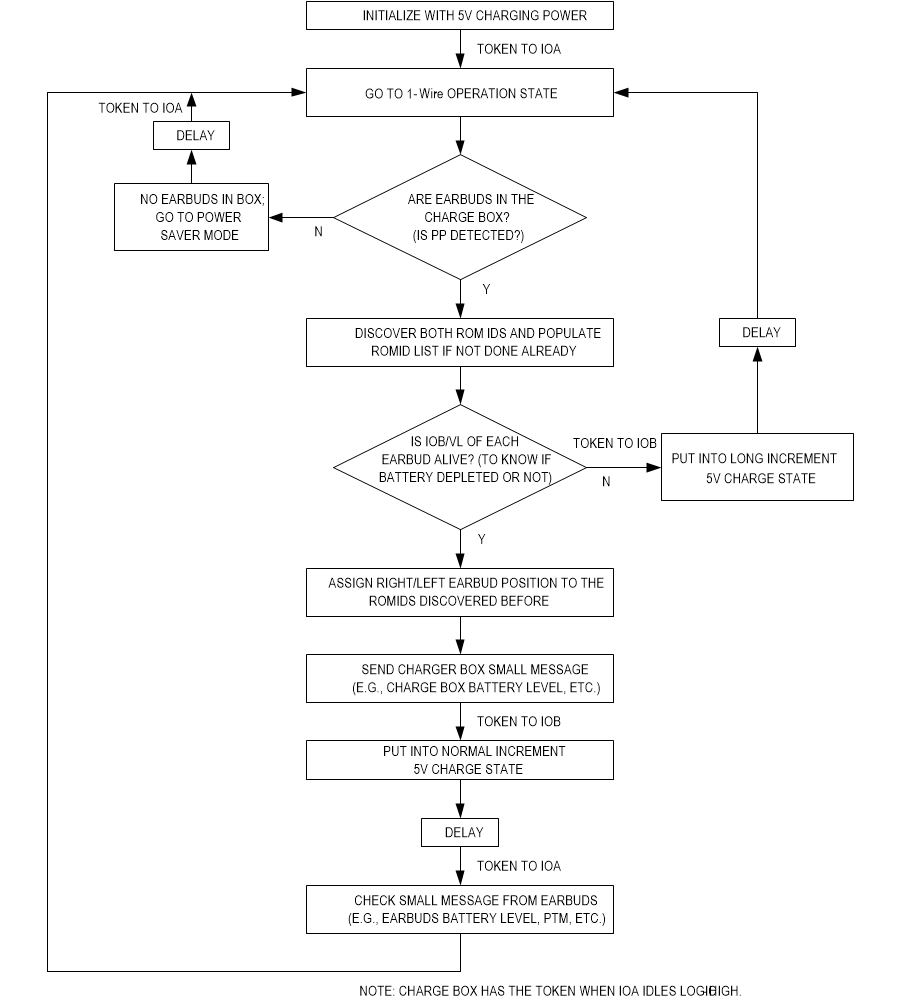 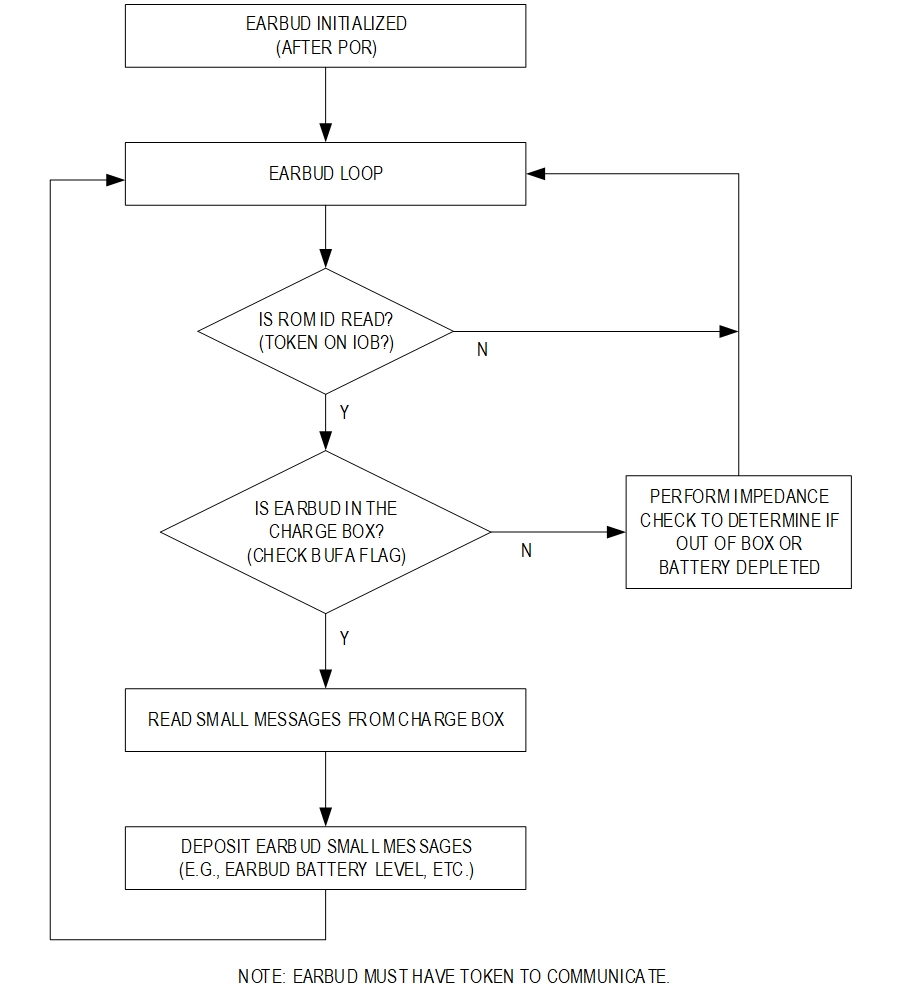 Earbuds Out of the Charge Box 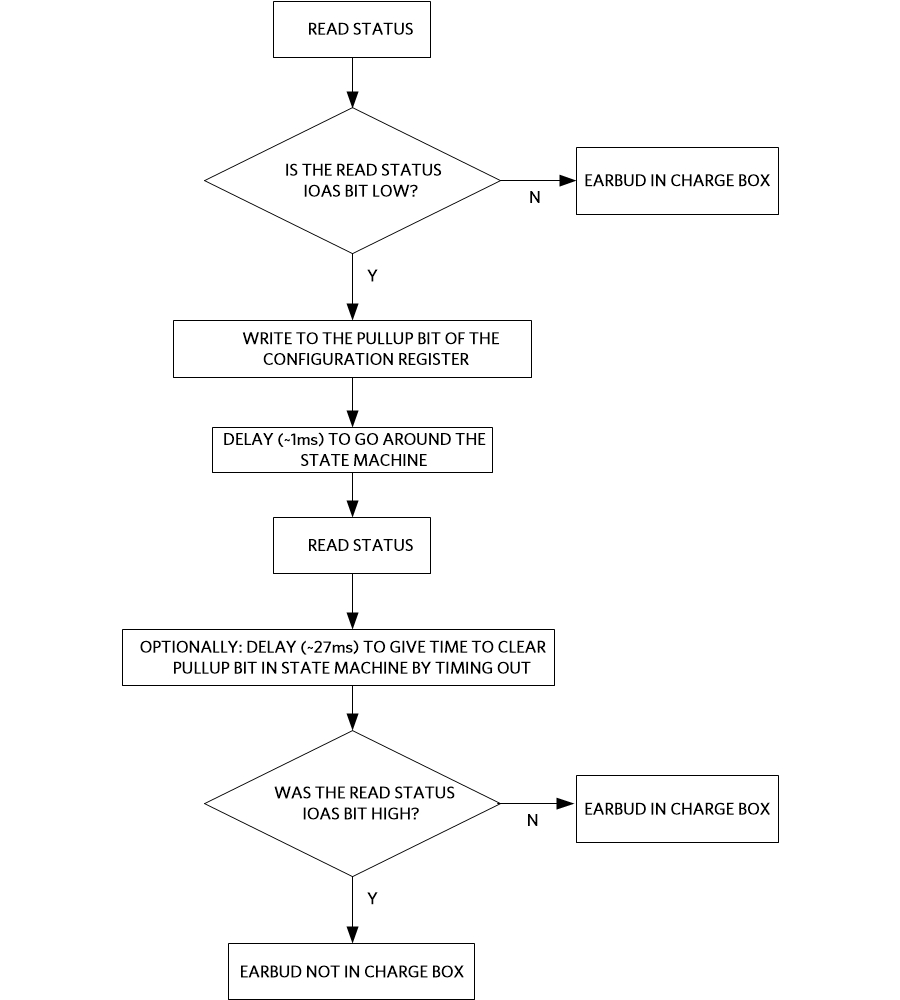 A detailed example of configuring PTM is shown in Figure 5. This mode enables the charging box to deliver firmware to an earbud during manufacturing. Updating the charging box would be similar, except the UART data would be coming from the earbud. First, switch off charging power to begin the steps in Figure 5. When selecting the left or right earbud, the 1-Wire Match Rom command must be used so the earbuds can be selected separately. PTM remains active as long as the UART data traffic continues to flow before DS2488's timer expires. If the timer expires before completing the entire UART data transfer, then the PTM configuration must be performed again. 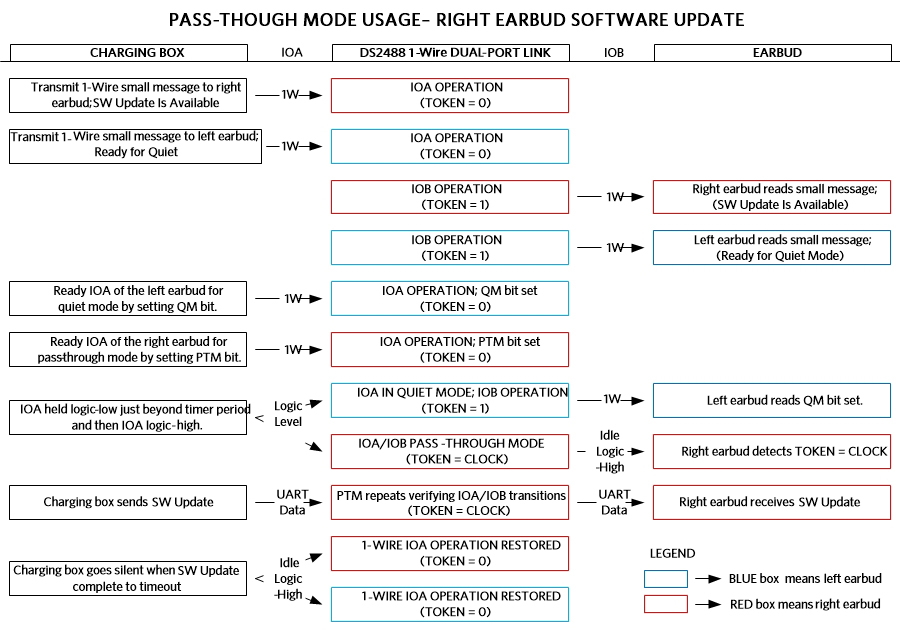 The DS2488 works as an excellent TWS solution for bridging information exchange and special features between a charge box and earbuds. This simple, cost-efficient device provides many benefits over other TWS solutions. The usage examples provide a more in-depth understanding of these benefits.