This application note explains how to generate a negative voltage from positive input voltage using MAX17291 for applications, such as LCD displays, gate drivers, etc. It also includes information on implementing the active discharge feature.

The MAX17291 is a low quiescent current boost (step-up) DC-DC converter with a 1A peak inductor current limit and True Shutdown™. True Shutdown disconnects the output from the input with no forward or reverse current. The output voltage is set with an external resistor-divider. The MAX17291 IC can operate from 1.8V to 5.5V input supply and can output up to 20V. 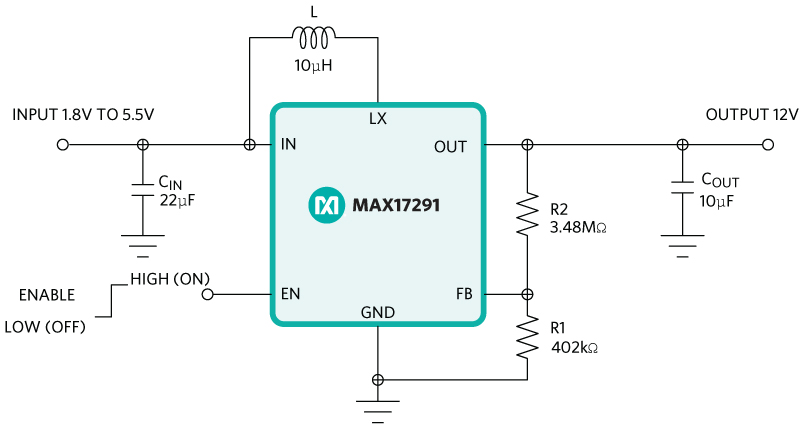 A boost converter circuit for 1.8V to 5.5V input and 12V output voltage using MAX17291 IC is shown in Figure 2. The MAX17291 boost converter has two modes of operation, light load efficiency and pulse-width-modulated (PWM). In light load mode, it operates in pulse frequency modulation (PFM) to improve efficiency at light loads. In this mode, the on-time is determined by a peak inductor current limit of 500mA. Once the inductor current hits its limit, the on-time is terminated, and the power diode is forward-biased. In PWM mode, the converter uses a quasi-constant 1.0MHz switching frequency pulse width modulation (PWM) at load current levels in continuous-conduction mode (CCM). Based on the input voltage to output voltage ratio, the circuit predicts the required off-time. In CCM mode, the duty of the boost converter is given by the following equation. 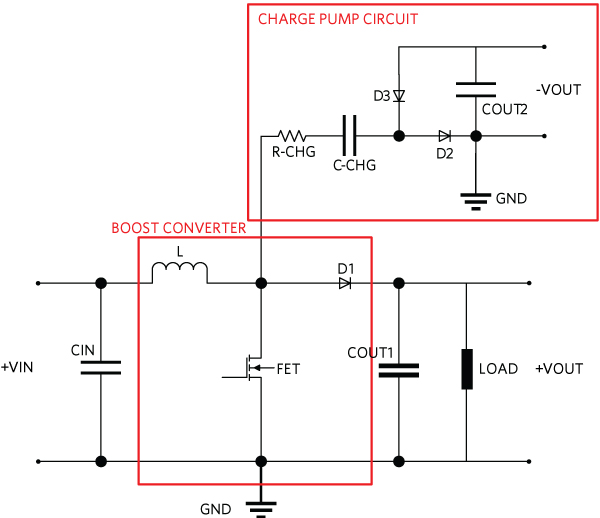 Figure 3. Schematic of the negative voltage using the boost converter.

The current starts flowing from inductor to COUT1 via diode D1 and from inductor to C-CHG via R-CHG and diode D2. The capacitors, COUT1 and C_CHG, are charged during this time. The voltage across the C-CHG is given by the following equation.

The current flow during Q1 OFF state is shown in Figure 4. 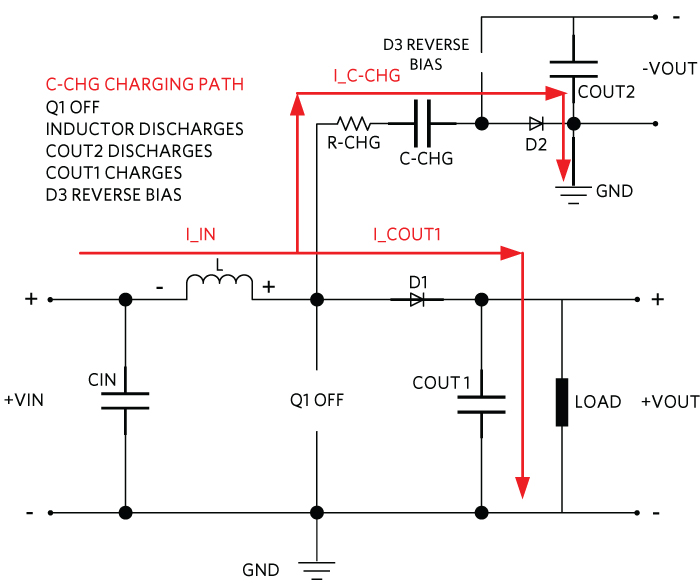 At the end of the Q1 OFF time, when the Q1 becomes ON, the drain terminal of Q1 is pulled almost to ground. The diode D2 becomes reverse biased and diode D3 becomes forward biased. Once diode D3 becomes forward biased, the current starts flowing from the COUT2 capacitor via R-CHG and diode D3. This appears to lead to a negative voltage on the capacitor COUT2 with respect to ground.

The voltage across COUT2 is given by the following equation.

The current flow during Q1 ON state is shown in Figure 5. 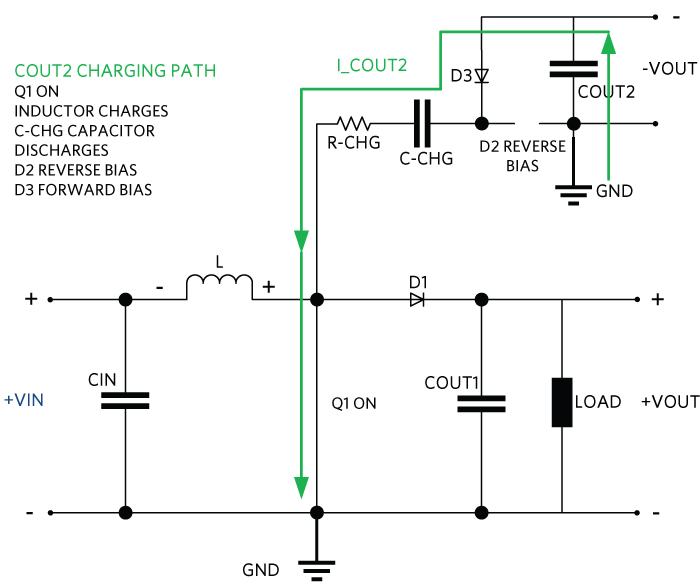 The MAX17291 boost converter IC has an internal boost MOSFET, diode, and control circuit. A charge pump circuit is connected to the LX switching node of MAX17291 IC to generate a negative voltage. The schematic of negative voltage using MAX17291 IC is shown in Figure 6. 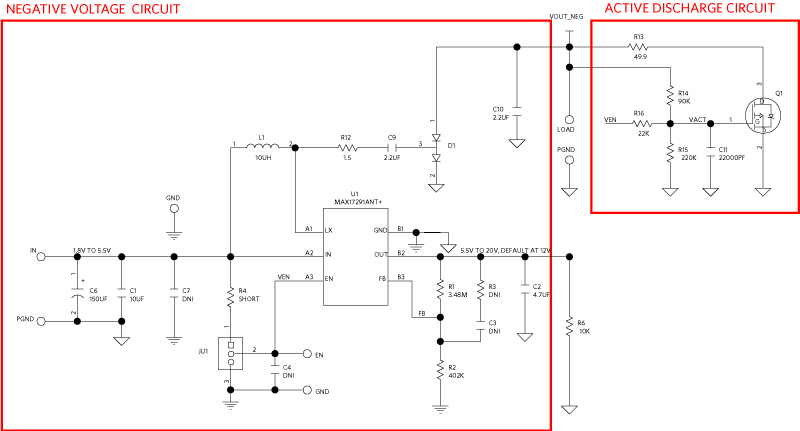 The load regulation and efficiency performance of the circuit is shown in the graphs below. 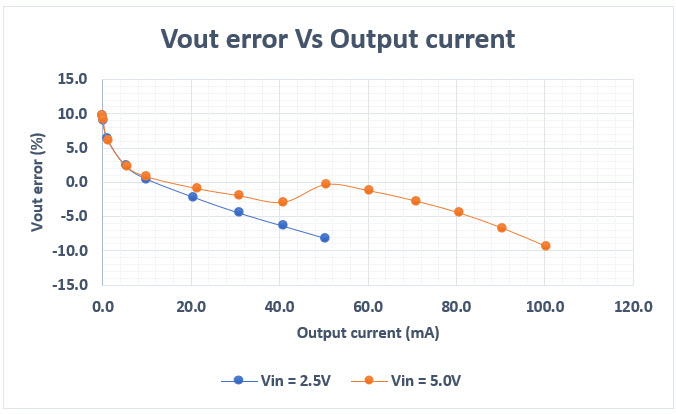 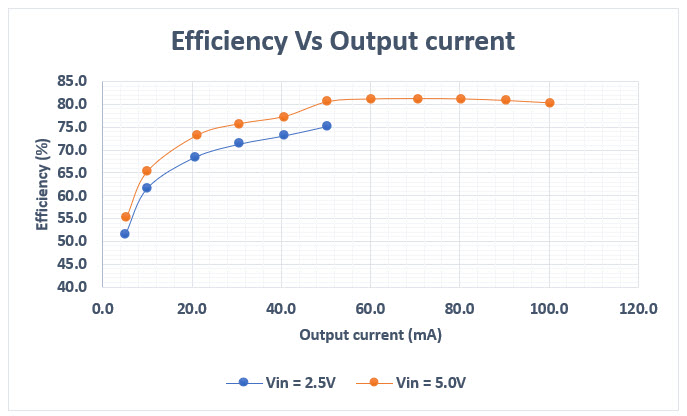 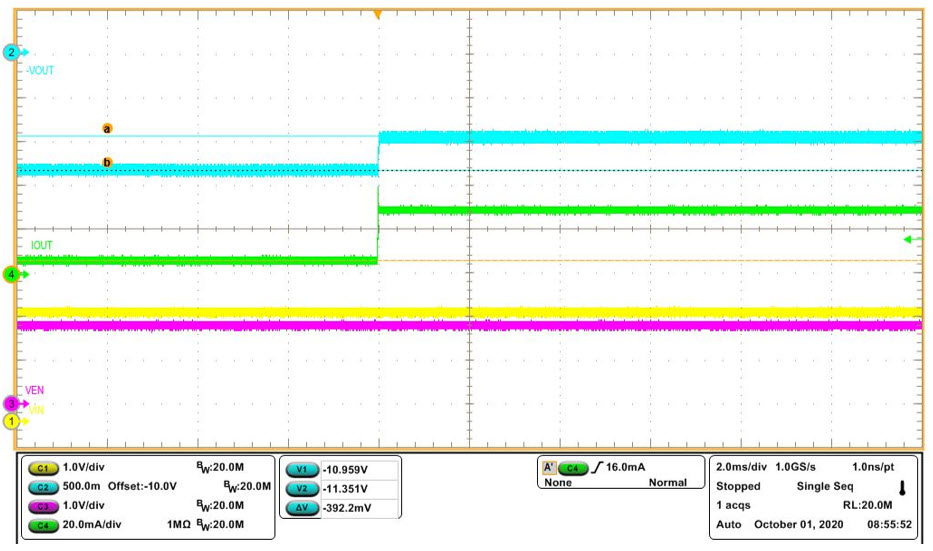 Due to load transient, the voltage change is approximately ~392mV (3.56%). Output voltage is offset by -10V in the waveform. 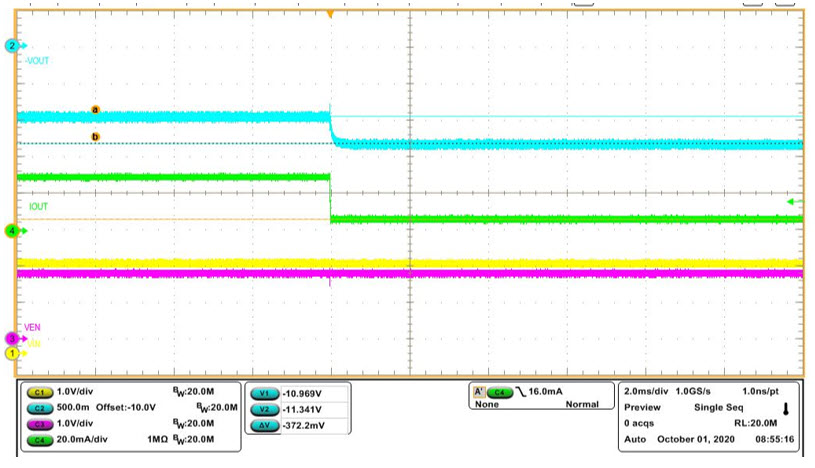 Due to load transient, the voltage change is approximately ~370mV (3.36%). Output voltage is offset by -10V in the waveform. 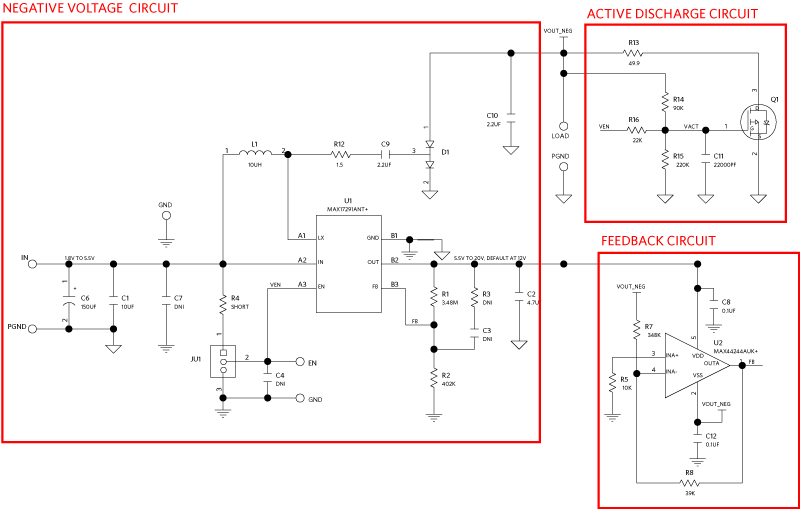 The following are representations of load regulation and transient performance of negative voltage using an op-amp circuit. 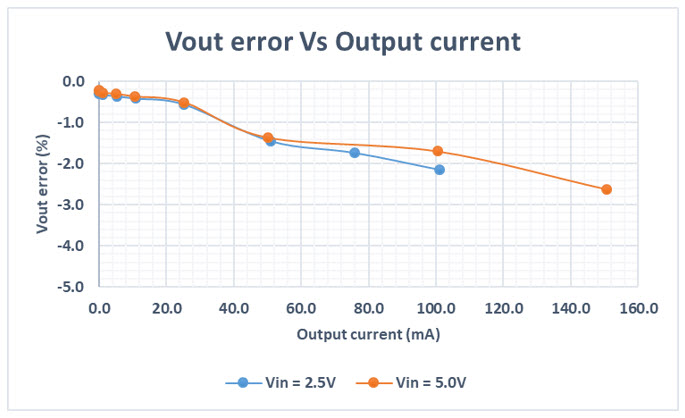 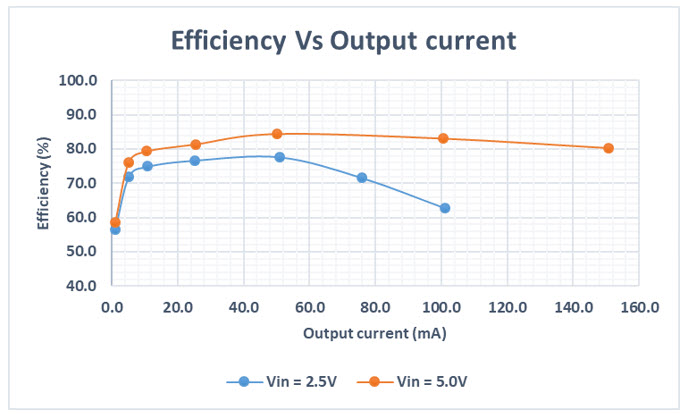 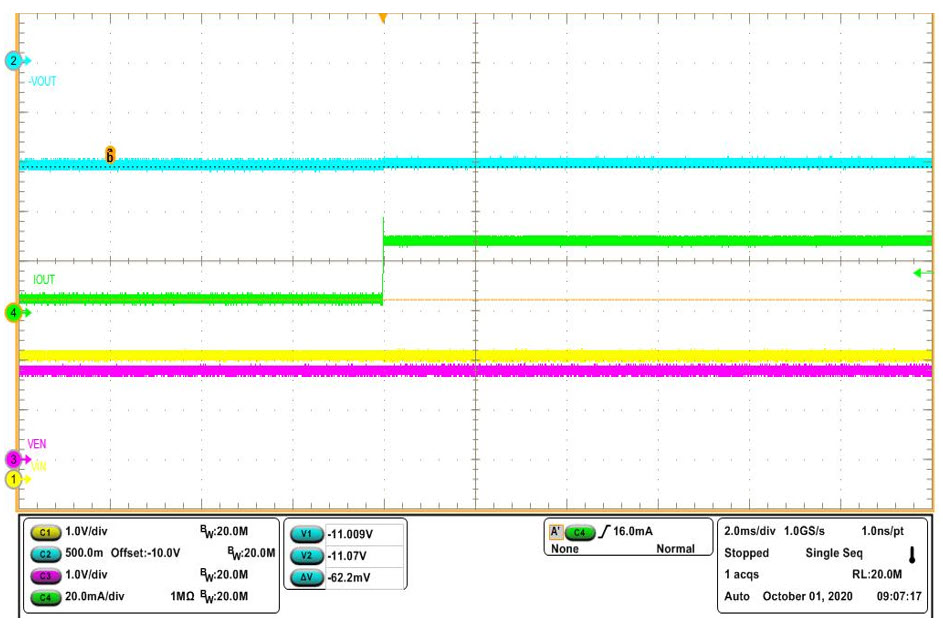 The voltage change due to load transient is around ~62mV (0.56%). Output voltage is offset by -10V in the waveform. 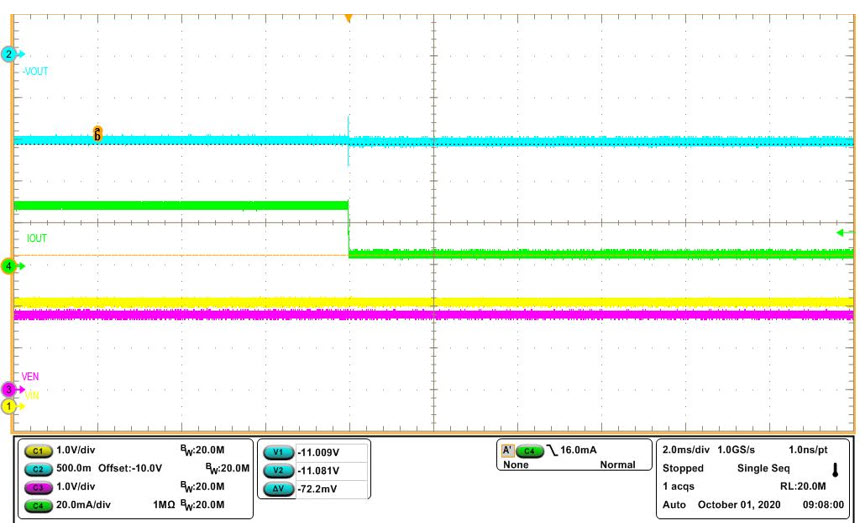 The voltage change due to load transient is around ~72mV (0.65%). Output voltage is offset by -10V in the waveform.

As shown in Figures 7–15, the negative voltage circuit using op-amp has very tight regulation and good transient performance compared to a circuit without op-amp.

Based on the above results, the negative voltage solution with op-amp has good load regulation and efficiency performance. 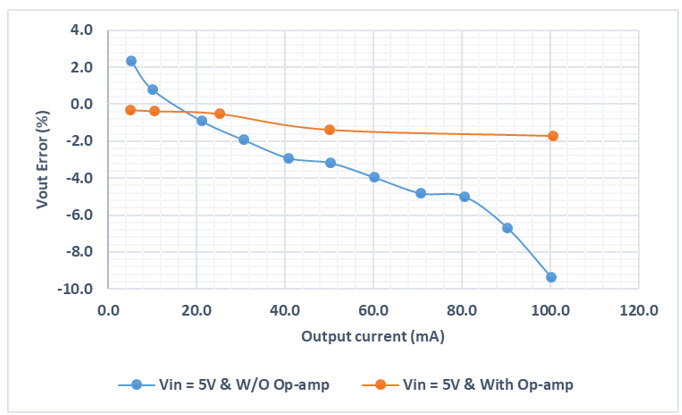 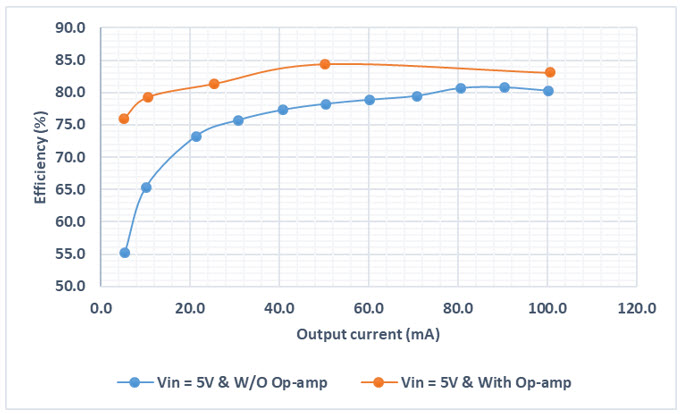 In Figure 11, the active discharge circuit is composed of resistors R13 to R16, capacitor C11, and P-MOS Q1. When the IC is disabled using the EN pin (EN = 0V), the resistors R15 and R16 become parallel, and the voltage Vgs of Q1 is more than the threshold voltage. Hence, the MOSFET Q1 turns ON. The active discharge feature pulls the whole charge, which is accumulated by the COUT2 capacitor, and dumps into the resistor R13. The negative voltage is immediately reduced to a lesser value. When the IC is enabled, the voltage across gate and source is less than the threshold value, and MOSFET Q1 turns OFF. The value of discharge resistor can be chosen based on the required discharge time of the COUT2 capacitor.

The operation of active discharge is shown in the following waveform. 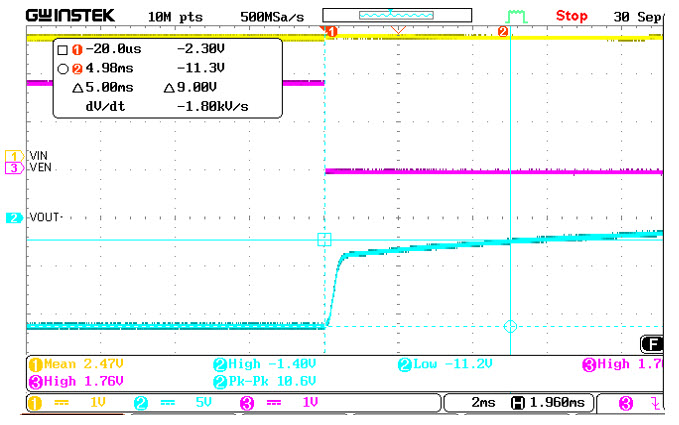