Measuring the Efficiency of a Multiphase Buck Converter Integrated Circuit

Measuring the efficiency of a multiphase DC-DC converter can be tricky. Layout imbalances lead to voltage differences between each of the phases. Engineers must carefully consider how they are measuring input and output voltages and currents when evaluating these converters to arrive at the correct number. This application note explores the nuances of multiphase buck (step-down) converters and offers a method for properly measuring efficiency

Calculate the efficiency of any DC-DC converter with the following equation:

In a single-phase buck converter, there is only one power stage and one output; hence, one point to measure at. In a multiphase buck converter, there are multiple outputs that are connected electrically. Take a four-phase buck for example: a four-phase buck needs four inductors (one for each phase), at least four output capacitors (one or more for each phase), and connects the outputs of the four individual phases together. Which output voltage should be measured to calculate POUT? It is logical to assume that the output voltages of all four phases are identical, but not entirely true. They are only identical when measured when they meet at a single point on the board. PCB impedances cause voltage drops along the output trace of each phase as it routes from the switching node pins of the IC to the load. A good, symmetric layout will minimize this impact. Layout asymmetries, however, can lead to imbalances in the outputs of the buck. For example, if the copper trace from the first phase to the load is shorter than the trace from the fourth phase to the load, the voltage generated at the pin of the first phase will be lower than the voltage generated at the pin of the fourth output (they must be equal at the point of load, and the fourth phase will incur more voltage drops). This is significant for the calculation of efficiency as mentioned earlier. In this scenario, measuring only the first output voltage and assuming the other phases are the same will give a number that is lower than the real efficiency! The buck is generating a higher output voltage at the fourth phase, and assuming load current is equal between the four phases, means the fourth phase is generating more power than accounted for. Note that this process can also happen in reverse; a higher-than-real efficiency can be measured too. Thus, the perceived efficiency in a multiphase buck converter is dependent on the method of measurement. Take an exaggerated example to illustrate this point. 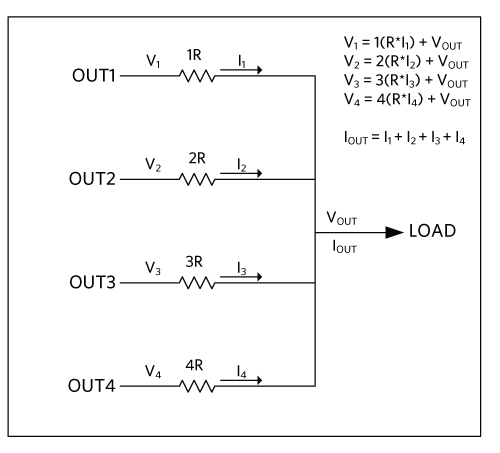 Figure 1 depicts an exaggerated case of imbalanced routing of a four-phase buck. Note that the inductor (L) and output cap (C) of each phase are not pictured in Figure 1 but do exist. OUTx are the nodes of the output caps on the IC, and VX are the voltages generated directly at those capacitors (where x is one of the four phases). VOUT is to the point-of-load voltage, and IOUT is to the total output current drawn by the load. Imagine a PCB where the length of the OUT4 trace to the load is four times longer than the length of the OUT1 trace. Assume that the extra length contributes four times the resistance as the first phase (4R vs 1R). Using this example, see how the imbalanced layout and loading can potentially cause errors in calculating efficiency:

Observe that the voltages generated by the buck converter directly at the output caps must be higher than VOUT to compensate for the drops along the PCB paths. Phase one only has a (1 × R) drop, but phase four has a (4 × R) drop.

In a real lab, the engineer tasked with calculating efficiency for this multiphase buck needs to measure four quantities: VIN, VOUT, IIN, and IOUT. Input voltage and current are simple enough; there is only one input source to the converter, therefore one place to attach a voltmeter and one place to insert an ammeter. Output current is simple; one ammeter between the load and the output of the buck. Output voltage, however, might be a bit trickier. If the engineer attaches the voltmeter at the point of load and reads VOUT = 1.0V, they automatically include the PCB losses from the local output caps to the point of load and calculate an incorrect efficiency. Typically, Maxim Integrated EV Kits come with kelvin sense test points to help engineers avoid that difficulty.

Assuming that the output current is shared evenly between the four phases at 1A per phase (assume the buck converter has a good current sharing loop), calculate the output power of each phase, and then the total output power if the other phases are assumed to be generating the same voltage:

Find the actual output power by measuring each phase individually:

There is a fixed input power required by the buck for this condition. Assume that input power is 5W (just a contrived number). Use the actual output power to calculate the efficiency of the device:

This example is contrived to illustrate the point, but the theory stands. See the following experiment with the MAX77711 quad-phase buck converter to test this theory in a real-world IC.

Consider this hypothesis: in a multiphase buck converter, the most accurate efficiency can be obtained by individually measuring the power delivered by each phase and summing them to exclude all PCB losses, and get the correct output power to be used in the efficiency calculation.

The theory states that perceived efficiency can be lower or higher than the true efficiency depending on both the layout quality and the method of measurement. Measuring the output voltage of only one phase and assuming the same voltage for the others leads to a perceived converter efficiency that is incorrect (with the magnitude of error dependent on the quality of the layout). The hypothesis implies that measuring all output phases individually eliminates the error in the calculation.

In a configurable four-phase buck regulator like MAX77711, the EV Kit must allow for evaluation of all possible phase configurations. In doing so, the layout sacrifices some symmetry for configurability. This makes it a good candidate for testing the hypothesis. Consider an experiment with three main objectives: 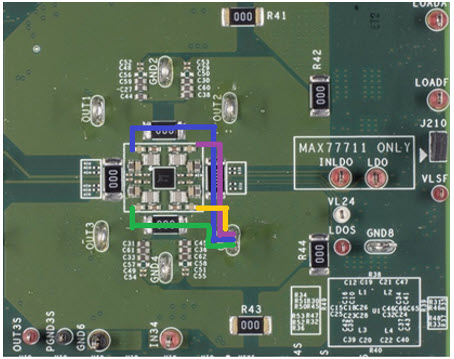 Refer to Figure 2, which shows the MAX77711 EV kit in a four-phase configuration (one output). To highlight the point made with Figure 1, note the varying lengths of traces that the current must flow through if the load is taken from the OUT4 terminal. Phase one (blue) takes the longest path, phases two and three (purple and green, respectively), take the second longest paths, and phase four (yellow) takes the shortest path. This means that OUT4 should see the least amount of PCB loss, and OUT1 should see the most.

There are 16 unique combinations of loading and measuring but focus on just a few to simplify the experiment. One set of combinations should be sufficient to prove or disprove the hypothesis. Attach a load at the OUT4 terminal and measure the output voltage at each of the four phases. Define the experiment as follows:

Measure IIN – Connect an ammeter between the power source and the input to the buck (SYS test point).

Measure VOUT – Connect a voltmeter across the output capacitor of phase x for output voltage (across kelvin sense test points OUTxS and PGNDxS, where x = 1, 2, 3, or 4).

Measure IOUT – Connect an ammeter between the output pin of phase 4 and an electronic load for output current (loaded at OUT4).

Use these numbers to calculate efficiency. Repeat the efficiency measurements for each value of x to test all combinations.

Refer to Figure 3 for a graph of the plotted efficiency data for each case. Since the load was taken from OUT4, it makes sense that the red curve (when VOUT is measured from OUT4 which generates the lowest voltage) has the lowest efficiency. Measuring VOUT from OUT4 does not consider the extra output power generated by the other phases to compensate for their PCB losses. Conversely, the purple curve (when VOUT is measured from OUT1 which generates the highest voltage) is the highest efficiency since it assumes that the other phases are generating more output power than they are. It is a little difficult to see, but the green and yellow curves (OUT2 and OUT3 VOUT measurements, respectively) are right on top of each other.

The blue curve shows that the real efficiency of the MAX77711 is somewhere between the red and purple boundaries. But measuring carelessly could produce an efficiency error of up to 3%!

The data shown in Figure 3 proves that the hypothesis is correct. Measuring efficiency of multiphase DC-DC converters requires careful placement of the measurement equipment. Asymmetric PCB layouts potentially lead to losses that might be accounted for during evaluation. The method for measuring the most accurate efficiency is to measure the output power of each phase individually and sum them to get the total output power.