›
Choose the Ideal Bluetooth Protocol for Your Design

Choose the Ideal Bluetooth Protocol for Your Design

Most people do not understand the difference between Bluetooth Low Energy and Bluetooth Basic Rate/Enhanced Data Rate. The emergence of Bluetooth 5 has further confused the landscape. This application note explains the differences and suggests ways to determine the best version for your design. A similar version of this application note originally appeared on July 18, 2019, in Electronic Design and in Microwaves & RF.

Electronic devices equipped with wireless communication free us from the tangle of plugs and cables. Bluetooth® wireless technology is one of the most popular protocols that enables us to send and receive data wirelessly, as its versatility allows it to be used in many applications. For example, Bluetooth wireless technology inside vehicles lets us play favorite tunes on our smartphones from the car stereo. Inside homes, Bluetooth wireless technology in smart home security systems lets us lock and unlock doors with our phones. We are also tapping into the protocol to send files between a tablet and a computer, send updates from a fitness tracker to a smartphone, and much more. Figure 1 depicts two common Bluetooth technology-enabled devices: a smartphone and a laptop. 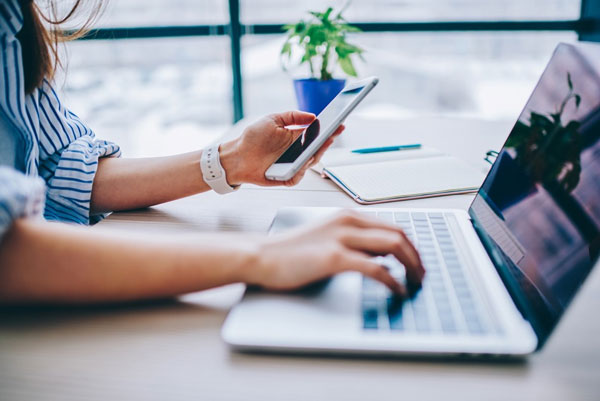 Figure 1. Bluetooth wireless technology lets us send and receive data without the tangle of cords and wires.

Bluetooth BR, the first Bluetooth protocol developed, implements a unique method that uses Gaussian frequency shift keying (GFSK) to exchange data within the 2.4GHz ISM band. The 2.4GHz ISM band was chosen because communication is free. Unlike most frequency bands, a license is not required to operate within this band. Bluetooth BR quickly become popular because it provided a low-cost, low-power way to send and receive data wirelessly across short ranges at data rates up to 0.7Mbps.

Bluetooth LE was first developed by Nokia as a wireless technology called Wibree. It was designed to consume very little power, making it ideal for devices that run on small batteries. It was also developed to be very low cost and easy to configure. Wibree included many techniques similar to Bluetooth BR/EDR, including operation in the 2.4GHz ISM band, GFSK modulation, a channel scheme, and frequency hopping. Given these similarities, the Bluetooth SIG eventually adopted Wibree into its specification, releasing it as a new low-energy extension called Bluetooth Low Energy (Bluetooth LE).

Bluetooth LE also adds another element to its channel scheme. Bluetooth LE reserves three channels for a Bluetooth LE radio to advertise that it wants to be discovered. The frequency of these three advertising channels were strategically chosen to avoid interference with the three most frequently used Wi-Fi channels that also operate in the 2.4GHz ISM band. Once a connection is made, the radios will continue their communication on one of the other 37 channels. Figure 3 depicts the channel scheme for Bluetooth LE and shows where the three advertising channels are located within the frequency band.

Energy conservation is a key way in which Bluetooth BR/EDR and Bluetooth LE differ. Bluetooth BR/EDR uses a maximum output power of 100mW to transmit data up to ~10m–100m. These specifications worked well in the days where most devices could be charged frequently. However, as demand for products that can run off battery power for months or years without being charged increases (thanks to the IoT influence), this type of output power will no longer suffice as it would quickly drain the battery.

Bluetooth LE is ideal for these types of devices, as it reduces the energy by only turning on the transmitter and receiver when they are needed to send or receive data, with a maximum power output of only 10mW to transmit up to the same range. Bluetooth LE also sends data in short bursts of packets. When packets are not being sent, the radio sits idle, drawing little to no power.

Latency is another area where Bluetooth LE outperforms Bluetooth BR/EDR. Bluetooth BR/EDR needs approximately 100ms to be ready to send data. There is an additional 100ms latency from when data is received at the transmitter to when it is available at the receiver. This can create a fairly noticeable delay in some cases. It also leads to higher power consumption because the extra time required to send data draws more energy from the battery.

Bluetooth LE offers much lower latency, requiring only 3ms to be ready to send data. Also, the latency from when data is received at the transmitter to when it is available at the receiver is only 6ms. This allows data to be sent more quickly and also saves power.

Bluetooth 5 uses the original low-power Bluetooth LE technology with some new enhancements. One of the biggest enhancements is the introduction of three PHYs that can be selected to improve the maximum range or throughput. Bluetooth 5 also adds enhancements that improve advertising.

The first PHY that Bluetooth 5 offers is called LE 1M. This is the same PHY used for Bluetooth LE in the Bluetooth 4.2 specification, so most of its parameters will match those shown in Table 1. LE 1M is the only PHY that is mandatory in Bluetooth 5. The other two PHYs are optional.

Bluetooth 5 integrates an LE-coded PHY as one of the optional PHYs to extend the range of communication. The coded PHY achieves longer range by introducing redundancy for some processing gain, instead of increasing the power of the transmitter. This version also has some additional redundant bits that are used to determine what the correct value of a bit should be. The coded PHY comes in two variations: S=2 and S=8. S=2 sends two symbols per bit, which decreases the throughput by a factor of two, but theoretically doubles the range. S=8 sends eight symbols per bit. This decreases the raw throughput by a factor of eight, but approximately quadruples the range. In practice, the actual range will be a little lower than the theoretical values, but this method still helps to achieve a much larger range.

Not every application is dependent on range, so Bluetooth 5 includes something for applications where throughput is more important than range. For example, it includes a data rate option called LE 2M, which doubles the raw data rate to 2Mbps. It allows for data to be sent at a maximum actual throughput of 1.4Mbps. This means that data can be transferred even faster than Bluetooth BR, but with lower power consumption.

Table 2 compares the three PHYs available in Bluetooth 5 to show how they differ in terms of raw data rate and range.

Table 2. Important Differences in the Three PHYs of Bluetooth 5

Which Bluetooth Protocol Is Best for Your Application?

The differences in the PHY are key to determining which protocol best suits each application. Since Bluetooth BR/EDR compromises packet latency and power for a higher throughput rate, it is ideal for applications where throughput is a critical specification, such as streaming or sending large amounts of data. Common applications are wireless headsets (Figure 4) and point-to-point applications. 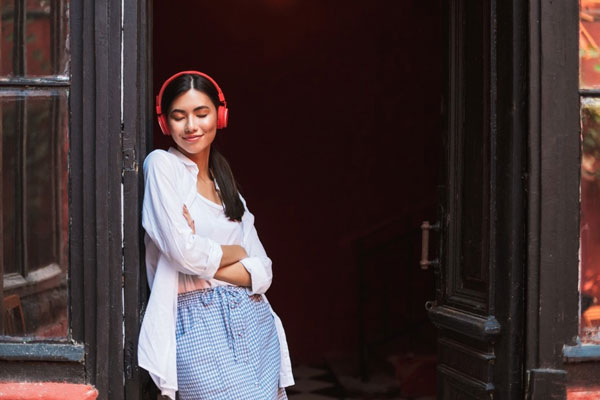 Figure 4. Wireless headsets are an example of a common application for Bluetooth BR/EDR.

Bluetooth LE is optimal for applications that only need to send small amounts of data where the device can wake up, transmit the data it needs to, and then go back to sleep. The low power consumption of Bluetooth LE is excellent for devices that are powered from a small battery, such as a heart-rate monitor. The heart-rate monitor does not need to send data often, but it does need to run for an extended period on a battery. As more products become connected, we will likely see many new applications of Bluetooth LE.

Bluetooth 5, which promises extensive improvements, has begun to appear in popular technologies, including many popular smartphones. To be ready for Bluetooth 5, you'll want to be sure that you have a Bluetooth 5-compatible microcontroller that addresses the key requirements. One example is the MAX32666GWPBT, which has dual Arm®-Cortex®-M4 cores and separate hardware dedicated to running the Bluetooth stack. This leaves the two cores entirely free for your application. Figure 5 is a block diagram showing key features of the MAX32666GWPBT. 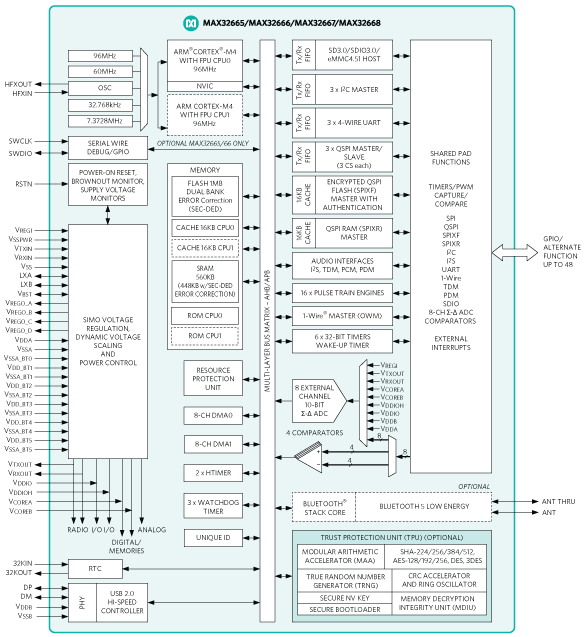 Although all of the technologies discussed in this application note are under the realm of Bluetooth wireless technology, they truly offer different strengths and features for various types of wireless electronics. To determine the ideal version for your applications, review the differences in the PHY listed in Table 1 to see where each protocol excels. In addition, be sure to consider how Bluetooth 5 will change the industry in the next few years with its higher throughput, longer range, and extended advertising capabilities.