Abstract: Oxygen supply has a vital importance for living cells and tissues. Blood oxygen saturation (SpO2) measurement by pulse oximetry has been an essential physiological monitoring tool for human health for many decades and is an indicator of the oxygen supply to cells and tissues. Maxim has developed high-sensitivity optical sensors with optimized algorithms to accurately measure SpO2 with wearable devices. In this application note, first, we present the theory behind SpO2 measurement by using photoplethysmographic (PPG) signals. Then, we show the details of the algorithm calibration process, which is required to improve the accuracy of the algorithm when Maxim’s sensors are used with different optical shields and form factors. In addition, we demonstrate the algorithm evaluation against clinically relevant accuracy requirements through leave-one-out cross-validation. Finally, we present how the algorithm can be executed with obtained calibration coefficients. We also show the details of the algorithm output data format.

Pulse oximetry (percentage of SpO2 concentration in blood) has been used as a key health indicator for many decades. Although the original academic development was made in 1935, the modern basis for determining the SpO2 concentration using light sources and photosensor(s) was developed by Takuo Aoyagi and Michio Kishi in 1972. When commercially feasible, SpO2 concentration measurement devices have made huge gains in medical applications. Since 1987, the Standard of Care (SoC) for the administration of a general anesthetikc has included pulse oximetry. All modern hospital bedside equipment include an SpO2 module based on the same fundamentals, albeit with minor modifications.

However, these hospital-based devices are expensive and bulky, and in their current form, their use is limited to hospitals, health clinics, and some doctor’s offices. To enable individuals interested in tracking their body’s key health indicators, a solution that is both light enough to wear in comfort and cheap enough for a typical consumer to purchase is needed.

Maxim has a solution that functions as a drop-in module for wrist-worn health bands, as well as finger-based pulse oximetry devices. This application note covers the theory behind pulse oximetry as well as typical design and calibration processes needed to incorporate our solution into various wearable devices.

where C[HbO2] and C[RHb] are the concentrations of HbO2 and RHb, respectively.

Beer-Lambert Law
The Beer–Lambert law describes the attenuation of light with the properties of the material through which the light is travelling. According to the Beer-Lambert law,

where A is the attenuation, I0 is the incident light intensity, I is the received light intensity, ε(λ) is the molar extinction coefficient, C is the concentration of material, and d is the optical path length.

Considering the molecule compound of tissue, Beer-Lambert law can be extended as follows:

The Beer-Lambert law enables us to measure SpO2 by using the molar extinction coefficients of HbO2 and RHb.

Pulse Oximetry
Pulse oximetry is a tool used for the noninvasive measurement of blood oxygenation (i.e., SpO2. Pulse oximetry is based on two principles: modulation of transmitted light by absorption of pulsatile arterial blood and different absorption characteristics of HbO2 and RHb for different wavelengths.

Pulse oximetry can be classified as transmissive and reflective: Figure 1. A schematic of pulsatile arterial blood and other blood and tissue components.

The pulsatile arterial blood absorbs and modulates the incident light passing through the tissue and forms the photoplethysmographic (PPG) signal, as shown in Figure 2. The AC component of the PPG signals represents the light absorbed by the pulsatile arterial blood. This AC component is superimposed on a DC signal that captures the effects of light absorbed by other blood and tissue components (e.g., venous and capillary blood, bone, water, etc.). The ratio of the AC signal to the DC level is called the perfusion index (PI). Figure 2. Photoplethysmographic (PPG) signals received by a photodiode from red and infrared LEDs. For more information, a detailed theory of pulse oximetry and noninvasive SpO2 measurement can be found in Development of a fractional multi-wavelength pulse oximetry algorithm[1].

SpO2 measurement is achieved by the following equation:

where R is determined by the following equation:

Why is Calibration Required?
The SpO2 measurement performance of a device must be verified before the device is released to the market. The U.S. Food and Drug Administration (FDA) suggests using standards presented in the following:

According to these regulations, manufacturers need to declare the calibration range, reference, accuracy, methods of calibration and range of displayed saturation level. Furthermore, for the performance assessment, the FDA requires at least 200 data points equally spaced over a saturation range of 70% to 100%. Test subjects should have different ages, gender, and skin tones. For instance, the FDA requires that at least 30% of the volunteers must have dark skin pigmentation. The overall error or the root mean square error (RMSE) must be below 3.0% for transmissive pulse oximetry and below 3.5% for reflective pulse oximetry. Figure 4. Theoretical and calibrated R-curves. All phones use the same sensor with different optical shields, which result in slightly different R-curves.

In addition, Figure 4 shows the effect of a cover shield in front of the sensor. Although, all phones use the same sensor, their calibrated R-curves are slightly different from each other. Thus, a calibration process is required to obtain calibration coefficients for better measurement accuracy by compensating for the deviations from the Beer-Lambert law and the non-idealities of the hardware. These coefficients are obtained after collecting comprehensive data in a 3rd party calibration lab.

In the calibration lab, the SpO2 level of the test subjects are varied in a controlled manner and the PPG signals measured from the test subjects are recorded. During data collection, the test subjects use a gas mask to control their SpO2 level. Through the gas mask, the blood oxygen content is reduced incrementally by changing the oxygen level of the test subject from 100% SpO2 and lowering to 70% SpO2. After collecting enough data according to the FDA regulations, the recorded PPG signals are used to find the R values. Then, a second (or first) order line is fitted to obtain the calibration coefficients a, b, and c for the SpO2 measurement algorithm, as shown in Figure 5. Figure 5. R-curve based on the collected data from the calibration lab. Each color represents a different test subject.

Maxim’s algorithm outputs the R values. No further effort is required to obtain R from the recorded PPGs. After obtaining the R values with the corresponding reference SpO2 values, it is easy to obtain the calibration coefficients. Figure 7. Maxim's sensor placed in a wrist watch. The finger clips of two reference devices are attached to the index and middle fingers of the test subject Figure 9. The stable SpO2 plateaus are shown on the reference SpO2 values. 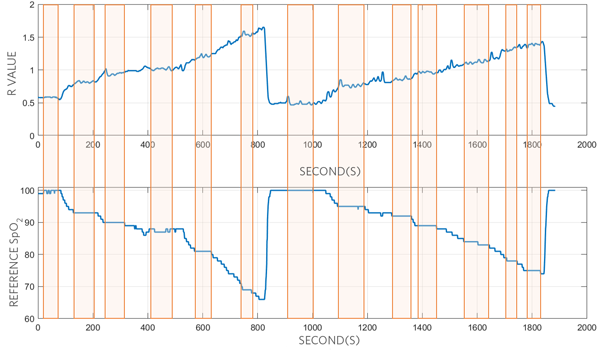 Figure 10. The stable SpO2 plateaus are shown on the reference SpO2 values and output R values. 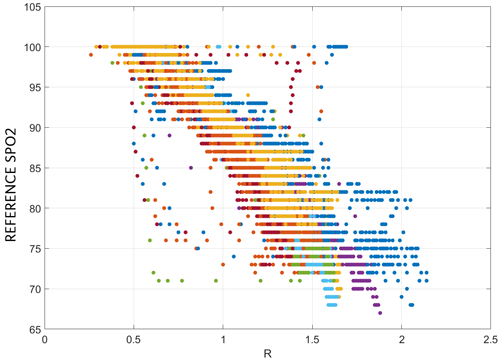 Figure 11. Reference SpO2 values with respect to the calculated R values based on the collected data from the calibration lab before outlier elimination. 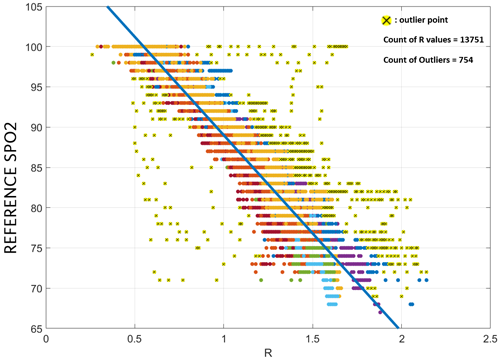 Figure 12. Reference SpO2 values with respect to the calculated R values based on the collected data from the calibration lab after outlier elimination.

When the three calibration coefficients are obtained, they need to be loaded to the MAX32664 through the I2C interface during the initialization process. For more information on the list of commands and initialization instructions, refer to the MAX32664 User Guide[2] and the related application notes for each specific part.