Abstract: System engineers dread the prospect of not passing electromagnetic interference (EMI) compliance testing at the end of a product development cycle. If this happens, it can cause a major setback to the product shipping schedule and could also trigger a costly total power re-design. This application note examines how to achieve first-pass EMI success using a well-planned power solution design that utilizes a proper filter, low EMI components, low EMI power regulator ICs, and/or low EMI power modules, along with good PCB layout and shielding techniques.

When an electronic device is connected to, shares the same power source with, or is near another electronic device that generates electromagnetic interference (EMI), EMI can disrupt operation of the device. EMI is either conducted or radiated, and EMI related problems can prevent adjacent pieces of electronics equipment from working alongside one another.

There are many common examples of EMI:

Given the prevalence of electronic equipment in our lives, the issue of electromagnetic compatibility (EMC) has become an important topic. As a result, standards bodies have emerged to ensure proper performance of electronic equipment even with EMI to make it possible to operate mobile phones and other wireless devices near almost any electronics equipment with little or no effect. Designers have taken steps to ensure that equipment does not radiate unwanted emissions and to make equipment less vulnerable to radio frequency radiation.

The CISPR 22 EMI specification (often referred to as EN55022 in Europe) divides equipment, devices, and apparatus into two classes:

EMI testing consists of conducted and radiated emission testing. Conducted emission testing is done in the frequency range of 150kHz to 30MHz, which is where the AC current is conducted into the line source and is measured using two methods: quasi-peak and average. Each method has its own limits.

Switching Power Supplies: Where are the Noise Sources?

Switching power supplies can generate electromagnetic energy and noise as well as be affected by electromagnetic noise from external aggressors. Noise generated by a switching power supply can be in the form of conducted or radiated emissions. Conducted emissions can take the form of voltage or current, and each of these can be categorized as common-mode or differential-mode. Also, the finite impedance of connecting wires enables voltage conduction to cause current conduction, and vice versa, and differential-mode conduction to cause common-mode conduction, and vice versa.

For a closer look at noise sources in a switching power supply, Figure 1 shows a simplified buck regulator schematic.

As shown in Figure 1, the input current (II) of the buck regulator is a pulsing waveform, which is the main source of conducted, differential EMI injecting back into the power source (VS). Conducted emissions are primarily driven by fast-changing current shapes at the input of the converter (di/dt). The value of conducted emissions is measured as voltage at the input of the converter (VS) using a line impedance stabilization network (LISN). The input capacitor (CI) filters out the AC (pulsing) component. The net current (IS) is the difference between II and ICI. IS must be DC or as smooth as possible. If CI is an ideal capacitor with infinite capacitance, it would keep VI constant and effectively filter out all the AC components of I1, leaving a constant (DC) current flowing from the source VS and a constant DC voltage drop across the source impedance (RS). In this case, the conducted EMI is zero since IS is a DC current. In practice, use a π-filter between the input source and the converter to contain conducted EMI within the regulatory limit.

Conducted emission usually poses a greater problem for fixed systems than for portable systems. Because the portable device operates from batteries, the load and source have no external connections for conducting emissions.

Radiated EMI are fast-changing magnetic fields that have a high-frequency content of 30MHz and above. Magnetic fields are generated by the circuit’s current loops. Changes in these fields, if not properly filtered or shielded, can couple into other nearby circuitry and/or equipment and cause radiated EMI effects.

Figure 2 shows a buck converter with fast di/dt current loops I1 and I2. The current loop I1 conducts during the on-time when S1 is on and S2 is off. The current loop I2 conducts during the off-time when S1 is off and S2 is on. The pulsating nature of the current loops I1 and I2 causes change in the magnetic fields with a field strength that is proportional to the change of the current magnitude and the area of the conducting loop. Fast di/dt current edges generate high-frequency harmonics and EMI in the regulatory radiated range. Keeping the area of these current loops small minimizes the field strength. Slowing down these edges reduces the high-frequency harmonic content of the switching regulator, but slow transitions impact the regulator efficiency due to wasted energy. This application note describes techniques that minimize the EMI radiation without impacting efficiency. 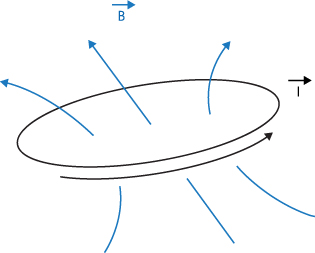 The voltage node LX (also called other names such as SW by some vendors) is a rectangular wave (ignore the parasitic ringing for now) that is connected to the inductor. Fast LX’s dv/dt voltage discontinuous edges couple the high-frequency current to CO and the load through the output inductor’s parasitic capacitance, which can in turn generate EMI noise. Minimizing the output inductor’s parasitic capacitance can reduce this noise-coupling issue. LX also has high-frequency parasitic ringing, which can be reduced by using an RC snubber network from LX to GND.

The same principle of the EMI noise sources described above applies to other switching-converter topologies as well. However, the severity of the noise depends on the current and voltage wave shapes of a specific topology. Consider a boost converter running in continuous conduction mode. In this scenario, the converter has a less conducted EMI component at its input, since the input current is more continuous compared to that of a buck converter.

Designing and planning for EMI compliance upfront in the design process is essential for project success. Doing so late in the game makes the process challenging, time consuming, and costly. Line filtering, power-supply design, proper PCB layout, and shielding are some common techniques to minimize EMI.

A π-filter placed between the input source and power converter reduces conducted emissions from a power converter. Select the filter components by performing the steps, as follows:

The output impedance of the LC filter at its resonance frequency, which is the highest value, is as follows:

The PCB layout has a significant effect on the EMI compliance. A bad PCB layout can ruin a power converter with perfect electrical design. Based on the same buck converter example, here are some of the best practices for PCB layout to minimize EMI noise sources:


When using a buck regulator IC (i.e., a buck controller with integrated power switches S1 and S2), it is important to select ICs that have good pinouts to allow this minimization. The same consideration applies to using power modules.

Figure 6. Faraday shield applied on a multi-layer PCB board.

Consider Maxim's Himalaya wide input IC, MAX17502, which operates at 4.5VIN to 60VIN, 0.9VOUT to 54VOUT supplying 1A current. The following is the MAX17502 EMI EV kit PCB layout, using the Faraday shield technique (b). Figure 7a shows the top and bottom layers used as the Faraday shield. Figure 7b shows the second and third inner layers for routing. The second layer is used as an extra shield, but it can also be used to route traces. In this layout, the high di/dt current loops I1 and I2 are routed on the third layer, which is completely enclosed in our Faraday shield.

Figure 7b. Second and third (inner) layers, with high di/dt loops routed on the third layer.

Figure 8 and Figure 9 show the EMI test results of this MAX17502 EMI EV kit, which passes CISPR 22 Class B with good margin. 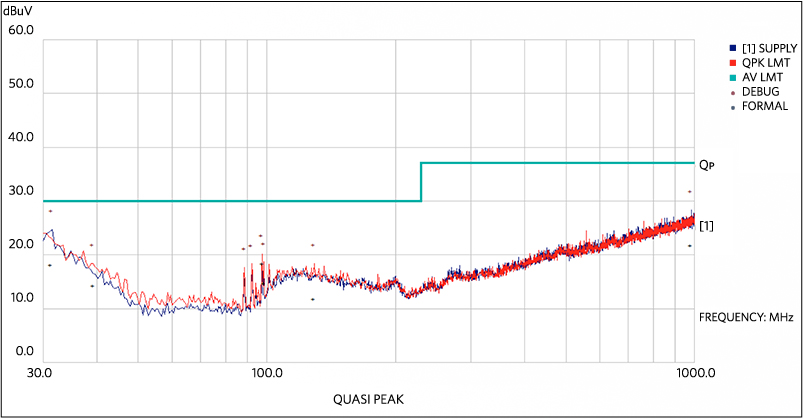 Maxim’s Himalaya regulator and power module families employ low EMI power inductors and good PCB layout practices and provide inherently low EMI power solutions. Using the Himalaya solutions means you do not need to worry about compliance, unlike with other simplistic switchers in the market. Maxim has done all the work with the ICs, modules, and example reference layouts so that you can pass CISPR 22 (EN 55022) at optimal cost. The following displays EMI test results of an example, MAXM17575, together with input EMI filter information: 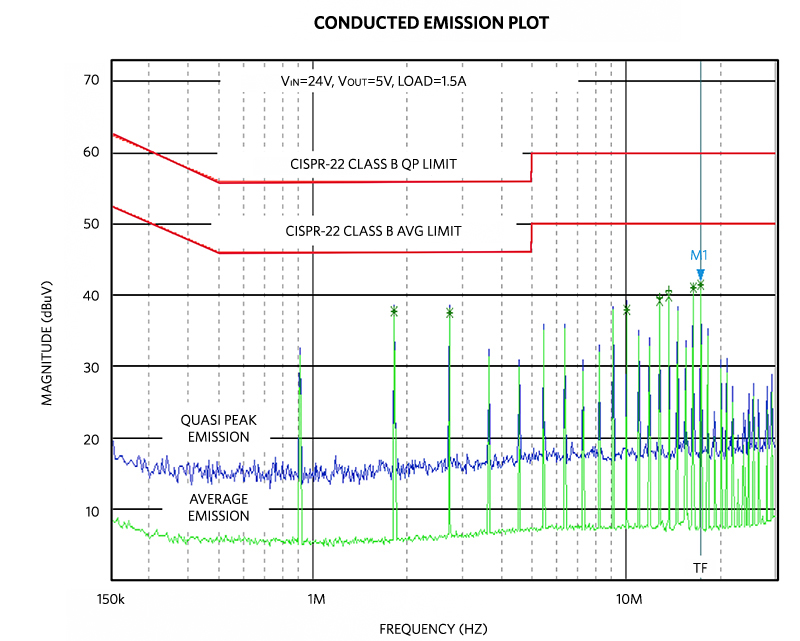 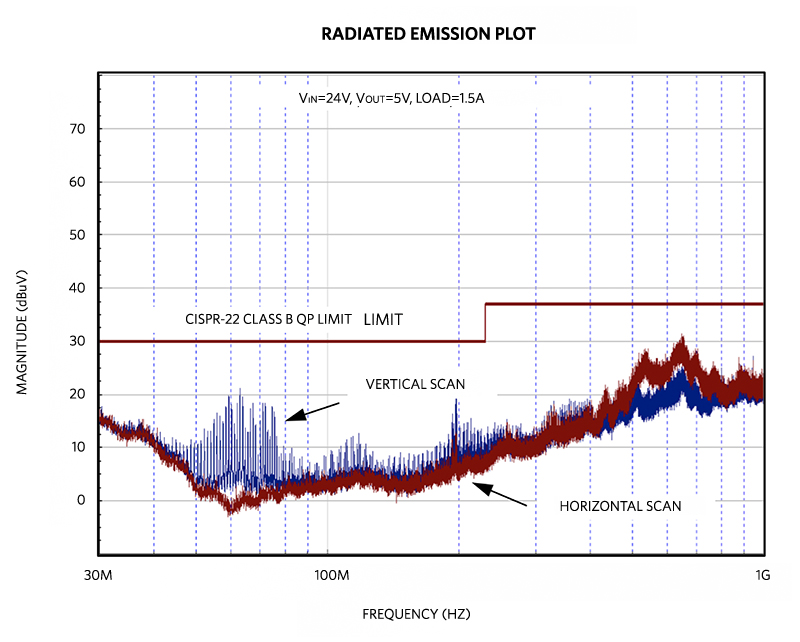 Addressing the EMI compliance of your design at the earliest phases of the design cycle is critical for project success. This application note covers common techniques for minimizing EMI, as well as guidelines and examples for line filtering design, good PCB layout, and shielding practices. Applying a well-planned design using a proper filter (low EMI PMICs, components, and/or power modules) and good PCB layout techniques and shielding can put you on the right track toward first-pass success.