Abstract: Uses the MAX641 switching controller and an external discrete charge pump to step up the input voltage. This circuit can service low loads and is efficient when the output is two, three, four times the input voltage. Adding the MAX627 MOS driver can further increase the output current capability.
In conventional applications, switching-regulator ICs regulate VOUT by controlling the current through an external inductor. The IC in Figure 1, however, driving a diode-capacitor network in place of the inductor, offers comparable performance for small loads. Made of readily available components, the network can double, tripple or quadruple the input voltage. Though somewhat less efficient than inductor-type regulators, the Figure 1 circuit offers equivalent line and load regulation. 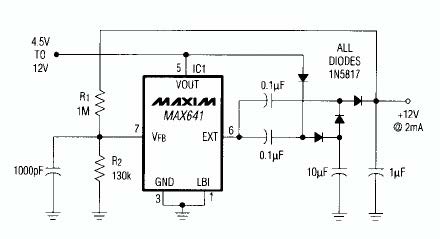 Figure 1. Substituting the diode-capacitor network shown for an inductor allows this switching-regulator IC to deliver 2mA at comparable line and load regulation, with somewhat reduced efficiency.

Feedback from the R1/R2 voltage divider enables IC1 to set the regulated-output level. (As shown, the circuit derives 12V from a 5-to-12V input and produces as much as 2mA of output current.) Adding a non-inverting MOS drivers (Figure 2) boosts the available output current to 20mA.

Figure 2. Introducing a MOS driver (IC2) enables the Figure 1 circuit to deliver as much as 20mA.