PoE technologies are proving to be quite energy-efficient for a variety of applications, including IoT, lighting, digital signage, building control, surveillance camera, VOIP phones, access control and door monitoring, graphic displays and so on. One of the biggest advantages of PoE, said Agarwal, is that it reduces total cost of ownership by as much as 75% versus traditional power sources, since there are no elaborate electrical safety systems to install. It also provides for ease of maintenance. Since power circuitry is vulnerable to damages, the PoE solution can save the expensive motherboard of a network device, replacing it with a power circuitry module.

Many of Infomart’s customers, particularly in the small- and medium-sized segments, have limited analog resources on staff. They rely on Infomart’s fully tested products and expertise to help them meet their customers’ demands quickly. “Infomart believes in offering cutting-edge products and maximizing the quality, cost, and performance,” said Agarwal. “We always try to maximize value to our customers and, to this end, we’ve made the world’s smallest PoE module with on-board inductor, and we have engineered the module to provide a full 13 watts despite such a small space,” he noted of Infomart’s PEM1400 PoE PD module. 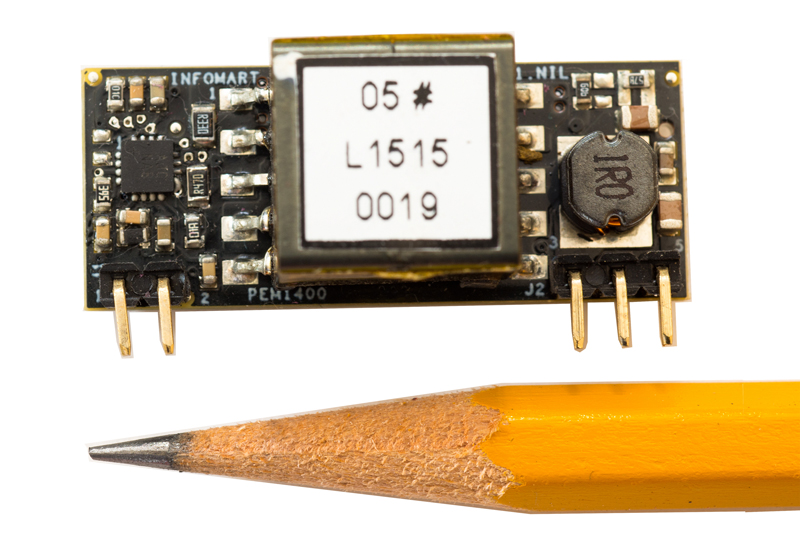 Infomart’s Power-over-Ethernet device is available in a compact package, ideal for a variety of applications, including IoT devices.

Meeting the small size and power efficiency of its PoE devices are among Infomart’s primary design challenges. Infomart also wants its products to be highly integrated, offering customers various protections and functions, such as frequency dithering, low ripple and noise, overload and short-circuit protection, under-voltage lockout (UVLO), and over-voltage lockout (OVLO). Infomart needed peak-current-mode controllers that would enable it to build power supplies to support its stringent size and power requirements.

Agarwal was acquainted with a Maxim® field applications engineer (FAE) from a previous collaboration. Impressed with the FAE’s expertise and patience, Agarwal included Maxim in the mix of IC vendors under evaluation. Ultimately, Agarwal and his team selected Maxim peak-current-mode controllers for their design. These controllers offer many of the features Infomart wanted:

“One other crucial point was the technical support from Maxim, which was a big differentiator,” Agarwal noted.

Agarwal remembers when a voice-over-internet-protocol (VoIP) telephone instrument manufacturer needed help shrinking its already-small module, which was two inches long and about a half-inch tall. “Because of the level of integration that the Maxim chip offered, along with its physical size, we reduced the VoIP module to about one and a half inches in length,” he said, adding that they were able to maintain the same power and performance levels and high temperature tolerance (without requiring fans).

Even though its PoE module is so small, Infomart was able to include an output inductor on its device’s board for the filtration circuit, in order to meet IEEE specifications. By contrast, the company’s competitors don’t offer this in their smaller footprint models, requiring their customers to invest in an external inductor, noted Prasanna Taleyabbi, the company’s product line manager. “The Maxim peak-current-mode controller is only 3mm x 3mm. Because of its size and its high level of integration, we were able to reduce our whole module size by about half,” Agarwal said. Compared to its previous PoE PD module developed with another controller, the PEM1400 module based on the Maxim IC offers about 1.5% higher efficiency. The PEM1400 is small, yet powerful, delivering full power as permitted by IEEE802.3af standards from all three voltage variant models – a feat no other competitor could achieve.

Currently, Infomart is developing an ultra-high-power board that will provide four levels of PoE power: 13W, 30W, 60W, and 95W. Most of the levels will use Maxim ICs. 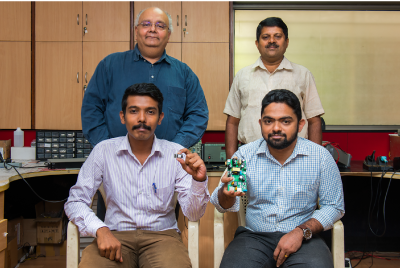 “The Maxim peak-current-mode controller is only 3mm x 3mm. Because of its size and its high level of integration, we were able to reduce our whole module size by about half.”