Bigger batteries give you more capacity, but this approach isn’t practical if you’re designing a tiny device. So how do you extend battery life in small products? nanoPower technology—where current levels are measured in the nanoamps—offers an answer to this conundrum.

For details, let’s consult with the world’s foremost expert in nanoPower technology—nanoMan. Fresh from his whirlwind tour through embedded world in Germany, nanoMan had a few moments to rest his chin and explain why he wants to help you lower your IQ. 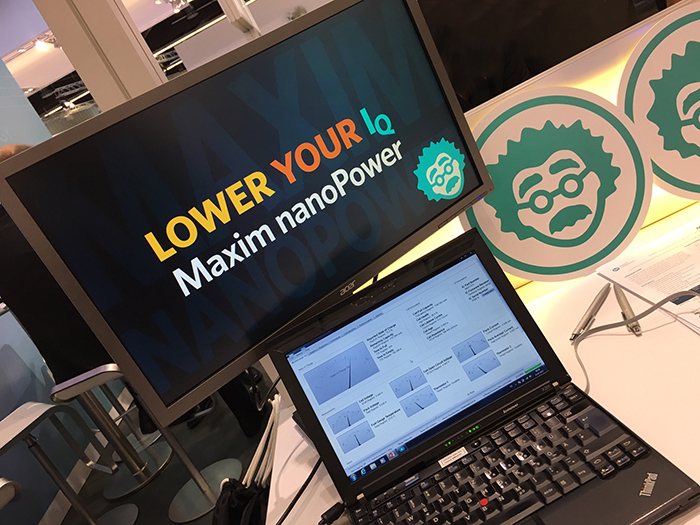 First off, what makes designing small, battery-powered devices so tough?

You’ve got to fit all of your components into something as tiny as an earbud, or as thin as a medical patch. And you know your customers will punish you if the battery doesn’t last long between charges. Oh, and don’t forgot about devices that might sit on a shelf for an extended time before they’re put to use. That glucose monitoring strip had better work reliably for its expected duration.

But why would anyone want to lower their IQ? Isn’t this counterintuitive?

Hardly. Higher IQ means greater intelligence, right? Well, the smartest engineers focus on lowering the IQ, or quiescent current, of their products. The lower the IQ, the more you can extend battery life. That’s because the quiescent current of a device’s power supply is the biggest contributor to the system’s standby power consumption. And standby current is critical when devices like wearables are spending more of their time in sleep or hibernate mode. We need to find new ways to improve the power savings when devices are in these passive modes.

And who doesn’t want longer battery life? I can’t tell you how many times my earbuds have run out of juice while I’m trying to catch up on the latest Titanium Physicists Podcasts or when all I want to do is chill to Drake. So that’s why I’ve dedicated my life to teaching engineers about Maxim’s nanoPower ICs.

That’s dedication. Curious—what would you be doing if you weren’t the face of nanoPower?

Of course I’m a science and tech buff, but I do love the outdoors, too. I’ve often thought of becoming a groundskeeper for a Major League Baseball team. Can you picture it? Maintaining the outfield grass, dragging the infield in between innings. Or becoming a master sushi chef.

You made the rounds at embedded world. What else are you doing to spread the word about nanoPower?

I’ll be tweeting tips and tricks with #nanoMan. So be sure to follow me on Twitter if you can’t catch me in person. We’ll have some fun and games as we learn, too!

So tell me, what’s so special about Maxim’s nanoPower ICs?

With wearable, mobile, and—for lack of a better buzzword—IoT designs, even microamps of current aren’t low enough to make a difference in battery life. I’ve worked with a lot of ICs over the years, and I can tell you that Maxim has one of the broadest portfolios of comparators, op amps, supervisors, current-sense amplifiers, and regulators with quiescent current in the nanoamps. And I’m not just saying all this because the marketing guy forced me to (though he did twist my ‘stache a little with a bottle of Bailey’s).

So how low are the currents in these ICs?

The latest is the MAX17222 boost DC-DC converter, with just 300nA of quiescent supply current. It also extends battery life through its True Shutdown mode. I know, True Shutdown sounds like a marketing buzzword (and, no, I’m not being paid by marketing). Raised my eyebrows until I saw what it means—in this mode, the output is disconnected from the input with no forward or reverse current. The part is small, too, available in a 0.88mm x 1.4mm 6-bump WLP package. 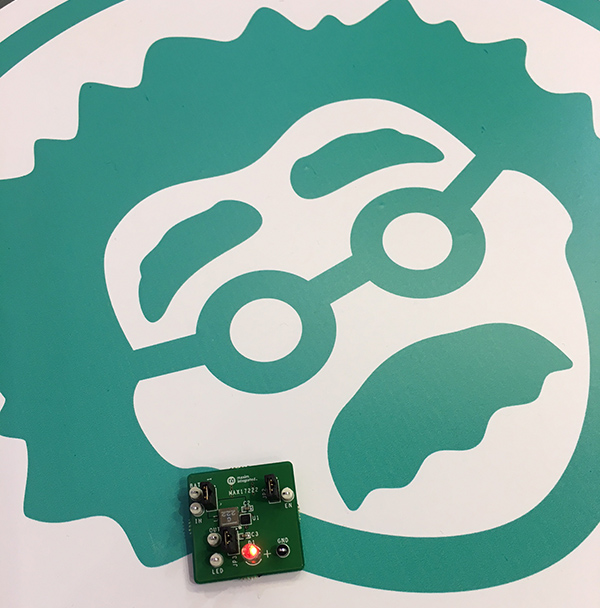 At embedded world, nanoMan helped educate attendees about how lowering quiescent current with a boost converter like the MAX17222 can help extend battery life for small, portable devices.

There are also dozens of nanoPower system monitoring ICs, like the comparators, op amps, etc. that I mentioned earlier, all with quiescent current under 1µa.

You wouldn’t buy a car or a house without insuring it, would you? If you would, well, you’re a bigger risk-taker than I am! nanoPower system monitoring ICs are like analog insurance—they help ensure that voltage levels in your design are where they should be, without being a drain on your overall power and cost budgets.

When would you use nanoPower parts?

Any small wearable device, like a fitness tracker, smartwatch, or medical patch. IoT sensors are another example. Think about battery-powered devices that spend a lot of time in sleep mode or even on stockroom shelves before they’re used.

What would you design with nanoPower circuits?

I’d design a decoder ring that could instantly translate different languages, so I could share my nanoPower knowledge faster in different countries.

Do you have much time for design work?

I’m all nanoPower all the time. But when I do have free time, I hit the bowling alley. I like to picture the ball as a spinning electron with its wavefront knocking down the pins—strikes every time! And I unwind with bikram yoga—it’s doing wonders for my abs and it’s great for heat dissipation, if you know what I mean.

How has fame changed your life?

I didn’t have to wait in the queue for Hamilton tickets. And I when I go to my favorite sushi place, the chef lets me make my own temaki. A lot of people want to take selfies with me, but that goes with the territory of being the face of nanoPower.

Do you have superhero powers?

I can teleport, which comes in handy because who likes getting squished in the middle seat on a cross-country plane ride? I can do a little shape-shifting, but to be honest, I’m not that great at it. Like the time I wanted to become a tiger but turned into a three-legged bar stool.

Who does your hair?

I have a stylist, the same one who works on Ronald McDonald’s hair. She knows how to shape my signature peaks and valleys.