Step-down (buck) voltage regulators have long been the preferred DC-DC conversion electronic workhorse thanks to their inherently high efficiency. Only in buck mode the current is directed to the output during the entire cycle. The higher delivery of current to the output, per cycle, makes the buck converter the most efficient architecture. As one of many examples, modern microprocessors, from those used in powerful server blades to smartphones, operate with very low input voltages, making the buck converter the necessary power source. As these applications grow in sophistication, the power source has to beef up its power delivery while stepping up its efficiency to reduce heat losses. Accordingly, the buck converter has evolved from non-synchronous to synchronous switching and from a single-phase device that delivers a few hundred milliamperes of current to a multiphase device that can successfully deliver tens to hundreds of amperes of current. Figure 1 shows a modern four-phase interleaved buck converter powering a CPU core chip for smartphones and tablets. 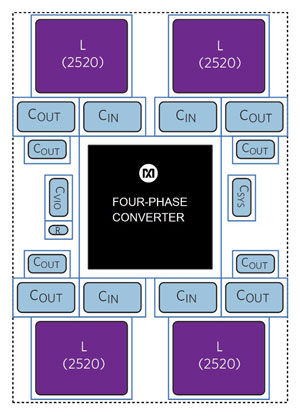 For simplicity, we will focus our discussion on a two-phase interleaved, synchronous buck converter architecture (Figure 2). 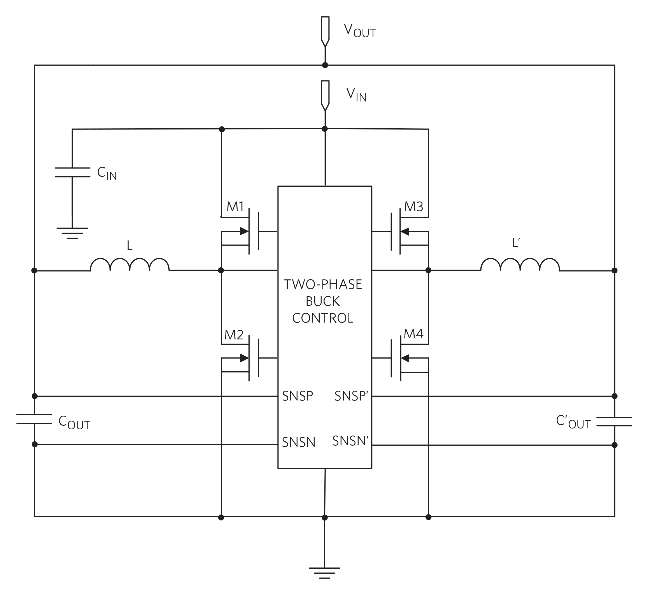 The two interleaved phases assure ripple current and, hence, ripple voltage reduction. Low total ripple current is obtained at a relatively low per-phase frequency of operation. As an example, Figure 3 shows that two ripple currents 180° out-of-phase at 33% duty cycle result in a total ripple current with half the amplitude of a single phase at twice the frequency. Lower output current ripple and voltage ripple at higher frequency means fewer capacitors are needed on the output, resulting in a smaller BOM.

Additionally, as shown in Figure 5, two-phase (2Φ, shown in red) is more efficient than single-phase (1Φ, shown in blue) when the two schemes run at the same output ripple frequency. Single-phase, by running at two times the switching frequency (fSW) of two-phase, can also achieve high frequency and low current ripple but at higher switching losses. The two schemes have an equal number of transitions within one period, but the two-phase converter draws half the current of the single-phase converter (over twice the duration), thus reducing the switching losses.

Another great benefit of a two-phase converter is the fast transient response and reduced voltage overshoot/undershoot during load steps. With half the current per phase, reduced current ripple amplitude, and double the ripple frequency, the phase switching frequency can now be pushed higher to further reduce the component size and increase the closed-loop bandwidth of the converter without running into thermal limitations.

Finally, as the total load current increases, the size of the passive components increases. For high loads, the inductor for a single-phase buck can be bulky and inefficient. Multiphase operation reduces the current in each phase, which ensures optimal sizing for passives.

As an example, MAX77812  is a 20A configurable, single-to-quad-phase, single-to-quad-output high-current, buck (step-down) converter. A rich portfolio of multiphase interleaved buck converters is available to system designers.

Why a Coupled Inductor Is Ideal for High-Current Applications

In very high-current applications, where it is important to squeeze out the last percentage point of efficiency, there is another card to play: the coupled inductor, in which the inductors are wound around a common magnetic core. In a two-phase coupled inductor (Figure 6), the winding orientation is such that the magnetic flux cancels out, resulting ideally in a transformer with zero leakage inductance LK and infinite magnetizing inductance. In practice, we end up with a very low inductance per winding (Lk) compared to the uncoupled case.

Let us write the network equations with SW1 and SW4 on. The ideal 1:1 transformer forces equal winding voltages VW and equal voltage drops VLK across the inductances. For the top branch we have:

And for the bottom branch:

The buck voltage regulator is the low voltage DC-DC conversion workhorse, providing core power to applications from servers to smartphones. It has evolved from non-synchronous to synchronous, from single-phase to multiphase and, more recently, from uncoupled to coupled inductors, keeping up the pace of its sophisticated load and enabling its continued evolution.