Tesla marketing says “the electricity will only be a fraction of the cost of gasoline.” But is that really the case?

Electric vehicles are efficient, but operating costs can vary greatly. The new Chevy Bolt battery electric car with a 238-mile range per charge is making many engineers (or maybe all engineers) consider making the move to clean transportation. Electric vehicles (EVs) (the all-electric ones, not hybrid) convert about 59% to 62% of the electrical energy from the grid to power at the wheels, while the plain old gasoline vehicle only converts about 17% to 21% of the energy in a gallon of petrol. But, the cost to fill up the EV can vary greatly. 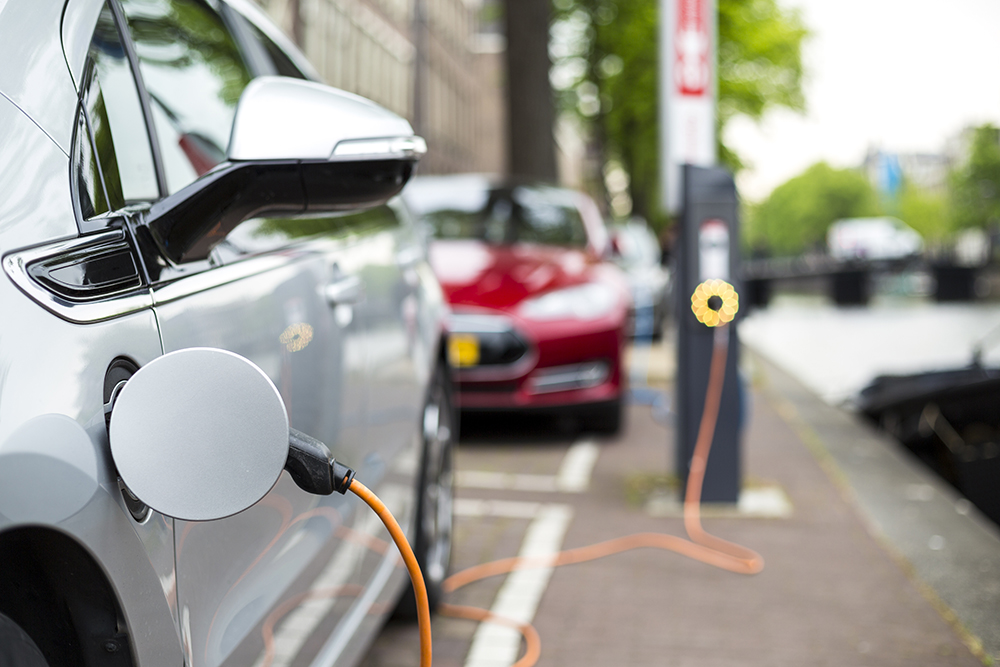 Costs can vary for charging an electric vehicle, based on charging fees as well as vehicle efficiency.

Some Background on Charging Your New EV

Any EV can be charged from plain old 110 VAC – if you have the time. You’ll add only about four miles of driving range in one hour. The 238-mile range Chevrolet Bolt would require 60 hours to fill from empty. If you need to charge a little faster, you will want home “electric vehicle service equipment” (aka EVSE). The vehicle’s on-board charger will convert the AC to DC and control charging. The on-board charging capability varies by make/model – from 3kW to as high as 20kW.

The standard home charging station for a Tesla, for example, runs from a 240V 40A service line and yields 7.7kW for a charging speed of 20 to 23 miles/hr. If you only have a 30A circuit, you only get 5.7kW. Tesla vehicles have two on-board charger options. The standard charger is capable of 48A (11.5kW) and the upgraded high-amperage charger, 72A (17.3kW). So, when you use one of the Tesla charging stations on the road, you can do either a little or a lot faster charging than from your home unit, depending on what option you selected. You can also use Tesla’s Supercharger stations and have up to a 135kW output. The charger evaluates the battery health/temperature/etc. and adjusts the charge rate to fit. Rarely will 135kW actually be output.

The Chevrolet Bolt will charge at 32A at 240V = 7.68kW, giving the car about 25 miles of charge each hour. Another example, the VW eGolf, has a 3.6kW charger and a 7.2kW option. The EVSE units are sometimes rated in miles/hour – the miles of range added for each hour of charge. Practical, but can be confusing.

Here’s a quick summary of four basic types of charging as per IEC 62196:

CHAdeMO is the trade name of a quick charging method for battery electric vehicles delivering up to 62.5kW of DC (500V, 125A) via a special connector. It is proposed as a global industry standard by an association of the same name, and is included in IEC 62196 (an international standard for a set of electrical connectors for electric vehicles) as level 4. The U.S. has at least 1,337 charging stations equipped with the CHAdeMO connector.

The SAE J1772 connector is used on most public stations for level 2 charging up to 80A. Tesla offers an adaptor for using J1772 ports.

The Combo Charging System (CCS) from SAE is a variant of the J1772 connector with additional pins to accommodate fast DC charging at 200 – 450 VDC and up to 90kW. SAE is working on rates up to 350kW. Automobile manufacturers that support CCS include: Volkswagen, General Motors, BMW, Daimler, Ford, FCA, and Hyundai.

Now Look at the Cost of Charging

At the Evgo public charge stations, the cost to subscribers is 10 cents/min for fast DC charging or $1.00/hr for Level 2 charging. These have a $5.95 monthly membership fee, with a 12-month contract.

But, hold on, some charge stations have $8/hr fees, and others have everything in between. And there are public charger stations that cost a lot per hour and put out 10kW, but if your car has a 3.3kW charger it won’t matter. So, EV owner beware.

ChargePoint stations are owned by the associated businesses where they are installed, and each business sets the fees. Often a store will give one free hour and then require $5/hr.  Target stores, for example, offer two free hours and after that, cost $2/hr. Well, $2/hr nearly wipes out any cost savings over gasoline.

Quite a few charge stations inside parking garages are free (with their normal parking fee), at least for now. Blink-branded charge stations, like others, have their price set by the associated business. But they set fees based on a more reasonable per kWh basis. My grocery store is $0.59/kWh for a guest or $0.49 for Blink member. But, now my Bolt would cost $0.49 x 60kWh = $29.40 to fill from empty. Considerably more than the gas vehicle equivalent ($19.75). Charging Your EV at Home

If an owner charges their EV from their home, the PG&E utility fee (in northern California) will be based on the time of day. PG&E has special rates for EV owners. The cost is as high as $0.454/kWh at peak times from 1pm to 8pm, or as low as $0.112/kWh from 11pm to 7am. This is per kWh, so filling up my 60kWh Bolt cost $27.24 during peak hours, or just $6.72 during off peak hours. The eight hours in a day that the low rate is in effect will just about fill her up. And all home charge stations have timers you can set to obtain the lowest cost.

The Bolt’s efficiency is 60 kW/238 mi or 25.2 kW/100 mi. But these numbers are just general, as this varies with road conditions and driver temperament, and just about anything else. And, the Bolt can gain a lot with regen during breaking. One Bolt driver reported going 300 miles using 58.6kWh—only 19.5 kWh/100 miles.

The EPA rates the Bolt at 28 kWh/100 mi, while the Tesla is not as good at 33 kWh/100 mi. I expect this is because the Bolt’s PM AC motor is more efficient than the Tesla’s AC induction motor. And the Tesla now has dual motors and all-wheel drive.

If you want to be technically correct, you also must take into account the efficiency of the on-board charger/converter (or the external converter for high-power DC charging). This can be as high as 95%, but isn’t always that good. Newer converters with silicon-carbide transistors might be even better.

So I’m sure you will be very happy with your new electric vehicle, just be careful about when and where you charge it.

A Bit of Electric Car History

The Morrison Electric is said to be the first American electric automobile. It was produced by William Morrison in 1887 in Des Moines, Iowa. Morrison was an electric battery whiz kid. He installed his storage battery and a motor in a carriage built by the Des Moines Buggy Co.

In 1890 Morrison built a second electric automobile that was quite successful. A total of about 12 were made. The second-generation Morrison Electric had 24 storage battery cells mounted under the front seat. The batteries had an output of 112A at 58V and took 10 hours to recharge. Each cell weighed 32 pounds. The motor developed about four horsepower and was mounted beneath the carriage and geared to the rear axle. The speed of this electric car ranged from 6 to 12mph. A range of about 100 miles was obtained with one charge.

By 1900, electric cars were at their heyday, accounting for around a third of all vehicles on the road. During the next 10 years, they continued to show strong sales. In 1910 90% of the cars in big city taxi fleets were electric.

Chargers for their lead-acid batteries could be found at dealers or installed in the home garage. The chargers used mercury-arc tubes to rectify 110 or 220V AC and transformer taps to set the correct charging voltage.