Power design can be time-consuming and resource-intensive. That's why having an accurate power circuit design tool can be such a time-saver. Maxim recently re-engineered the EE-Sim DC-DC Converter tool, which power designers of all expertise levels can use to quickly create and simulate complex circuits.

Since I work closely with Maxim customers, I get a front-row seat into the design challenges they tackle and how tools like EE-Sim can help. I wanted to share some use cases here that illustrate how the tool can save time and effort. 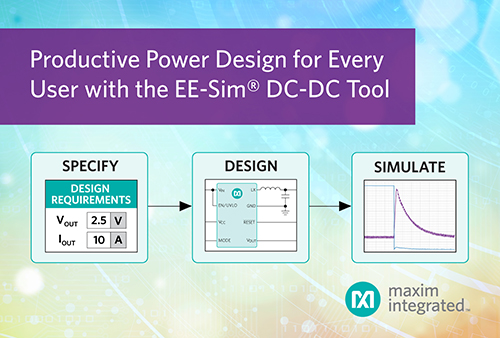 Revamped for greater ease of use, the EE-Sim DC-DC Converter Tool can save hours in design time.

An engineer at one cloud and data storage company needed to design a capacitor-based backup for an application in order to provide the processor enough time to back up the cache and other critical data. In doing so, he needed to create 48V from 12V to charge up a large capacitor, which was being used to power a buck regulator. His primary concern was ensuring that he could keep the input current to the boost regulator fairly constant. Using the EE-Sim DC-DC Converter tool, I performed some online simulation of the MAX17498 in discontinuous inductor current mode (DCM), which lowers the inductor value while allowing for larger peak currents. My colleague did some simulation using our offline tool and implemented an input filter using a 10uH inductor. We were able to show fairly constant input current by adding an input inductor in conjunction with the soft start and input filter running in DCM mode. We set the soft-start time and charged the COUT at a rate that allowed us to keep the input current below the requested 10mA. To smooth out the input current, we needed an input LC filter. Since we were striving to limit the input average current to 10mA at 12V input, we limited the maximum input power to 120mW.

For a Fortune 100 company that wanted to replace an older switching regulator with the MAX17244 synchronous buck converter, I pointed the customer to EE-Sim to modify their evaluation kit based on the resulting simulations. Testing went well on this project.

Finally, I'd like to share an example of how the EE-Sim offline simulation engine helped a customer who wanted to design a peak detector. A colleague sent me a neat circuit using a comparator he simulated using modulated sine wave to demonstrate peak detecting on the waveform envelope. I modified it slightly and demonstrated this to my customer. While, in the end, he didn't need a peak detector in his design, he was impressed that the offline tool could perform limited SPICE simulations.

These are just a few examples of the EE-Sim DC-DC Converter tool in action. If you're spending more time or effort than you can afford on your power designs, this free tool is certainly worth using to save on both.