One trillion smart, connected devices. What will it take to get there? And do we really need or want this to happen?

It is a staggering number, for sure. Consider this: the world has about 3.04 trillion trees—imagine placing sensors on a third of them. In a five-minute newscast, a newsreader reads about 1,000 words, so a trillion-word newscast would take 6,000 years. Yet this projection of one trillion things is one that Arm is not only making, but also developing its solutions to support and enable. While speaking earlier this year at Mobile World Congress, Masayoshi Son, chairman and CEO of Softbank (which now owns Arm), said that Arm will deliver about one trillion chips for the IoT over the next 20 years.

At this year’s Arm TechCon, many of the keynote talks centered around this road to one trillion devices. In her talk on October 24, Stacey Higginbotham, technology journalist and internet of things (IoT) expert, examined why the IoT is so hard. “None of this is going to be easy. Technology revolutions do not happen overnight, they take decades,” she said.

Remember when the iPhone was introduced 10 years ago, Higginbotham asked the audience at the Santa Clara Convention Center? That introduction brought forth a host of questions we never had to answer before. Would it be okay to text during a meeting? Watch a funny cat video at the dinner table? Today’s questions seem more urgent and all-encompassing, and their answers will impact all of us. Who makes decisions about all of the data collected? Who is tracking people? Who gets to decide what matters? Who enforces things—and what happens when things break down? These are all difficult questions that can take a long time to percolate through society and get resolved, she noted.

Once we get to that one trillion mark, the infusion of intelligence and connectivity into an array of applications is sure to have a profound impact. Already, a startup called Power Ledger, a peer-to-peer energy-trading platform in Australia, is utilizing the blockchain to allow residents whose homes are equipped with connected meters to sell their surplus solar power directly to neighbors. In the area of healthcare, we could see more solutions that predict various health conditions. NASA, for example, is currently working with the government of Peru to use satellite data to predict malaria outbreaks. In agriculture, we are starting to see the use of computer vision to regulate the use of pesticides and fertilizer, allowing more targeted applications of both. These are just a few examples of how the world is already changing—and a glimpse into what’s to come. 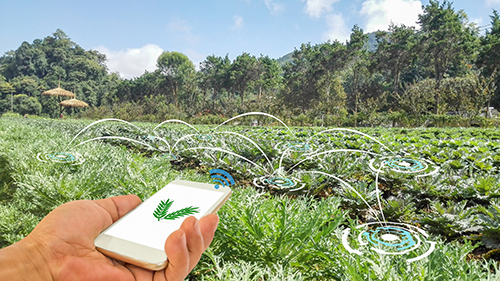 The use of sensors in farming can help farmers better target pesticide and fertilizer usage.

Bringing Together the Best of Humanity and Computing

As engineers create a new connected world, Higginbotham said, it is much like the formation of a new ecosystem which, ideally, harnesses the best parts of humanity and of computing. Doing so, she explained, involves tackling challenges in some integral areas:

Higginbotham closed her talk with this call to action: Adapting to this sort of world will take time, but must be done in a way that respects human creativity and the power of computing.