Engineering ingenuity really shines when a technically complex product is simple to use. Such is the case for the versatile and durable iButton®, a chip enclosed in a stainless steel can. While its roots go back about 30 years, the iButton continues being integrated into an array of applications. Orthotics residents, for example, are including it on braces to monitor patient wear time. Pharmaceutical companies use it to monitor temperature-sensitive medications while they’re in transit, overlaying this information with location data to pinpoint any problem spots. Food supply companies do the same with perishables. A zoo in Dallas, Texas, even had an elephant ingest one in order to log temperatures along the animal's intestinal tract.

There are now more than 20 iButton products in the family, all designed to deliver or record data where other products can't. The devices can track temperature and humidity, provide access control and asset tracking, and support electronic cash transactions. After some local university hospital residents visited Maxim’s San Jose headquarters to learn more about the iButton for their orthotics application, I wanted to learn more about the origins of these tiny devices. So I spoke with Hal Kurkowski, one of the iButton’s inventors and now an executive director in Maxim’s Micros, Security & Software Business Unit.

It all started back at Dallas Semiconductor (which Maxim acquired in 2001), whose product portfolio included non-volatile static RAMs. In traditional technologies that store data, the write sequence typically takes a lot longer than the read sequence, which is problematic for certain types of applications. Borrowing from a product developed by its founders, Dallas Semiconductor engineers created battery-backed static RAMs, where the read and write sequences are in sync and battery power preserves the data while the chip is powered down. An offshoot of this RAM product (a portable token) became a forerunner of the iButton and of smartcards. This token functioned like today's USB dongles, enabling data exchange between it and a host computer. The designers used the pins of a dual in-line package (DIP) to provide the electrical connection to the chip inside the token. However, these pins are very fragile, affecting the utility and reliability of the tokens, Kurkowski explained.

Around the same time, the company was developing the 1-Wire® serial protocol, which provides low-speed data, signaling, and power over a single conductor. Integrating the 1-Wire protocol into the token took it a step closer to today's iButton. But the engineers had to resolve the reliability issue. That's when they looked to the lithium-ion coin-cell battery industry. To talk to the chip inside the token, you basically need one contact plus one ground, much like a battery. So, the engineers thought, what if they could take the chip out of the token and place it into a coin-cell container instead? The engineers went on to place a tiny PCB containing the chip inside a stainless steel can, providing a more rugged enclosure. The 1-Wire protocol provided the means to communicate with and power the chip inside the coin-cell container. For products that required non-volatile read/write memory, a real-time clock, or a temperature data logger, a small battery was added inside the can to provide the necessary onboard power source. 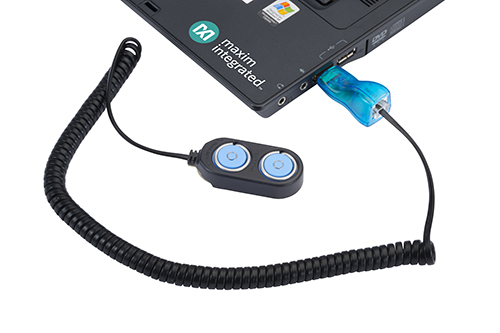 The data captured by iButtons, which can be mounted on virtually any object, can be transferred to a computer for review and analysis.

Complex Chip, But Easy to Use

There were still enhancements to be made. As Kurkowski explained, it's difficult to attach anything to the smooth coin cell-style casing. Double-sided tape or glue, after all, aren't very practical for a device that could last up to 10 years and be used in harsh environments. The engineers opted to design flanges around the bottom of the can and a mechanical crimp ring on the front so that the iButton can be held mechanically on an end product. "Now we had the ability to put any functionality we wanted into the chip. It could be a memory chip, a real-time clock, a temperature measurement chip" Kurkowski noted.

As the iButton developers created different variations of the product, they kept the shape of the device consistent for ease of use. One set of probes and readers work with any type of iButton. Users can easily set various parameters like data recording frequency, and data can be downloaded to a computer via an app. Thermochron iButtons are the temperature measurement devices, equipped with a chip, a battery, and a real-time clock (RTC). The iButton Hygrochron temperature/humidity logger is even more impressive from an engineering standpoint. iButtons are generally completely sealed, but this one needs access to ambient air. To provide access, the engineers placed a tiny hole at the top of the button and a humidity sensor right underneath, sealing the rest of the device to protect the other electronic components, said Kurkowski.

"One of the neat things about the iButton is, it has very little thermal mass so the response time is very fast," said Kurkowski. "Also, the device lasts for 10 years or a million temperature conversions—whichever comes first."

Creating the iButton clearly took some ingenuity, creativity, and the ability to bring together engineering efforts that had been done separately. The engineering team also looked to work completed in other fields, like coin-cell batteries. Because iButtons are of similar shape and size, the team was able to tap into battery manufacturing know-how to produce its devices.

"In a lot of engineering, what you want to do is look and see if someone has already solved the problem because you have enough problems to solve," said Kurkowski. "You want the end product to be unique and novel and hard for somebody else to copy. But, on the other hand, you don't want to invent everything to get from A to B, so you look at what hills have already been conquered by other engineers."

Applications for the iButton are limited only by the imagination. Learn more about the devices, including related software resources and accessories, from the iButton product page.