When you rely on a smartwatch to manage your appointments, review messages, and track health parameters, you'll want the device to run reliably over the course of each charge. It's a hassle to have to scramble for the charger more often than you expect—especially if you're out and about. As with any low-power electronic product, however, the device's compact form factor will limit its battery capacity.

How can you design a wearable, hearable, or other space-constrained IoT product to deliver both the rich features and the long battery life that consumers expect?

These challenges call for a unique power management solution, like a power management IC (PMIC) based on a single-inductor, multiple-output (SIMO) buck-boost architecture. While a traditional switching-regulator topology requires a separate inductor for each output, a SIMO PMIC provides a single inductor that supports three output channels. As Mital explained, any time the voltage of an output channel falls below a specified threshold, a flag is raised to indicate that the channel needs to be serviced. The controller builds energy in the inductor until the inductor current fits the programmed current limit and then transfers that energy into the output capacitor. Channels do not have to be serviced in any defined sequence. The load capability is the sum of all currents for all outputs combined.

As an example of a SIMO PMIC that addresses the design challenges of small, low-power IoT designs, Mital highlighted the MAX77654. The MAX77654 is an ultra-low-power PMIC with a SIMO buck-boost, two 100mA LDOs with ripple rejection, and a power-path charger for small Li+ batteries. Mital explained how the PMIC could provide a "one-stop power solution" for True Wireless Stereo (TWS) earbuds (Figure 1). Such earbuds are highly advanced, often featuring additional microphones for active noise cancellation, biometric sensors, and real-time language translation in a tiny form factor. "It becomes extremely hard for a discrete or a semi-discrete power solution to meet these requirements," said Mital.

A TWS earbud system needs to deliver long battery life, support multiple highly efficient power rails in a small PCB footprint, and boast a power audio module that doesn't affect audio performance. A SIMO PMIC such as the MAX77654 addresses these needs. The device provides 91% efficiency at VOUT (1.8V) with just 0.3µA shutdown current and 6µA operating current in a 29.7mm2 total solution size. The device has demonstrated the ability to power an ultra-low-noise audio codec, increasing battery life by up to 20% without affecting audio quality.

During the webinar, Wong discussed how a SIMO PMIC meets the needs of applications including smart glasses (Figure 2). Smart glasses consist of a microcontroller, a vibration motor, Bluetooth, and multiple cameras, all on a thin PCB strip situated on the handle of the frame. A SIMO PMIC such as the MAX17270 nanoPower SIMO buck-boost converter can serve as an efficiency booster in series with an LDO to power three rails of the camera module for the glasses (1.2V for serial communications, 1.8V for digital logic, and 2.5V for analog circuitry). While a discrete approach would require three buck regulators, three inductors, an LDO, and eight capacitors (15 components in a 24.59mm2 solution size), a MAX17270 solution would require only the one device plus an LDO, an inductor, and seven capacitors (10 components in a 13.68mm2 solution size).

The picture quality of the smart glasses is dependent upon the ripple of the camera power supplies. To reduce output voltage ripple, Wong noted that a programmable inductor current limit feature enables SIMO outputs to power rails that are sensitive to very low ripple (<20mVp-p). The inductor peak current limit can be changed via I2C to reduce the output current ripple to under 20mV, he explained. 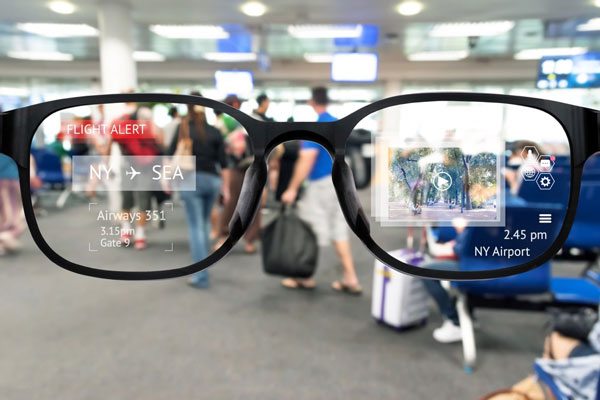 Mital concluded, "If you're looking for a power solution with a tiny footprint, less external components, and that is highly efficient to extend your battery life, evaluate the SIMO PMICs."