Capacitors, with their ability to store charge and deliver it quickly on demand, are essential components in power conversion. Output capacitors readily supply a sudden load increase, while the voltage regulator control loop reacts slowly to the sudden demand. Input capacitors present the power source with a smoother load by averaging the voltage regulator's current peak demand. Supercapacitors complement ordinary power sources like batteries in supplying fast varying loads, which the battery would be unable to supply due to its high impedance. And supercapacitors can replace backup batteries in low-dissipation applications in which typical power outages last from a few seconds to several hours.

Ordinarily, capacitors are paralleled to increase capacity. In the supercapacitor cases mentioned above, if its voltage rating is lower than that of the power source, two in series may have to be used to stand the voltage. In networked capacitors, the redistribution of charge and the conservation of energy leads sometimes to counterintuitive results.

In this Power Play blog post, we will play (pun intended) with up to three capacitors, identical in value (C), by connecting them in various configurations, to see how charge and voltage redistribute in the given ensemble. We will then extrapolate these findings to batteries, which will help us better understand the use of batteries in series and in parallel in portable devices. 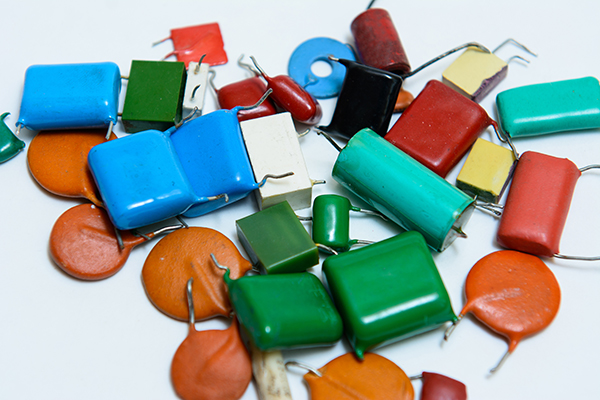 Figure 1. The redistribution of charge in networked capacitors provides a clue into how batteries used in portable devices might behave.

In Figure 2 we have a single capacitor charged at a voltage V. 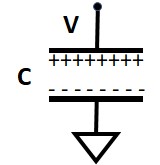 The capacitor's charge is:

Charged with a constant current I, the capacitor's voltage rises as

and the energy rises as

. Integrating over the charging period T we have 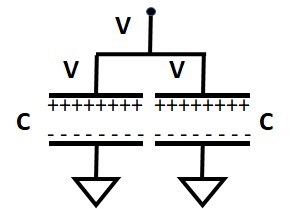 The ensemble of two identically charged capacitors in parallel will quite intuitively exhibit the same voltage V, with double the capacitance, charge, and energy: 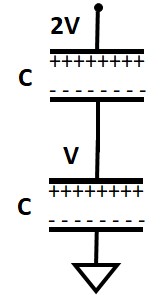 This is the first interesting result: the ensemble total charge is identical to the charge of each capacitor. A visual interpretation, looking at Figure 4, is that the negative charge on the top capacitor neutralizes the positive charge of the bottom capacitor and the resulting ensemble charge is unchanged. However, the voltage is doubled, so we get double total voltage in exchange for halved total charge. Now the energy:

Naturally, the energy is conserved. The result for the charge is less intuitive until you think that the charge is a still photograph in time of the current and the current in a series circuit must be the same in every component in series.

Capacitors of Different Values in Series

Now let's see what happens if two pre-charged capacitors, each at a voltage V, are connected in series. For simplicity, one capacitor is C and the other is 2C, the latter represented as two capacitors in parallel each of value C (Figure 5): 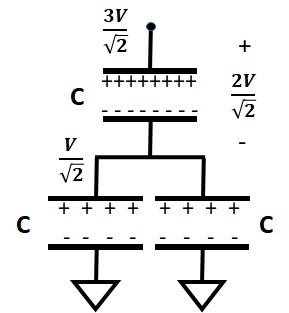 The total initial energy after assembly must be the sum of the energies of the three capacitors unassembled:

The triplet capacitance can easily be calculated to be:

And by substitution into the ETRIPLET equation we obtain the value of VTRIPLET:

Compared to two capacitors in series (2V) the total VTRIPLET voltage is:

In other words, a 33% increase in energy in this configuration produces only a 6% bump in total voltage.

By applying the total voltage VTRIPLET to the capacitive divider, we can easily find the intermediate voltage across the bottom and bottom capacitors:

As expected, the top capacitor has twice the voltage of the bottom capacitors since it has double the impedance. The top capacitor gains voltage compared to its initial unconnected value, passing from V to

effect across the top capacitor.

Now we can calculate the energy and charge distributions in each of the three capacitors:

Each bottom capacitor will have half the charge of the top capacitor:

And a quarter of the energy:

Summing up the three energies, we have:

Again, the energy is conserved so we did not make any calculation error.

And an energy of:

Not a lot of energy, but enough to give the load that extra kick in the initial phase when the power converter is unresponsive.

Two supercapacitors in series will double the voltage and energy storage and conserve the same 1mWhr charge of the single capacitor.

The considerations made above for capacitors in terms of charge redistribution apply to batteries as well. Two 3V Li+ batteries in parallel will yield double the capacity of a single battery, but in series they will conserve the same capacity at double the voltage. Interestingly, batteries are often qualified in mAhr and less often in mWhr. This may overlook the fact that a 10V battery that has the same mAhr of a 2V battery delivers five times more power, and power is the final currency in electronic circuits.

In this Power Play blog post, we reviewed some properties of charged capacitors connected in series and in parallel, with emphasis on charge/voltage redistribution with respect to the energy conservation principle. Two identical capacitors charged at the same voltage, like two identical batteries, double the available charge when connected in parallel, but not when connected in series. Capacitors in series scale up the voltage in inverse proportion to their capacitance. Some of these properties, in the case of batteries, help decipher the real value of a battery, often incompletely defined in terms of mAhr, as opposed to the more useful mWhr.

For additional insights on capacitors, refer to the article, “No More Kneeling to Check Your Water Meter”. You might also be interested in the MAX8815A DC-DC step-up converter with 97% efficiency and 30µA quiescent current.