How a Small Schottky Diode Minimizes Noise in Synchronous Converters

How a Small Schottky Diode Minimizes Noise in Synchronous Converters

Every switching supply designer becomes keenly aware of the need to design for noise and the tug of war this has with efficiency, board space, cost, and development time. The body diode present in MOSFETs used in synchronous converters is a wonderful freebie—it provides the conduction path during dead time commutation. Also free is the noise it generates, which is not the kind of "free" we want more of. Let's look at what's going on, explore how a small Schottky diode can help minimize noise, and develop some understanding of when and how this technique would be helpful. 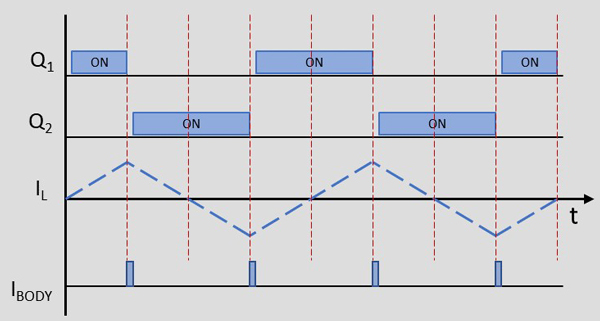 The standard buck converter topology is shown in Figure 1. A detailed DC-DC buck converter tutorial on its operation is available, and a view of the switching cycles is shown in Figure 2. Each time a switch is turned off, a dead time is introduced to make sure the first switch is fully off before the other switch is turned on. Current must keep flowing through the inductor during this dead time, and this current path is provided by the so-called body diode that is built into MOSFET Q2. There is a lot going on during this brief time, in particular at the moment when Q1 turns on, and this is where extra noise comes into play. 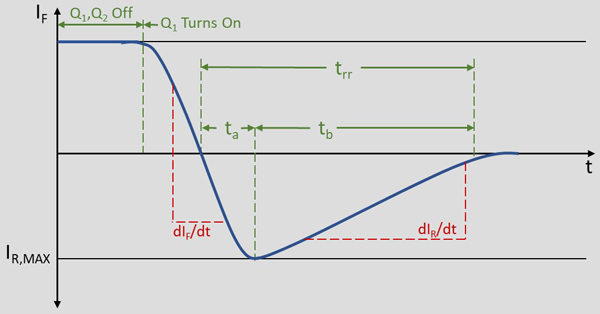 Figure 3 zooms in from just after Q2 is turned off until just after Q1 turns on. When Q2 turns off, current will continue to flow through the inductor due to its magnetic field collapsing. This causes voltage commutation (reversal) across the inductor, pulling the switching node (VSW) low until the body diode in Q2 turns on and conducts. Once the dead time has elapsed, Q1 is turned on. This causes the body diode in Q2 to become reverse biased. Body diodes are PN junction diode structures and as such have the unfortunate property of reverse recovery time. When the body diode is initially reverse biased, current flows in reverse through the diode. During the time period denoted ta the charge carriers in the PN junction are swept away. Then during time tb the reverse current falls to zero as the PN junction builds up a depletion region that can stand off the reverse bias. The current pulse that occurs during trr induces voltages in parasitic capacitances and inductances that can contribute significantly to noise in the circuit.

Several factors affect the characteristics of the reverse recovery curve. The largest factor is that body diodes have inherently long reverse recovery times. MOSFETs are optimized to reduce gate charge and on-resistance; their body diodes are parasitic PN structures that have slow reverse recovery compared to other diodes we use in power electronics. Recovery time is also temperature dependent, becoming far worse at higher temperatures. The rate of dIF/dt at the onset of reverse recovery is limited primarily by parasitic inductances in the circuit, which designers try to minimize. Lower parasitic inductances lead to higher dIF/dt, which results in higher |IR,MAX|. There is little (if anything) we can do to improve these factors, so we either accept the additional noise or we pull a better diode out of our toolbox.

This leaves a few open questions: when do we need to consider mitigating body diode noise, how do we select an appropriate diode, and how should it be physically implemented? Leaving the world of the theoretical and jumping feet first into the practical, we will think in terms of general guidance rather than precise calculations. The factors contributing to power dissipated during reverse recovery can provide some insight and is given by:

Where PRR is the power in watts, QRR is body diode reverse recovery charge in coulombs, and fSW is the switching frequency in hertz. QRR can be found in MOSFET data sheets, but is usually specified at room temperature and at a specific dIF/dt, which may not match your specific conditions. For example, QRR may be 2.5x the specified value due to the MOSFET being well above 25°C. Nevertheless, Eq 1 provides some general trends as does experience from the University of Hard Knocks. Body diode noise tends to be highest:

When selecting a Schottky diode, note that it carries commutation current for only a very short period of time (often 10s of ns) and will, therefore, see light thermal loading. A relatively small diode will suffice. The lowest possible lead inductance is a priority in Schottky diode selection. Small surface mount packages with flat leads are best. The diode should be placed as physically close to the MOSFET as possible to minimize parasitic inductance between the two. In fact, there are MOSFETs available with integrated Schottky diodes because parasitic inductance is detrimental. Finally, while the conventional buck converter topology has been used as an example in this article, these concepts apply equally well to other switching converter types.

Hopefully this post has provided an understanding of noise generated by the MOSFET body diode and how and why a Schottky diode can be used for mitigation. Having this tool in your toolbox just might help solve a challenging problem in your future.