The story of the birth of the electric car is also the story of a quite amazing confluence of inventions during the mid- to late-1800s. A time of really rapid change.

Let's say you are living in Philadelphia in the summer of 1898. It's a beautiful day and you just bought a wonderful new electric car. This car is great! It is quiet. It does not spew smoke all over the place like some other vehicles. It is easy to start and control. And, it's very fast—17mph. 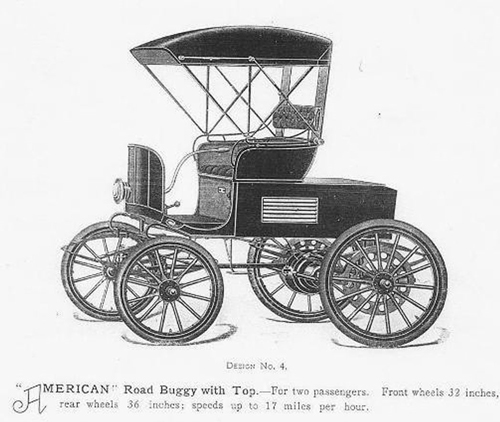 OK. The question is, how will you charge the batteries in your Road Buggy?

How Did We Arrive at the First Battery?

We need to back up for a minute. Of course, it all started with Alessandro Volta, who was born in Como, Italy, in 1745. In 1774, he was appointed as professor of physics at the Royal School in Como and in 1800 he invented the voltaic pile. Volta stacked discs of copper and zinc separated by cloth soaked in salty water. The Volta battery was a primary cell and its metal plates did not last a long time.

However, with Volta's device, a battery, the age of electricity could begin.

In 1802, William Cruickshank designed an improved battery using sheets of copper and zinc in a trough with an electrolyte of brine. Still, it was a primary cell that you threw away after a time. But it did allow experimenters in Italy, other European countries, and the U.S. to discover new electromagnetic properties.

A Better Battery and the Magneto/Dynamo

In 1831, Michael Faraday (1791-1867) demonstrated how a copper disc was able to provide a constant flow of electricity when revolved in a strong magnetic field: a generator.

in 1836, English chemist John Frederick Daniell invented a cell with a copper plate at the bottom of a glass jar, a copper sulfate solution, a zinc plate, and a zinc sulfate solution. The Daniell cell was a common way to power doorbells, telegraphs, and telephones before electrical generation was available.

In 1859, a most important thing happened. The French physician Gaston Planté invented the first practical rechargeable battery. This was a lead-acid battery. In 1881, his fellow citizen Camille Faure improved the lead-acid battery's electrodes and came up with the basic design still used in cars today. One record says energy density was 80-90Wh/L and specific energy, 35-40Wh/kg. Rechargeable batteries were often called accumulators at this time.

Note that the German doctor and physicist Wilhelm Josef Sinsteden is credited as the inventor of the basic lead-acid cell in 1850, though it was not a practical device. 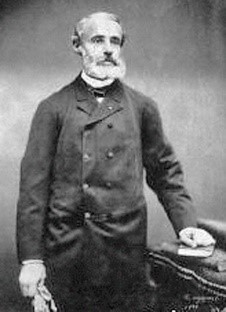 Sometime later, scientists heralded Planté's battery. It was envisioned that anybody who cared to put a windmill on his house or barn would be able, by means of this rechargeable accumulator, to light his dwelling at night, supply it with heat and hot water for washing and cooking, drive sewing machines and so forth, and "keep electrical carriages" that would run anywhere about town without horses.

An electric car would never be practical with a primary battery. With this, the rechargeable battery, we could imagine doing new things. But, obviously, one needed a way to charge it.

Back in 1832 a French instrument maker, Hippolyte Pixii, used Faraday's principles to build the first DC dynamo, or electrical generator. The device had a permanent magnet spun around using a hand-crank, producing small pulses of alternating current with each passing. To convert the pulses into direct current, Pixii developed the commutator. The Pixii Dynamo was patented, but it produced very limited power and was used for experimentation and for toys.

The Belgian researcher Zénobe Théophile Gramme, in 1857, conceived a DC dynamo capable of generating smoother and much higher voltages than the dynamos known to that point. In 1873, a Gramme dynamo was exhibited at the Vienna exhibition in Austria. It was the first generator to produce power on a commercial scale for industry. The fact that these were DC dynamos was very important, as there was no means of rectification and batteries demanded DC. It wasn't until 1902 that Peter Cooper Hewitt invented mercury-arc rectifiers.

Werner von Siemens, in 1866, invented the self-excited generator, a dynamo that could be set in motion by the residual magnetism of its powerful electromagnet, which replaced the inefficient steel magnet. This was an AC machine. Galileo Ferraris of Turin, Italy, is a great unsung hero of AC power systems. He produced the first AC motor without a commutator (induction motor). These two inventions don't relate directly to the automobile, but were integral parts of the electrical systems of the time.

Charles F. Brush installed his first commercial dynamo and arc lamp in Cincinnati in 1878 and before the end of 1881, Brush arc light systems were illuminating the streets of New York, Boston, Philadelphia, Baltimore, Montreal, Buffalo, San Francisco, and other cities. Arc lights were extremely bright and harsh and the bulbs were quite short-lived. It was not suitable for homes or businesses, except for large factories. The dynamo part of the lighting systems was driven by a steam engine, water, or wind. 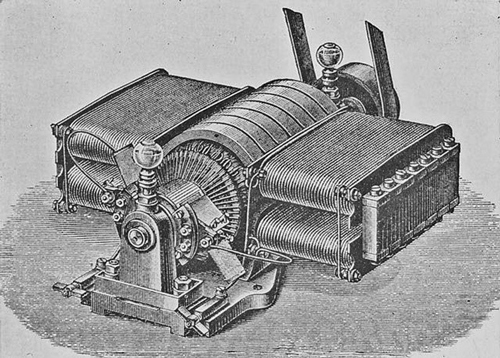 In 1879, after many experiments, Thomas Edison is credited with inventing the incandescent light bulb. This bulb could be used for about 40 hours without burning out. By the next iteration, his bulbs could be used for 1,200 hours. A great many people had experimented with light bulbs starting in 1840, but they were limited by available power sources and the inability to produce a good vacuum.

The pace of innovation was quite remarkable in the 1885 to 1903 timeframe. The first central power station in the United States was Edison's Pearl Street Station in New York City, which began operating in September 1882. It supplied 110V DC to 85 commercial customers near-by. Its six dynamos were driven by coal-fired steam engines, providing 175hp at 700rpm. Just five years later, in 1891, there were over 1,300 central power stations in operation in the U.S. with a capacity to light 3 million Edison light bulbs. The number of power plants grew to more than 3,620 by 1902. 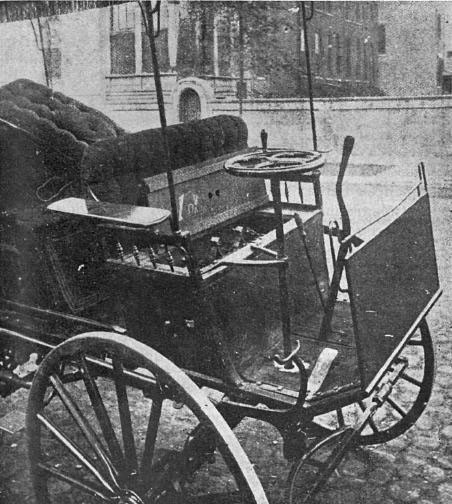 In 1890, a Scotland-born chemist living in Des Moines, Iowa, William Morrison, applied for a patent on the electric carriage he'd built in 1887 in a basement workshop below Lumbard Jewelry on Fifth Avenue. It appeared in a city parade in 1888, according to the Des Moines Register. Morrison developed the rechargeable battery for his vehicle, producing more energy per unit of weight than any other storage battery then available. The car's motor developed about 4hp and was mounted beneath the carriage and geared to the rear axle. A range of about 100 miles was obtained without recharging. Speed was adjusted by putting resistors in series with the motor.

In 1891, Morrison signed a contract with the American Battery Company operated by Harold Sturgis to manufacture and promote the Morrison battery. Sturgis was furnished one of the Morrison Electric cars as a demonstration mechanism and, in 1893, he exhibited his Morrison at the Columbian World's Fair in Chicago, where it was admired by many of the world's scientists.

So, back to charging that battery for your brand-new electric car. There were really three choices back in the day. You could buy a dynamo to put in your basement. It would need to be driven by a steam engine, water, or wind. Or, there were "stables" where you could bring your car to be charged. See an example of a stable in Figure 5. The stables had 4 to 18 stations and were much like today's electric vehicle "charge points." The stables also offered a service in a few cities where someone would pick up your car at night and return it all charged up in the morning. 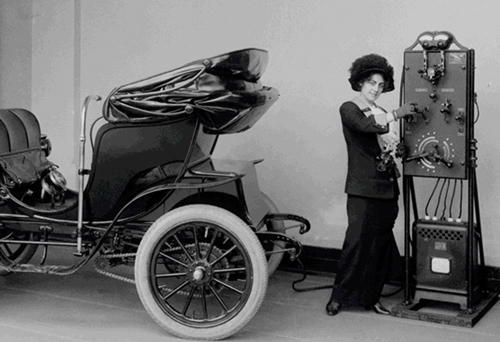 Figure 5. This photo from about 1904 demonstrates a stable for charging an electric car. (Image Courtesy of miSci - Museum of Innovation and Science)

Lastly, after about 1905, if you had electric service to your home, a mercury arc rectifier system could be installed, like that in Figure 6. 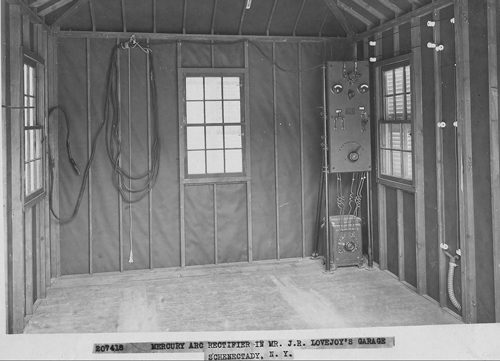 In 1894 the Electrobat by Henry G. Morris and Pedro G. Salom in Philadelphia was the first "production" electric car. The revised 1895 model weighed 1,650 lbs. with a 640 lb. battery and two 1.5hp motors driving the front wheels. It featured pneumatic tires and went 25 miles per charge at 20mph.

In 1898, Ludwig Lohner hired a bright, 23-year-old electrical engineer named Ferdinand Porsche to design a new electric car. His third car, the Lohner-Porsche Electric System built in 1900, had a chassis and body made of wood. One internal-pole motor was on each of the front-wheel hubs, with output per motor of 2.5/3.5hp and short bursts of 7hp. It used a 44-cell, 80V lead battery and operated for about three hours at a top speed of 28-36mph. Its overall weight was 2,657 lbs. Ferdinand and Ferdinand, Jr. (Ferry) would found today's Porsche company after World War II. 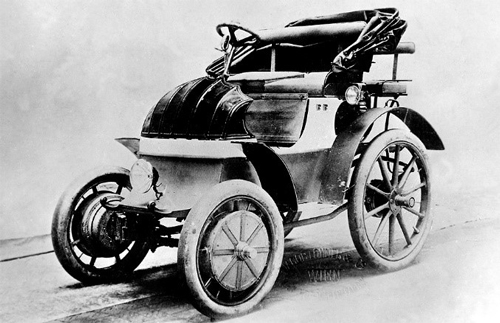 The Pace of Innovation

In 1893, William Morrison's first electric car was shown off in Chicago. Incredibly, in 1899, we had all these electric car manufacturers listed below:

I submit that the pace of innovation in 1895 may have been as fast as it is today—at least for automotive technology. I am curious about your thoughts on the matter. Please email me a quick note at jharris@lincolneng.com.