How to Use Your Battery Fuel Gauge to Build Customer Trust

How to Use Your Battery Fuel Gauge to Build Customer Trust

You've probably heard the news about smartphone manufacturers slowing down older models in order to accommodate aging batteries. The intention is to prevent phones with older batteries from shutting down unexpectedly.

While the intention is noble, the news has still led to customer backlash, largely due to customers not having access to detailed battery information, along with the lack of a clear explanation about the changes in how the old batteries were managed. This incident certainly shines a spotlight on the importance of presenting reliable battery information to customers.

Most mobile devices in use today use lithium-ion batteries, which degrade over time. They lose capacity and the internal impedance goes up. In an aged battery at heavy load, less capacity can be extracted compared to a light load. This is due to the higher impedance of an older battery versus a new one.

Integrating a fuel gauge IC into your battery-powered design provides a relatively easy way to manage an aged battery. Aside from the state-of-charge (SOC) data that many fuel gauges provide, modern fuel gauges such as Maxim ModelGauge™ m5 ICs also deliver data points such as:

You can decide which pieces of information to disclose based on your customers' expectations. This can help them better manage their battery-powered device and help build trust in your battery management strategy.

Let's take a look at each of these parameters in more detail. 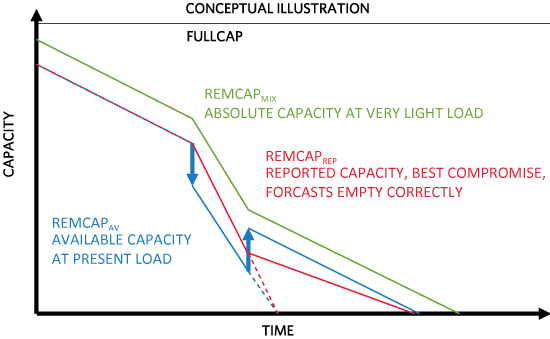 Figure 1. Available and reported remaining capacity provide an indication of battery life to the device user.

The age register in a fuel gauge is the percentage ratio of present full capacity compared to the original design capacity. This will typically trend down as the battery is used over time.

A timer allows the fuel gauge to track the age of the battery in terms of absolute time since the IC was connected to the cell for the first time. Some Maxim fuel gauges also periodically back up this information to the on-chip non-volatile memory as part of the learning function. For others, the host system can save this information periodically and restore it to the IC in case of a power loss.

Time-to-empty (TTE) under present load, as well as hypothetical load or power, is another useful parameter. Before starting a high-load session, the system can query the fuel gauge to see whether the battery can support the expected runtime for that hypothetical session to be successful. This measure can be used to prevent unexpected crashes by preventing that high-load session from commencing, especially in a low-battery condition. The system can instead proactively take power management actions to only allow light-load sessions and, perhaps, also communicate to the consumer that the battery is too low to enable certain high-load functionality.

The cycles register maintains the total count of charge/discharge cycles that have occurred on the battery. It accumulates fractional as well as whole cycles, just like the odometer on a car.

Cycle+ Age Forecast estimates the number of cycles the consumer can get out of the battery during its lifetime. The ModelGauge m5 algorithm monitors the change in cell capacity over time and calculates the number of cycles it takes for the battery capacity to drop to a predefined threshold. This forecast can be used to plan for a timely battery replacement, or take other battery management actions to extend the life of the battery by dynamically changing the charging profile.

The resistance register contains the calculated value of the average internal resistance of the battery. This register accomplishes this by comparing the open-circuit voltage against the measure voltage over a long period of time while under load or while charging. This value trends up as the battery is used over time.

To further enhance the user experience, a fuel gauge IC can offer some proactive battery management capabilities. For example, many Maxim fuel gauges include a feature called dynamic battery power, which enables better runtime by allowing optimal CPU performance. This capability accomplishes this by throttling the CPU just enough to keep the system from crashing. For example, in many single-cell battery applications, the system requires at least 3.3V to operate correctly. By configuring the fuel gauge for dynamic battery power, the system's loads can be controlled or limited to stay within the battery's capability and ensure that a minimum system voltage is not crossed until the battery is at a very low state, at which point the system can be gracefully shut down. So, the user gets extended runtime and can avoid unexpected crashes that stem from battery undervoltage condition. Without a function like dynamic battery power, system makers are essentially left with the unsavory option of throttling down system performance in a blind manner and, thus, risking customer backlash.

Some Maxim fuel gauges also have programmable, high-speed current comparators that monitor and control peak loads before they crash the battery. When tripped, these comparators send an alert to the host system, which can then take an appropriate power management action to dial down the peak loads/spikes. The programmable threshold can be set below the battery protector limits that would otherwise trigger a hard battery shutdown unexpectedly. These comparators can also be used to ensure that the system is complying with the dynamic power recommendations that the fuel gauge has provided to the host system. Ultimately, customers expect clear battery information, as well as potential performance trade-offs related to runtime and battery life. With fuel gauge ICs, you can deliver a wealth of reliable battery information to your customers. Maxim fuel gauges, in particular, provide a variety of tools that extend runtime while also enabling peak system performance, helping you build trust with your customers.