Buck (step-down) and boost (step-up) converters are the main staples of the DC-DC, non-isolated power conversion industry. They serve very different applications and purposes and, hence, a comparison seldom comes to mind and may seem like comparing apples to oranges. But performance parameters like accuracy, efficiency, cost, size, and noise are a common ground where, indeed, these two configurations can be compared. For this comparison we will use Simplis™ simulations. For simplicity, we will discuss an ideal operation in steady state when the closed-loop correction can be neglected, and the device can be adequately represented by a simplified power train driven by the chosen duty cycle, for example 50%.

In Figure 1, the buck converter power train is represented by a 12V peak-to-peak square wave generator with 50% duty cycle and 330kHz frequency. The LC filter is comprised of a 15µH inductor and a 30µF capacitor powering a 1Ω load. 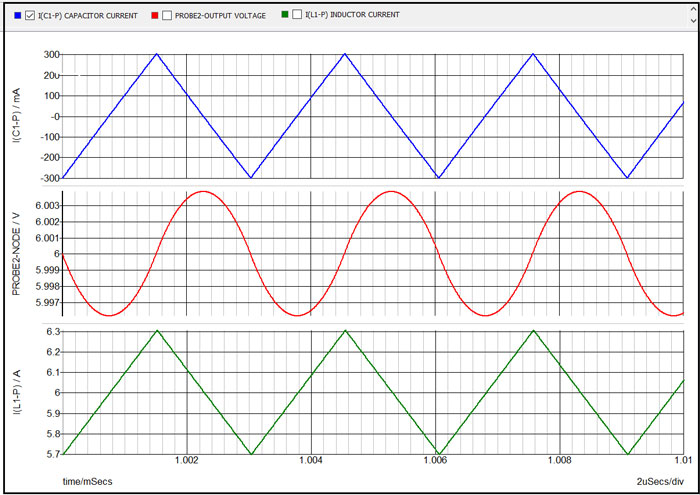 In Figure 3, the boost converter power train is represented by the classic MOSFET-diode-inductor ensemble. The MOSFET is switched with 50% duty cycle and the input voltage source V3 is set to yield an output voltage of 6V. Output voltage, inductor, and capacitor values are the same as in the case of the buck converter discussed above. In both cases the same LC passives deliver 6V to a 1Ω. 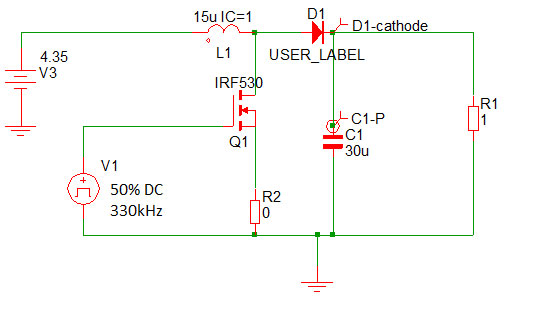 However, the presence of the rectifying diode here alters the electrical waveforms considerably. During the ON time of the MOSFET Q1 (50% of the period), the current flow to the output is interrupted and the load current must be provided entirely by the capacitor. This is fundamentally different from the case of the buck converter where the capacitor has to compensate only for the ripple current. The blue curve in Figure 4 shows the capacitor current to be now +/-6A (versus +/-300mA) in addition to a big negative current spike due to the diode bias reversal from +1V drop to -6V. The voltage ripple (red curve) is +/-150mV (versus +/-4mV) due to the huge current ripple. Finally, the inductor current is centered around 12A, twice the case of the buck converter, in order to supply the load with 6A and the capacitor with another 6A during the OFF time of the MOSFET. 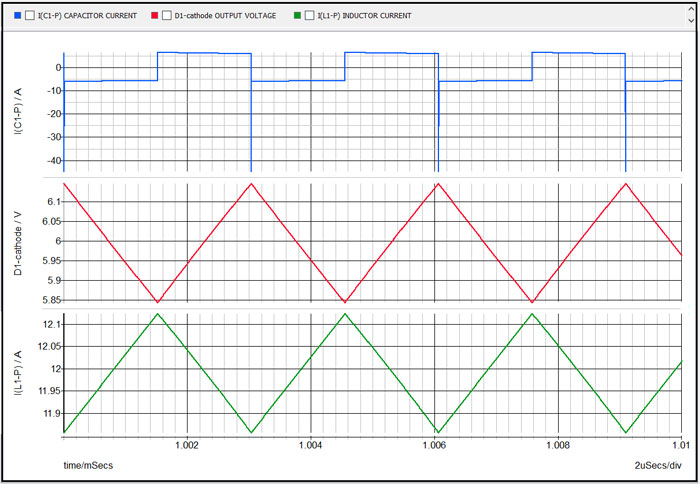 At equal load, the same LC filter has to work much harder in a boost mode compared to buck mode. In the boost case, the capacitor is switching 6A instead of 300mA peak and the inductor is carrying 12A instead of 6A average. This means that for good performance in a practical application, the passives in the boost converter case must be oversized compared to the buck converter, leading to a higher BOM cost and PCB size. Higher voltage ripple means lower output voltage accuracy, as the accuracy band provided by the customer is consumed by the voltage ripple. Lower accuracy ultimately means lower efficiency, as the voltage regulator output has to be set higher to assure the minimum voltage necessary to the load for proper operation. Higher capacitor current ripple and higher inductor current means higher Ohmic losses and lower efficiency due to the capacitor ESR and inductor ESL. Finally, a switched 6A current in the capacitor leads to worse EMI performance.

In conclusion, a performance comparison of a buck versus a boost converter shows the inherent superiority of the buck converter in BOM cost, PCB size, efficiency, accuracy, and EMI. On the other hand, if your voltage needs a boost, goodbye buck and welcome to the boost converter, which becomes the only game in town.

Nazzareno (Reno) Rossetti is an analog and power management expert at Maxim Integrated. He is a published author and holds several patents in this field. Reno holds a doctorate in Electrical Engineering from Politecnico di Torino, Italy.