Pulse oximeters noninvasively measure or continuously monitor oxygen saturation in arterial blood to ensure that there is sufficient oxygenation. Typical applications include people with respiratory problems who are under anesthesia, neonates, and critically ill patients.
In a pulse oximetry system, a clip with optical electronics is usually attached to a finger, toe, or ear so that light can be transmitted through the skin from one side of the clip and received on the other side with a photodiode. Good arterial blood flow is required to measure oxygen saturation. Most applications use transmissive optical techniques, but there are some applications that use reflective techniques.

Available in different shapes and sizes, pulse oximeters fall within three main categories.
At the high end are portable bedside patient monitors, which have a removable cable that includes a clip containing the optics used to measure oxygen saturation. These models are either dedicated to pulse oximetry or they monitor multiple vital parameters such as pulse, blood pressure, respiratory rate, and temperature. These high-end models demand high performance, with a low-noise signal path being the most important design parameter. Power is a secondary consideration, since the monitor is line powered most of the time and only runs off of battery power when the patient is mobile. Size is not a driving factor in these designs. 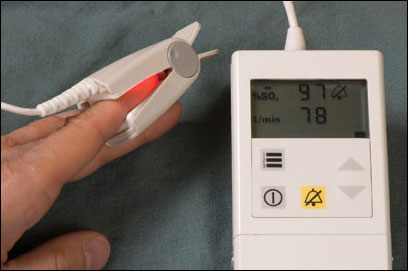 Mid-range handheld pulse oximeter.
Mid-range models are typically battery-powered handheld units with a removable cable. Performance is still important, but it needs to be balanced with size and power constraints. While handheld units run off of batteries all of the time, they have the space to include decently sized batteries. 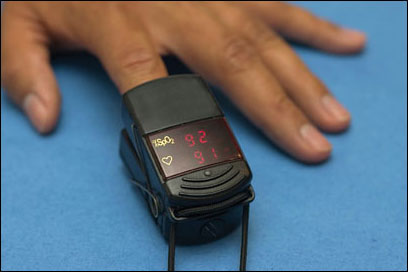 Low-end fingertip pulse oximeter.
At the low end are fingertip models, which combine the base unit and cable into a clip that is large enough to cover a finger and house the electronics and batteries. The small size means that performance may need to be sacrificed to preserve the small form factor and achieve the desired battery life.

Functional block diagram of a pulse oximeter. For a list of Maxim's recommended solutions for pulse oximeters, please visit: www.maximintegrated.com/pulseox.

Operation is based on the light-absorption characteristics of hemoglobin in the blood. Oxygenated hemoglobin absorbs more infrared light than red light, and deoxygenated hemoglobin absorbs more red light than infrared light. Thus, red and infrared LEDs in the oximeter alternately transmit light, and a photodiode receives the light that is not absorbed. The ratio of the red and infrared light received by the photodiode is used to calculate the percentage of oxygen in the blood. Based on the pulsatile nature of arterial blood flow, the pulse rate and strength are also determined and displayed during the measurement cycle.

Pulse oximeter sensor cables are removable and often disposable. The performance of the LEDs and the photodiode in the cable can vary due to either manufacturing tolerances or alternate versions of the sensor. The performance of the pulse oximeter can be improved by incorporating nonvolatile memory such as EPROM or EEPROM into the sensor cable to store calibration coefficients. This calibration data is used by the base unit to optimize the performance of the particular optical components in the sensor.
Because the electromechanical connector for the sensor cable typically has limited pins, system designers must add this calibration functionality with minimal interconnect. The simplest and most robust method to do this is to add a 1-Wire memory device to the cable connector. The 1-Wire protocol is a proven serial interface that uses only one connector pin to add calibration and other functionality to pin-limited designs.
Additionally, since each 1-Wire product is designed with high ESD protection built in, designers do not need to use external protection diodes.
An added benefit of 1-Wire memory devices is that they can be used to pass updates or new algorithms to the base unit, thereby providing a vehicle for in-field upgrades. They can also enable aftermarket control by allowing only approved sensor cables to be used. A unique 64-bit serial identification number is inscribed in each 1-Wire device. By writing to a lockout bit in the memory device, manufacturers are able to control how many times the sensor can be used before replacement is required. Replacement is driven by safety concerns and, more specifically, by patient contamination issues.

The red and infrared LEDs are driven alternately with a precise current; a quiet time occupies the interval between each alternating pulse. The repetition rate is not fast, usually well under 10kHz. The duty cycle is also low to keep overall power down and to allow ambient-light measurement while both LEDs are off. Most of the time the LEDs are at the end of a cable, so system designers prefer to drive the LEDs with current from the base unit. This approach reduces current errors and requires fewer lines in the cable, which, in turn, reduces cost and weight. The current used to drive the LEDs must have minimal noise because any noise in the bandwidth of interest will degrade the signal-to-noise ratio (SNR) of the system and decrease its ability to measure low oxygen-saturation levels in critically ill patients.
Off-the-shelf LED drivers are not typically used in this application for several reasons. It is difficult to accurately and precisely program the LED current with the required resolution, since the backlighting applications for which they are designed do not require high resolution. Also, if a switching topology is used for the LED driver, then the current noise will be too high. It is possible that an LED driver with a linear topology could be used, but this approach is not ideal due to the lack of resolution in programming the current.
The LEDs can be driven independently with a line from the base unit for each LED along with a shared ground. Alternatively, to save connector pins and lines, the LEDs can be driven in a back-to-back or antiparallel configuration. Figure 1 shows a method for driving the two LEDs in the cable using two digital-to-analog converters (DACs) to independently set the currents in the LEDs. The advantage of using two DACs is that they can be heavily filtered to reduce the noise because their output is relatively static. LED modulation is performed after the filtering of the DACs in this topology.

Figure 1. Simplified red and infrared LED bias and control circuit.
In all topologies, the operational amplifier used in the force-sense (FS) configuration needs to have low voltage noise and high enough bandwidth to modulate the LEDs. A single DAC can be used to reduce cost, but the performance may suffer if the noise increases. The peak current through each LED varies according to the characteristics of each LED and photodiode, and with the duration of each pulse. In practice, the peak current ranges from tens of mA to hundreds of mA across all oximeters, though individual meters will use a narrower range of currents.

A photodiode receives both ambient and modulated light from the red and infrared LEDs, and then generates a current that will be measured over time to determine oxygen saturation. The photodiode current is most often converted to a voltage using an operational amplifier in a transimpedance configuration, also called a transimpedance amplifier (TIA). The light received by the photodiode largely comprises ambient light that is not useful for determining oxygen saturation or pulse. The small amount of red or infrared light not absorbed by the tissue, venous blood, or arterial blood is the signal of interest and is buried in the ambient light.
Figure 2 presents a simplified circuit for converting the photodiode current to a voltage, for signal conditioning, and for analog-to-digital conversion. This circuit converts both the red and infrared signals together and then processes them in the digital domain. Alternate topologies exist where the red and infrared light are separated in the analog domain using synchronous demodulation. This technique allows the use of slow but high-resolution analog-to-digital converters (ADCs); however, it is poor at detecting motion artifacts.

Figure 2. Simplified photodiode receive path circuit.
The key specifications for the TIA are extremely low input current, input current noise, and input voltage noise, as well as high-voltage operation. These characteristics are necessary to maximize the SNR so that the small currents of interest can be measured amid the large ambient currents. High-voltage operation means that a larger feedback resistor can be used to easily amplify the ambient and received LED current before removing the ambient portion with a highpass filter. The remaining small signal of interest is then amplified to maximize the ADC's dynamic range. This gain stage should be programmable to compensate for changing environmental factors and the aging of optical components.
The key specifications for the ADC are high SNR and sample rate. The sample rate should be fast enough to capture the modulated signal and perform the required digital processing, which is different for each manufacturer.

If a bedside pulse oximeter is part of a multiparameter patient monitor, it does not require its own display because it uses the large color display incorporated in the patient monitor. Bedside monitors dedicated to pulse oximetry will usually have a medium-sized color display, or they can incorporate a touch-sensitive display to enhance the user interface and reduce the number of dedicated buttons. Handheld models have either a simple LED or LCD segment display or a more advanced dotmatrix LCD display. Fingertip units have the space and power only for a small and simple LED or LCD display. Simple displays can be driven by the display drivers found in many microcontrollers; dot-matrix or more advanced displays will require dedicated circuitry or a turnkey display solution. Backlighting is not required for LED displays; a few white LEDs can be used to backlight small LCD displays.

Most handheld and bedside models have the ability to interface with a computer. This data transfer is usually performed by a health-care provider or technician and not by the patient. Traditionally, the data interface has used RS-232, and the format has been proprietary to the manufacturer. Pulse oximeters are now migrating toward USB or wireless (Bluetooth®, Wi-Fi®) interfaces, and in the future oximeters will be able to securely transfer data to any device with these standard interfaces.

Audible alarms range from simple buzzers to speakers outputting multiple tones, levels, and patterns. A simple buzzer can be driven by one or two microcontroller port pins with pulse-width modulation (PWM) capability. More advanced audible alarms can be achieved by adding an audio DAC along with a speaker amplifier.

A pulse oximeter needs to generate multiple power-supply rails. Separate analog (3V) and often multiple digital (3V, 1.8V) supplies are required if there are low-voltage cores requiring their own supply. A separate clean supply for powering the LEDs (5V) is usually required due to the power, headroom, and noise considerations. A high voltage (+30V or -30V) is sometimes required for the TIA connected to the photodiode to increase the SNR and, in some cases, for the display.
Fingertip models use two primary alkaline batteries in the AAA form factor while handheld models use either two primary AA alkaline or rechargeable batteries. Both models require a combination of step-up switching regulators, low-dropout linear regulators (LDOs), and sometimes an inverting switching regulator. Bedside monitors are mainly line powered but will use lithium-ion (Li+) or nickel-metal-hydride (NiMH) rechargeable backup batteries. A regulated 5V DC voltage is usually supplied, so the power-supply design is different than the fingertip and handheld models. Battery charging and fuel gauges are needed for the models with rechargeable batteries, as well as authentication for safety and after-market control if the batteries are removable.