By: Reno Rossetti
摘要 : The electronics for automotive infotainment TFT-LCD displays must be minimal to limit PCB size and cost. After reviewing the shortcomings of a typical low integration solution, we introduce a newer approach using a PMIC with serial communication which tightly integrates the complex array of power rails that bias the TFT-LCD panel and powers its backlight. This new solution easily performs the required diagnostics to meet stringent ASIL-B safety ratings while reducing the PCB space needed for tight automotive applications.

With the rapid evolution of driver information technology, we can expect the automobile of the future to be equipped with multiple displays (Figure 1), possibly a dozen per car or even more. These “infotainment” displays will include an instrument cluster, a central information display, mirror replacement displays, and optionally, multiple entertainment displays for the rear seats.

While the size and resolution of automotive displays have grown, their electronics have become more complex yet limited in both PCB size and cost. One example of increasing complexity is found in the array of power rails that bias the TFT-LCD (thin-film transistor liquid-crystal display) panel and power its backlight. Another example is the stringent level of diagnostics required for display systems that relay safety-relevant information to the driver.

This design solution reviews the shortcomings of a typical power management solution for evolving automotive infotainment clusters. It then provides a solution to the size problem while facilitating the dynamic orchestration of the complex protocol required to operate the display while meeting automotive safety levels. 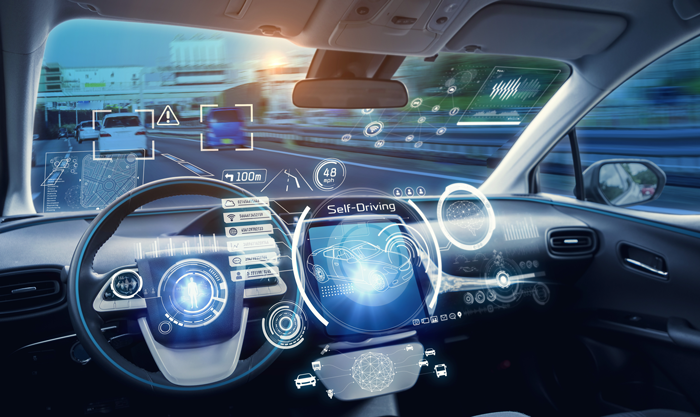 The standard display used in automotive systems is the active-matrix color TFT-LCD which has become ubiquitous due to its high brightness, high resolution, reasonable cost, and demonstrated reliability in the challenging automotive environment. Liquid crystals have the ability to change their transmissivity with applied voltage. Each sub-pixel in an active-matrix TFT-LCD display receives its bias voltage (which sets its transmissivity) through a TFT transistor that acts as a switch. A pixel is made up of three sub-pixels, one for each of the primary colors: red, green, and blue.

Figure 2 shows the main elements of the TFT-LCD display power system. A power-supply (PS) block TFT_LCD PS powers the source and gate drivers with all the power sequencing driven by a microcontroller. 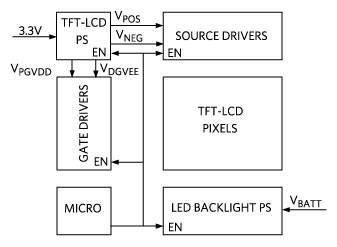 Figure 3 shows the complete set of voltage rails needed to drive a display, which requires bipolar supplies such as an LTPS (low-temperature polysilicon) display. In this example, the source driver is supplied with two voltages: VPOS and VNEG. The gate drivers are supplied with the voltages VGVDD and VGVEE, which are >used to switch on and off the TFT switches in each sub-pixel.

The source driver applies a voltage of between VPOS (+7V) and VNEG (-7V) to the sub-pixel (represented electrically by the capacitor, CPIX, and the storage capacitor, CS), thus setting its transmissivity. When the TFT is turned off (VDGVEE = -10V), the pixel retains its charge and “remembers” its transmissivity setting until updated during the next video frame. 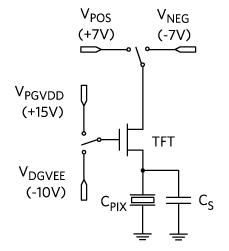 To avoid display “burn-in” and improve the lifetime of the liquid crystal material, the crystals of active matrix LCDs are driven by the inversion method, which alternates the polarity of the voltage applied to the sub-pixel with respect to a common backside electrode (shown as ground in Figure 3).

A typical TFT-LCD power IC (Figure 4) with VIN = 3.3V generates V>POS (+7V) with a boost converter and VNEG (-7V) with an inverter. Two charge pumps generate the positive (VDGVDD) and negative (VDGVEE) gate drive voltages. The four external diodes necessary for each charge pump are omitted for simplicity here but are included in the complete PCB layout of Figure 7 as one pair of dual diodes for VDGVDD (D3, D6 and D7, D9) and one pair for VDGVEE (D5, D6 and D11, D12). 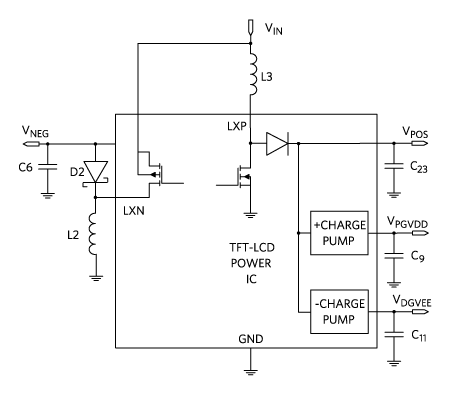 Since LCDs are not emissive displays, a source of white light is required to render the color image visible. Modern displays use white LEDs (light-emitting diodes) as the light source. The LEDs are placed on one side or on multiple sides of the display and illuminate the display area with the help of diffusors. The LEDs are usually arranged in “strings” that consist of multiple LEDs in series.

Due to the high forward voltage of white LEDs (3V to 4V) the total voltage needed to drive each string usually necessitates the use of a boost converter. Multiple strings are used to attain the required total brightness to render the display sunlight-readable. In Figure 5, a typical boost controller IC drives a matrix of LEDs for the TFT-LCD backlight. 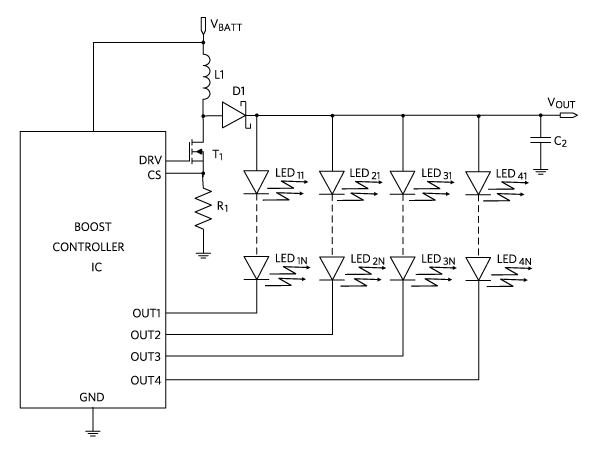 This low-integration solution adopts two separate integrated circuits and related passive components to power the TFT-LCD display and backlight but this is not optimal from the perspective of PCB space utilization and for complete control of all the voltage rails. In LCD displays, control of all the enable inputs of the various power supply ICs is necessary to attain the desired sequence and timing for the supply rails. Such control in a low-integrated solution requires a lot of GPIO pins on the microcontroller and increases software overhead.

Figure 6 shows an integrated solution. Both the TFT-LCD rails and the LED backlight controller are integrated in a single PMIC for tight control and reduced PCB space. 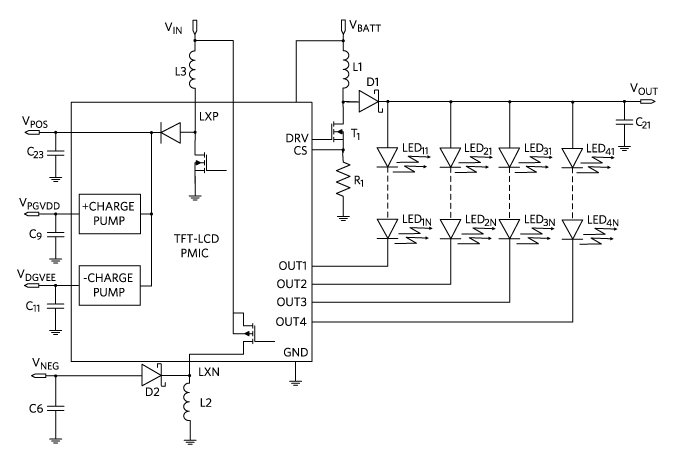 Parity bit or CRC (cyclic redundancy check) on any interface for error detection/correction.

The inclusion of these functions in a single integrated circuit enables the system to more easily reach the ASIL-B level of integrity.

As an example, the MAX20069 is a highly integrated TFT power supply and LED backlight driver for automotive TFT-LCD applications. The device integrates one buck-boost converter, one boost converter, two gate-driver supplies, and a boost/SEPIC converter to power one to four strings of LEDs in the display backlight. The default switching frequency of all the converters on the chip is 2.2MHz, which reduces the size of the external passive components and has the additional advantage of not causing electromagnetic disturbance in the AM radio band.

The PMIC integrates all of these functions in a small 6mm x 6mm 40-lead TQFN package with exposed pad. The startup and shutdown sequences for all power domains are controlled using one of the seven preset modes that are selectable through a resistor on SEQ or through the I2C interface. Alternatively, the individual outputs can be controlled using the appropriate register bits. Figure 7 shows the entire LCD-TFT power-supply system confined to a PCB area of only 3.45cm2. 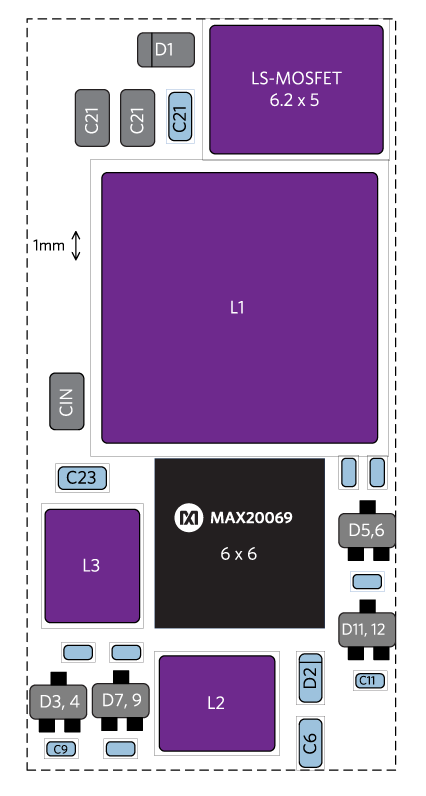 TFT-LCD displays are ubiquitous in modern cars and will be even more so in the car of the future. The electronics needed to drive the displays must be reduced to a minimum to limit PCB size and cost. This includes the complex array of power rails that bias the TFT-LCD panel and power its backlight. We reviewed the shortcomings of a power management solution with low integration and introduced a single-chip PMIC solution that tightly integrates the various voltage rails and serial communication. This new solution easily performs the required diagnostics to meet stringent ASIL-B safety ratings while reducing the PCB space needed for tight automotive applications.

A similar version of this design solution originally appeared in Electronic Design on December 11, 2018.