/
The SIMO DC-DC Converter is Your Audio Amplifier's Best Friend

The SIMO DC-DC Converter is Your Audio Amplifier's Best Friend

By: Zhan Wang
摘要 : SIMO regulators are ideal for hearable/wearable devices due to their optimized solution size, system efficiency, and versatility. Thanks to the adjustable peak inductor current limit of the SIMO regulator, the output voltage ripple can be controlled to less than 20mV to meet the requirement of sensitive audio headphone amplifiers.

Generally, traditional switch mode power supplies (SMPS) are considered to be very noisy compared to that of the low-dropout (LDO) regulators. The switching action associated with switching regulators generates noise and resulting harmonics, which can affect the overall system performance in audio applications. Thus, using SMPS for audio circuits presents design challenges. Although a filter or an LDO placed after a switcher may dampen the switching noise, the cost from the extra components, the increased solution size, and the decreased system efficiency are undesirable for the electronics manufacturers and the end consumers. In addition, small wireless audio devices have challenging size and battery life demands (Figure 1). A careful balance is required to achieve an optimal solution. 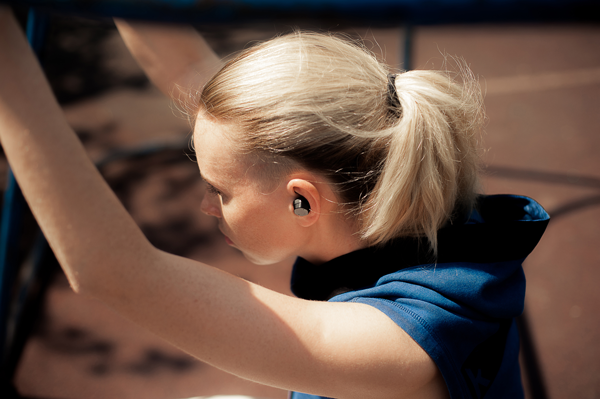 Figure 2 shows the typical power flow of a hearable audio device where LDOs are adopted for driving the noise sensitive components.

Because of the heavy use of LDOs, the associated lower efficiency causes significant heat dissipation and shortens battery life, thereby degrading user experience. With SIMO products, higher power efficiency can now be achieved while meeting the low-noise specifications of the toughest audio devices with minimal BOM addition.

As discussed herein, an ideal and innovative solution is a single-inductor multiple-output (SIMO) buck-boost regulator which implements three buck-boost regulators that share a single inductor. It drastically reduces the solution size while still providing high efficiency. Meanwhile, the programmable peak current limit allows adjustment of the output voltage ripple either in the factory or on the fly to meet the strict system requirements of sensitive audio amplifiers.

Figure 3 shows the simplified diagram of the SIMO topology. An illustration of the inductor current waveform of the SIMO operation is shown in Figure 4. The SIMO adopts discontinuous current-control mode. In the MAX77654 SIMO, it can operate in buck or buck-boost mode to support the wide output range from 0.8V to 5.5V. In buck-boost mode, for example, the inductor starts a cycle by building up current with M1 and M4 “ON” at the rate of VIN/L. When it reaches the corresponding peak inductor current limit programmed for the output rail being serviced, the current is subsequently delivered to that rail through the M2 and M3.x transistors. 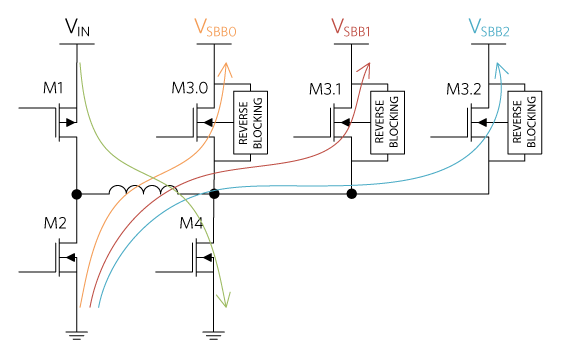 For switching regulators operating under discontinuous conduction mode (DCM), it is widely assumed that the large inductor current ripple in DCM creates large output voltage ripple, which is detrimental to noise sensitive applications. Fortunately, the programmable peak current limit of the SIMO restrains the inductor peak current and thereby reduces the induced output voltage ripple. Combined with the knowledge that low-load currents are common in ultra-portable applications, the peak current limit of each output rail of the SIMO can be either pre-programmed or adjusted to an optimized value to achieve lower output voltage ripple without compromising the output power.

As illustrated in Figure 4, the peak current limit bounds the inductor current ripple. With the same load condition and operation mode (buck/buck-boost mode), a lower peak current limit essentially reduces the amount of energy transferred to the output for each switching cycle of a specific output rail. This leads to an increased switching frequency for the rail and reduces the output voltage ripple. 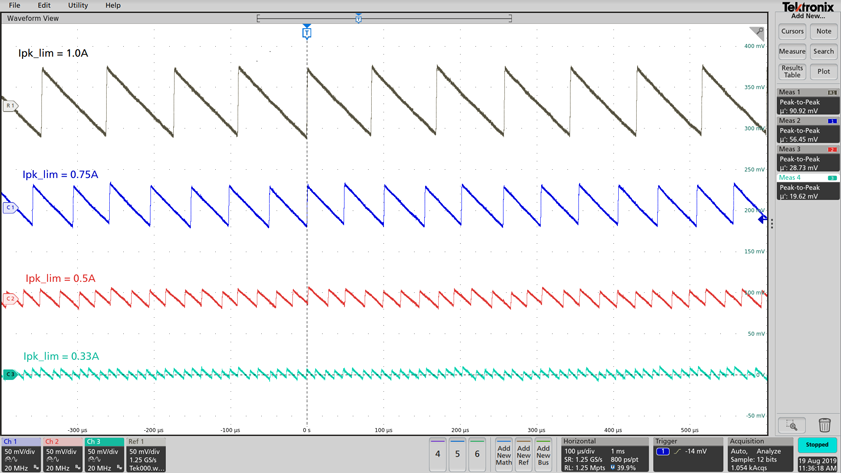 To demonstrate the superior performance of the SIMO PMICs for audio applications, spectral tests were conducted with the SIMO and a high-performance audio headphone amplifier. The test configuration and the in-band FFT results are shown in Figures 6 and 7.

Since Maxim’s innovative SIMO architecture operates in DCM mode, interference between channels naturally spreads out the switching frequency spectrum and results in the reduced likelihood of injecting a strong carrier when there is a signal on another channel.

With the help of Maxim’s unique SIMO architecture, power can be efficiently delivered in a tiny package while achieving longer battery life for portable devices such as audio devices. Meanwhile, the programmable peak inductor current limit enables adjustable output voltage ripple for each SIMO output independently. This output ripple can be reduced to lower than 20mV. In addition, because of the nature of Maxim’s DCM SIMO, the spectrum of the output voltage signal is inherently spread out without a distinct carrier frequency that would have been highly prone to coupling and mixing.

All these features offered by SIMO regulators result in a perfect combination of high system performance and small form factor. The family of SIMO regulators featured in this article address the unique challenges in designing a successful wireless audio device – with ultra-low quiescent current, high efficiency, compact size, and good noise performance.

A similar version of this design solution originally appeared in Power Systems Design on 11/02/2020.