Industrial motion control applications include many sources of noise. EMI can reduce reliability and accuracy in these circuits. Maxim Integrated has designed an optimized solution for reliable communication and signaling in these harsh environments.

EMI can dramatically reduce reliability and affect the performance of motion control systems. Industrial applications need to further be protected against high-voltage, potentially destructive events that can occur on production floors or in harsh environments. Some of these events include electrostatic discharge (ESD) and surge transients.

This application note describes electromagnetic compatibility (EMC) tests, including IEC 61000-4-2 ESD, IEC 61000-4-4 EFT, and IEC 61000-4-5 Surge, done on a high-speed isolated RS-485 data link using the MAX14435 and MAX22445 digital isolators and MAX22500E RS-485 transceiver. The schematic and layout files are available for this solution; however, Maxim Integrated is not selling assembled boards.

RS-485 transceivers are often optimized for robust communication in difficult environments. However, other low-power digital circuitry may be destroyed by the high-voltage and large switching current signals that may couple-in down the line. Digital and power isolation are often used to further protect sensitive digital circuitry from potentially damaging voltages/signals. 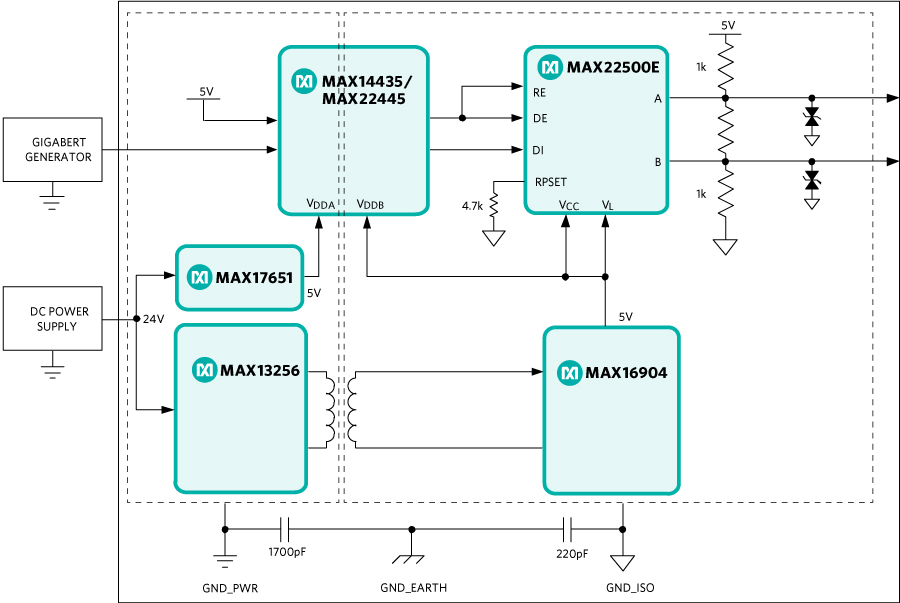 Figure 2 shows a picture of the test board. 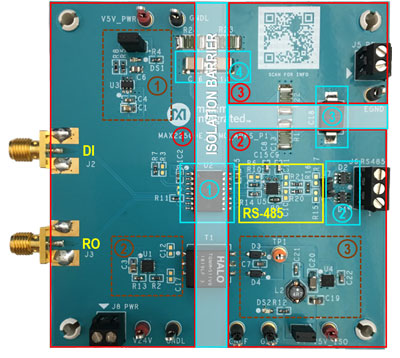 The test board has three isolated grounds (see Figure 2 in red):

Isolation and high-voltage protection are provided by the following devices (see Figure 2 in blue):

The MAX17651 low-drop linear regulator generates a 5V supply for the logic side of the on-board digital isolation circuitry.

The MAX13256 H-bridge transformer driver and MAX16904 mini buck converter are used to generate an isolated 5V for the MAX22500E high-speed RS-485 transceiver and the field-side of the digital isolator. The transformer driven by the MAX13256 provides up to 5kVRMS isolation between the 24V source and the isolated/field side of the board. The MAX16904 is used to efficiently step down the 24V voltage to 5V to reduce power dissipation during high-speed communications.

Two pin-compatible Maxim Integrated digital isolators were tested in this circuit: the MAX14435 (basic isolation) and the MAX22445 (reinforced isolation).

The ground planes under the A and B lines are pulled away to reduce stray capacitance and improve the signal at maximum speed.

Semtech RClamp1224S low-capacitance TVS diodes feature a maximum junction capacitance of 3pF (max, at 1MHz) and protect the transceiver from being destroyed during high-voltage events.

The test board features three isolated ground planes to protect the MAX22500E and digital circuitry during high-voltage events: a logic ground, field ground, and protective earth (PE) ground. High-voltage Y-capacitors and high-impedance resistors are used to connect these grounds to provide a return current path for the high-voltage transients and reduce stray switching currents and EMI that may be generated at the isolation boundaries. Maxim Integrated recommends placing the on-board TVS diodes (RClamp1224S) close to the RS-485 connector and creating a dedicated field-side ground path from the TVS diodes to the 220pF Y-capacitor to direct EFT burst energy to the PE without interfering with the rest of the field-side circuitry including the MAX22500E and the digital isolator.

Figures 3 and 4 show the test setup for the ESD, surge, and EFT/burst tests. Data was generated by the Tektronix® GB700T signal generator connected to a transmitter (Tx) board at data rates up to 100Mbps with the MAX22500E preemphasis enabled. Data was received by a receiver (Rx) board connected to the Tektronix GB700R signal analyzer for analysis. Although both the Tx and Rx boards are configured for half-duplex communication, data was passed from the Tx board to the Rx board only during testing.

As seen in the figures, cable shields were connected to the PE ground on each board and wide copper tape is used to connect the PE and cable shield to the metal plane. 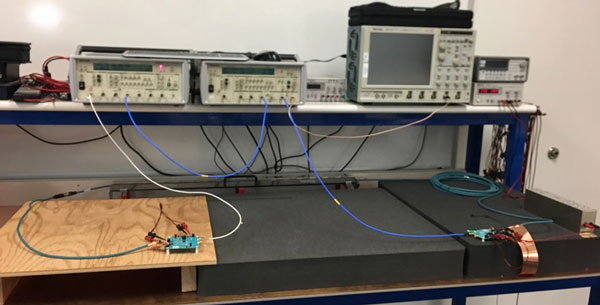 A Teseq NSG 438 ESD simulator was used for ESD testing.

Table 2 shows a complete list of equipment used for testing.

All tests and measurements were taken at room temperature (TA = +25°C).

The MAX22500E half-duplex RS-485 transceiver is optimized for high-speed (up to 100Mbps) operation over long distances. Integrated preemphasis functionality helps to reduce intersymbol interference (ISI) over long cables and increase signal integrity. Preemphasis reduces ISI by boosting the differential signal amplitude at every transition edge, counteracting the high-frequency attenuation of the cable.

Eye diagrams can be used to evaluate the quality of a transmitted signal. Eye diagram measurements were taken at the Rx board. A Cat6 cable (50m) was used to connect the Tx board and the Rx board, and PRBS data was sent at 100Mbps from the Tx board to the Rx board during testing. Data was measured differentially with 100Ω termination resistors at both ends of the cable. Measurements were done with preemphasis disabled (Figure 5) and preemphasis enabled (Figure 6). 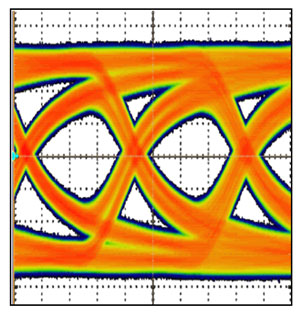 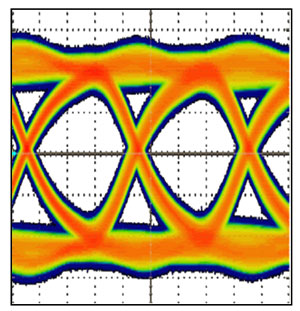 Line-to-earth Contact and Air-Gap ESD were tested on both the Tx and Rx boards. These boards were connected with a 20m Cat6 cable, and data was passed from the Tx board to the Rx board at 100Mbps with preemphasis enabled. ESD transients were applied directly to the A and B I/O pins on both Tx and Rx boards, and the ESD ground return was connected to the PE at the Tx board. Figure 7 shows a block diagram of the test circuit used to test the ESD performance of the Maxim Integrated solution. A BER < 1E-8 was required during the test to consider the result as a pass (performance criterion A). A BER > 1E-8, or device damage or reset during a pulse, was registered as a fail.

Test results are shown in Table 3. 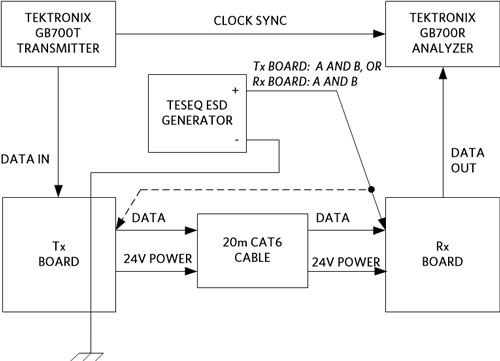 Electrical fast transient (EFT), or burst, testing was done using the Haefley high-voltage EFT generator and a large capacitive coupling clamp. The generator is connected directly to the clamp and set to generate high-voltage bursts for a given duration and repetition rate as defined by IEC 61000-4-4. The 20m Cat6 cable used to connect the Tx and Rx board was placed inside the clamp. The clamp was placed nearest the Rx board, with only ~1m of cable between it and the Rx board. Figure 8 shows a block diagram of the test circuit used to test the EFT performance of the Maxim Integrated solution. Pseudorandom bit sequences (PRBS) at 100Mbps were sent from the Tx board to the Rx board during testing. A BER < 1E-8 was required during the test to consider the result as a pass (performance criterion A). A BER > 1E-8, or device damage or reset during a pulse, was registered as a fail.

Test results for the Maxim Integrated solution are shown in Table 4. 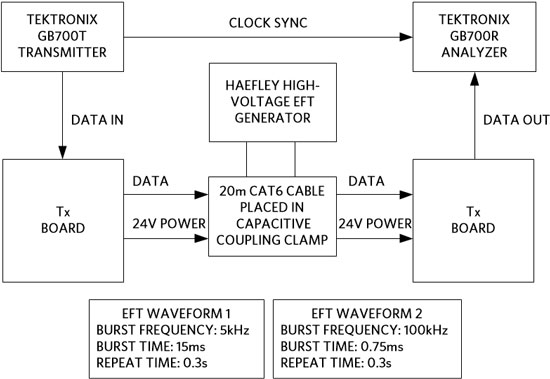 Figure 9 shows a block diagram of the test circuit used to test the surge performance of the Maxim Integrated solution. A BER < 1E-8 was required during normal operation to consider the result as a pass, although a BER > 1E-8 was allowed during surges (performance criterion B). Device damage or reset during a pulse was registered as a fail.

Test results for the Maxim Integrated solution are shown in Table 5. 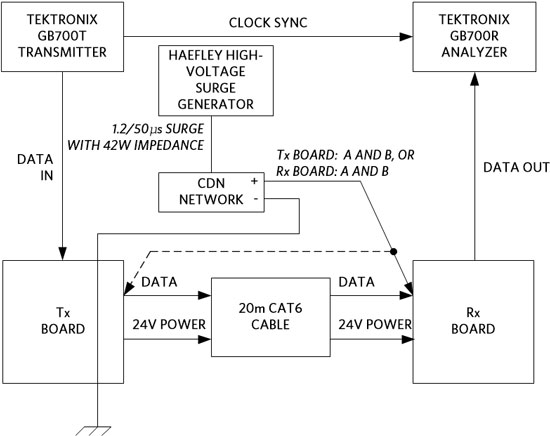 The Maxim Integrated circuit provides Level 3 protection for ESD and EFT with continued communication during the tests (performance criteria A, as outlined in the IEC standards).

The Maxim Integrated circuit provides Level 4 protection during surge events. Communication is temporarily lost during a surge event, but the circuit is not damaged and communication resumes when surge event ends (performance criteria A, as outlined in the IEC standards).