How to Reduce PWM-Related Acoustic Noise on MAX20444 Applications

This application note describes the root cause of audible noise which can arise when a MAX20444 4-channel backlight high brightness LED driver is operated at certain pulse-width modulation (PWM) dimming frequencies. Several countermeasures are proposed to mitigate this problem.

Pulse-width modulation (PWM) dimming is a widely used technique in LED backlight driver systems as it allows the shift in the light spectrum which occurs when the LED forward current changes to be avoided.

When dimming is implemented through PWM, the nominal current applied to the LEDs is switched on and off at a fixed frequency. In this way, the RMS and average current values become lower together with the brightness but, because the peak current driving the LEDs is always at the nominal value, the color temperature stays the same.

This application note focuses on the boost topology of the MAX20444 peak current-mode-controlled LED driver and on the acoustic noise issues which can be generated by a driving PWM signal. The MAX20444 offers many features such as the following: 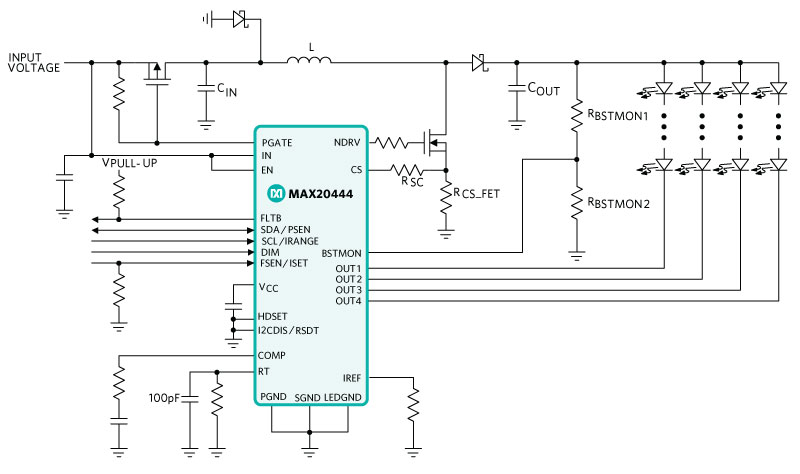 However, when PWM dimming is implemented, the pulsed LED current causes them to resonate mechanically due to the piezoelectric effect of the dielectric material (see Figure 2) and the resulting vibration is transmitted to the PCB surface.

The standard range of audible frequencies is 20Hz to 20kHz, though the range of frequencies individuals can hear is greatly influenced by environmental factors. While there is not a theoretical upper limit, the PWM dimming frequency used should never be lower than 100Hz to avoid visual flickering. However, it must be considered that the achievable dimming ratio lowers as dimming frequency increases, and, if the PWM frequency is within audio-frequency range, the sound can be perceived by the human ear. 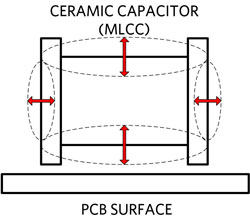 In many automotive applications, electrolytic or aluminum organic polymer capacitors, which do not show piezoelectric characteristics, are added to provide most of the output bulk capacitance. In some cases, the use of only ceramic capacitors is preferred due to cost or size constraints and when the need for noise reduction becomes critical.

Given that the ceramic section of the total boost output filter capacitance is mainly responsible for the audible noise and that this is effective in the 20Hz to 20kHz frequency range, the most obvious solutions are to either adopt a PWM signal out of the mentioned range or only use ECAPs, POSCAPs, or SPCAPs as output capacitors. When neither of these options is feasible, several countermeasures to mitigate this problem can be adopted.

Special ceramic capacitors made of low-distortion dielectric material which exhibit smaller deformation compared to general purpose ones, are available from different manufacturers (i.e., GJ8 series from Murata). Other ceramic capacitors do not transmit vibrations to the circuit board either because they are mounted on an interposer substrate (ZRA/ZRB series from Murata) or because they are kept "suspended" over the board's surface by metal terminals (KRM/KCM series from Murata or CKG series from TDK). Metal terminal capacitors offer the best results in terms of noise suppression. In general, it should be noted that noise suppression also depends on capacitor case size. A smaller case size tends to generate lower sound levels than a larger case size.

MLCCs tend to be more expensive, which prevents their wide use by end-equipment manufacturers. Because the origin of the noise is the interaction of MLCCs with the PCB, layout and mechanical setup adjustments can be effective even if standard ceramic capacitors are chosen.

Placing the output ceramic capacitors at the edge of the PCB can lower the sound pressure level. Alternatively, mounting pairs of identical components symmetrically on the top and bottom sides of the PCB can also help to reduce the noise level, because the two vibrations cancel each other out and the PCB stops resonating.

The residual noise can be further reduced if the mechanical coupling between the ceramic capacitors and the PCB is minimized. By milling holes into the PCB beside the solder points, the stimulated PCB area is reduced significantly. Figure 3 shows the marked holes in the PCB around one ceramic capacitor. 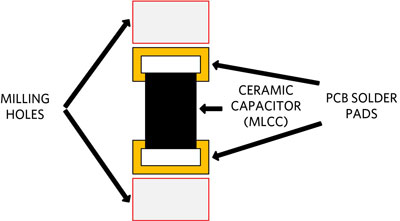 In general, acoustic noise can be quantified by measuring the sound pressure level. The object to be measured is set to the operating state inside an anechoic box, and a noise meter is used to measure the sound pressure level using a microphone. In addition, the sound-pressure-level frequency characteristics can be checked using an FFT analyzer to facilitate evaluation and solutions.

The output capacitance on a standard MAX20444 evaluation kit (EV kit) is composed of two 4.7µF ceramic capacitors in parallel with one 47µF electrolytic capacitor.

The acoustic noise produced by the three boards was evaluated using different PWM frequencies in the 1kHz to 3kHz range and by sweeping the signal's duty cycle from 0% to 100%.

It could be proven by a subjective analysis (i.e., direct listening) that the audible noise level was reduced on both the EV kit boards where the alternative configurations were implemented.

Without proper arrangements, the noise caused by the PWM dimming and the ceramic capacitors on the output of a boost LED driver is clearly heard up to a few meters away. By limiting the movement of the capacitors, by minimizing the resonating area of the PCB, and by selecting special ceramic capacitors, the noise is reduced to such a low level that the user needs to be as close as possible to the PCB to hear a very low residual buzzing.